Writing music and making himself recognized for it.
Tormenting Mozart.

Bring honor to God (formerly).
Kill Mozart and take credit for his work (succeeded in the former, failed in the latter).

Antonio Salieri is the villainous protagonist of the 1979 play Amadeus and its 1984 film adaptation of the same name. Based on the real-life famed musician of the same name, he is highly dramatized in both depictions of the life of Wolfgang Amadeus Mozart.

In the play, he was portrayed by the late Paul Scofield. In the film, he was portrayed by the Academy Award winning actor F. Murray Abraham, who also played Omar Suarez in Scarface, Bernardo Gui in The Name of the Rose, Ahdar Ru'afo in Star Trek: Insurrection, Cyrus Kriticos in Thirteen Ghosts, Grimmel the Grisly in How to Train Your Dragon: The Hidden World and Khonshu in Moon Knight.

An elderly Salieri is confessing from his apartment directly to the audience to having poisoned Wolfgang Amadeus Mozart with arsenic and narrates his life story-while accompanied by two Venticelli. The plot is fairly identical to that of the film, though with various differences: one of them being that Salieri dresses as a hooded figure from Mozart's dreams when he requests he write the Requiem-instead of a costume he saw his late father wear. Salieri is married and has an affair with Katerina Cavalieri for several years to spite God-whereas he is celibate in the film. He also does not hire a servant girl to spy on Mozart as he did in the movie.

Towards the end of the play, Salieri finally reveals himself as the figure before Mozart once he is given the unfinished Requiem. He tells him God does not help others and that Mozart should just die. Mozart then goes into a breakdown, starts singing, and claims to see his father. Salieri leaves before Constanze arrives and Mozart dies in her arms. It is revealed that Salieri had been saying he poisoned Mozart so he could be famous to the historians for something. He tries to kill himself by slitting his throat, but he survives and his confession is met with disbelief by the audiences. He then absolves them of their mediocrity.

Antonio Salieri had always wanted to be a music composer like his idol, Mozart, a dream that his father (who wanted him to go into commerce) scoffed at. Salieri had a deep devotion to God and prayed to him that he would give him the opportunity to compose music and he would honor him in return by using this gift to bring him honor and glory. He then saw it as divine intervention when his father choked to death, because it meant he could follow his dream.

Years later, in 1791, Salieri is part of the cultural elite in Vienna and has been appointed court composer for Holy Roman Emperor Joseph II. Although Salieri admittedly felt the emperor had "no ear at all" in music, it did not matter to him because he was well respected and loved by others for his work. He wrote 40 operas alone and honored God in return by keeping his hands off women and teaching students (many for free) in music.

When Salieri hears of child prodigy Mozart coming to Vienna, he goes to a performance to meet him, thinking that his genius must be a gift from God. However, once he gets there and witnesses him fooling around with his girlfriend, Constanze Weber, he sees that he is a vulgar, irresponsible manchild. Later, when Mozart meets the Emperor, Salieri presents Mozart with a "March of Welcome" he had created. After hearing the march only once, Mozart plays it from memory, critiques it, and effortlessly improvises a variation. Salieri is thus humiliated in front of his peers and expresses anger towards God for the first time in his life.

Salieri's dislike for Mozart turns to hatred once the later has an affair with one of Salieri's pupils, Katerina Cavalieri, whom he was deeply attracted to. Salieri begins to lose his own sanity and begs God to send Mozart away for both their sakes. His jealousy increases when the Emperor considers Mozart for tutoring his niece in music, rather than Salieri himself.

Constanze meets with him to discuss giving Mozart the royal position, and shows him one of his own works without Mozart knowing. Salieri is both impressed and angered by how "miraculous" it is, especially given it is not a copy. He blackmails Constanze into coming back the following night to have sex with him, and in exchange he would give the position to Mozart. Debating whether or not she will really show up, Salieri prays that following night to God that he will give him the touch of true music, so he can know that God still loves him, and he will in exchange give the position to Mozart. However Constanze does in fact show up and takes off her shirt, but he has one of his servants show her out, humiliating her. He then renounces God for giving Mozart transcendent talent while ignoring him, and swears revenge on both Mozart and God.

The next day, Salieri lies to the Emperor that Mozart had been molesting women during music lessons in order to keep him from letting Mozart teach his niece, as well as ruining his chance for future pupils. Mozart is unaware that Salieri is telling these lies and discusses with Salieri the possibility of having pupils, given he's currently broke with no one who will hire him. Salieri recommends a man, whose daughter could take some music lessons. However, Mozart is not pleased with the meeting with the man and leaves.

Once Mozart takes his father and wife to a masquerade ball, Salieri (disguised as a guest) asks him to play one of his compositions on the piano; Mozart responds by playing a parody of his work and making fun of it. Salieri sees this as God at him laughing through Mozart.

After Mozart's father dies, Salieri begins planning to kill Mozart after he has taken credit for his work. He disguises himself as a stranger in a mask and costume similar to one he saw his father wear at the party, and asks Mozart to write a Requiem, giving him a downpayment and the promise of an enormous sum upon completion. His plan is to use the Requiem during Mozart's funeral after he has killed him and pass it off as his own. Salieri hires a servant girl to spy on Mozart for his work, one of which (The Marriage of Figaro) he knows will be disapproved by the Emperor and exposes it to him.

Due to the stress put upon Mozart from both Salieri and his father's death, he begins drinking heavily and both his health and his relationship with Constanze is beginning to tarnish-to the point where she takes their son and leaves him to go to the spa. Mozart later passes out during a performance of The Magic Flute and Salieri brings him home. When the actors for Mozart's play show up at the door to check on him, Mozart thinks it's the man whom Salieri disguises himself as, and sends him down to talk to him. Salieri manages to brush the actors off, and takes Mozart's share of money they give him. Once they leave he tells Mozart the money was from the man and that he wants him to have the Requiem done by the next night. Salieri offers to write it down while Mozart describes it to him. They spend the whole night together working on it. When Constanze returns in the morning, she tells Salieri to leave, but he refuses. She locks the manuscript away before they can finish it and once again tells Salieri to leave. He tells her he will not do so unless Mozart tells him to leave himself. She tries to get Mozart to do so, only to discover that he has died-thus Salieri's plan to take credit for the Requiem is ruined.

32 years later, Salieri grows tired of watching his music become less popular and Mozart's becoming more famous. He later blames himself for Mozart's death due to having put him in poverty, begs him for forgiveness in prayer and confesses to having killed him loudly enough for others to hear. He tries kill himself by slitting his throat, but is saved by his servants. He's taken to an insane asylum, where he confesses to a young priest and tells him of his life story. Salieri concludes that God killed Mozart and kept him alive to torture, not allowing him to share in even the smallest part of Mozart's glory. He then absolves the priest of his own mediocrity, considering himself the "champion" and "patron saint" for all mediocrities. As he's being taken away in his wheelchair, he absolves all the other patients of their mediocrity-while remembering Mozart's infamous laugh.

Salieri was a respectful, polite, very religious and friendly person, at the same time he is sometimes uppity and conceited. He was very envious of Mozart, yet he alone saw the real talent in his rival, honoring and hating him at the same time. But later, Salieri felt more and more anger, contempt, and hatred for Mozart and God and did everything he could to prevent his rival's success, but his respect for his works remained. He manipulated and lied to him but he respected the music and his talent sincerely. After Mozart died, Salieri was completely shattered, blamed himself for his death, and deeply regretted his actions. However, there are things he did not regret, such as the desired death of his own father. In addition to this, his mind was partly broken, as he considered himself the champion and patron saint of all mediocrities.

Young Salieri praying to God that he will fullfill his dream in becoming a composer. 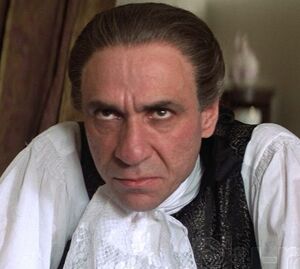 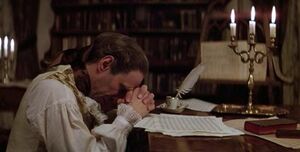 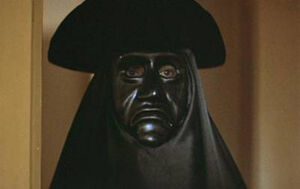 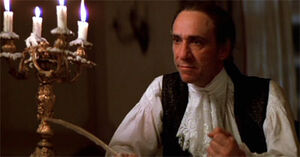 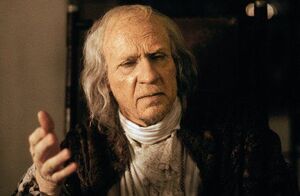 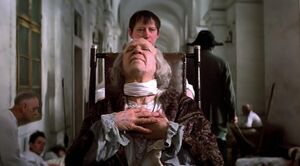 Salieri "absolves" the other patients of their "mediocrity".