Leader of the Makuta Strike Force

Assist Makuta Teridax in his quest of overthrowing the Great Spirit and take over the Matoran Universe. (failed)

Invade Karda Nui and turned the Av-Matoran into the Shadow Matoran. (partially succeeded, then failed)
Destroy the Toa Nuva. (failed)

Antroz is a major antagonist in the BIONICLE series. He also serves as the primary antagonist in the Karda Nui arc. Antroz was a Makuta who served as the high-ranking member of the Brotherhood of Makuta as well as the leader of the Makuta Strike Force as he and other five Makuta were assigned to invade Karda Nui in the preparation of the completion of the Plan.

He was also formerly the pilot of Jetrax T6, one of the vehicles that he stole before it was retrieved back by the Toa Nuva.

He was voiced by Scott McNeil, who voiced as Kalmah in the previous story in the animated show.

Approximately one-hundred and thousand years ago, Antroz and the other Makuta were created by the Great Beings, using the substance known as the Antidermis. When the Brotherhood of Makuta came into being, he eventually became a member of the organization as the high-ranking commander of the army.

A few years later; when the League of the Six Kingdoms led by Pridak attempt to overthrow Mata Nui, Antroz was assigned by Makuta Miserix to assist Makuta Teridax and their army to stop the rebellion. While Teridax and the others went to Metru Nui to attack Pridak and his allies, Antroz, Vamprah, Gorast and Bitil went to launch an ambush on the Barraki fortress. During the ambush, Antroz and Gorast successfully overpowered Kalmah while Vamprah and Bitil defeated Ehlek with ease.

Later after quite sometimes, Miserix assigned Antroz to supervise the island of Xia, which he later supervised its population and their activities.

When Teridax demanded a Convocation to reveal his plan of overthrowing the Great Spirit and claim leadership, Antroz was one of the Makuta to eventually sided with him.

Later, Antroz and the other Makuta evolved into the Antidermis.

During the Brotherhood of Makuta-Dark Hunters War, Antroz stole the Destral Cycle from the Dark Hunters members and took the liking to it.

Antroz and the other Makuta later listened to Gorast who explained to them that Teridax have ordered them to invade Karda Nui and transform the Av-Matoran into the Shadow Matoran in order to prevent more creation of the Toa of Light. Antroz became the team leader after he, Vamprah, Chirox, Krika, Gorast and Bitil were chosen to invade Karda Nui. He then tried to persuade Icarax into joining them in their quest. However, Icarax refused and Antroz gave up

When the Toa Nuva and their allies stormed into Destral, Antroz was ordered by Icarax to stop them from reaching to the Codrex. He then got into the Jetrax T6 and engaged Pohatu in Rockoh T3 and Lewa in Axalara T9 in the ariel combat. The three vehicles clashed as

Antroz later regained his consciousness and witnessed the Energy Storms began to wreck Destral following Ignika's sacrifice. Realising that Teridax had betrayed him and the rest of the Brotherhood, he desperately have Mutran to get him out of the island but Mutran refused to do so due to him obsessed with the storm. Helpless and trapped, Antroz was eventually destroyed by the storm along with the remaining Brotherhood.

Antroz was a skilled, tactical, and persuasive commander as well as an accomplished warrior. He is also aggressive as he prefers to conquer his opponents with sheer strength. However unlike some Makuta, he does not underestimate his foes. He also had a rare sense of honor, opposing cheating and deceit and wishing to win a fight fairly.

Antroz was one of the Brotherhood's most powerful combatants who was combined with both his strength and intelligence. As Teridax's primary lieutenant, he was capable of leading the army as well as his team to fulfil his objective.

His personal weapons are the two pairs of bladed claws which can be used for battling with his enemies and even scaling across the surface. His personal Kanohi, the Kanohi Jutlin enables him to cause any inanimate objects and obstacles 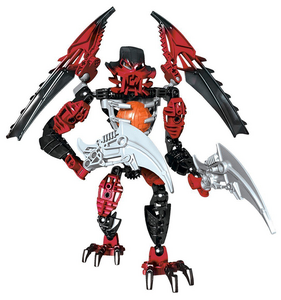 Antroz in his set form. 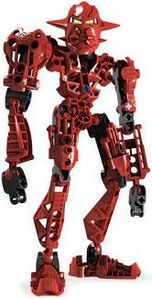 Antroz in his Jetrax T6 form. 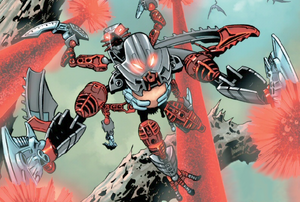 Antroz and Radiak as seen in the comics. 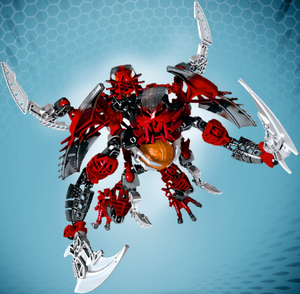 Antroz and Radiak in their set forms. 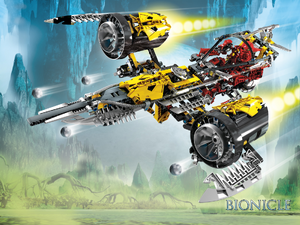 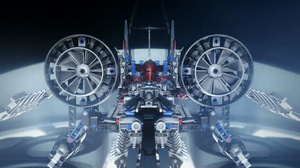 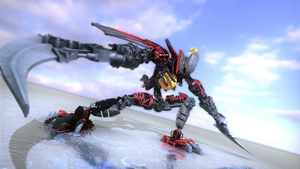