Anubis is a stand in the form of a sword who works for Dio Brando in the third arc of JoJo's Bizarre Adventure. He represents one of the nine Egyptian gods of prosperity. This Stand is unique for being the oldest known Stand and a stand who doesn't have a permanent user.

In Japanese, he was voiced by Takashi Nagasako in JoJo's Bizarre Adventure: Heritage for the Future and Yasunori Matsumoto in the anime. He was voiced by the late Brad Venable for the latter's dub.

Anubis was the stand of a blacksmith named Caravan Serai who died five centuries ago. Since his master died, he was confined in a museum in Cairo, until Dio Brando stole him and offered him to work for him. Anubis, realizing that he cannot overcome the sheer power of The World, accepted, and passed through many hands until he possessed a man named Chaka, making him slay his entire family. Chaka takes the sword and proceeds to kill Jotaro's group. He meets with Jean Pierre Polnareff, challenging him openly to Polnareff's surprise. He viciously attacks Polnareff, who is obligated to use a secret technique to kill Chaka, taking the sword with him. He and Jotaro goes to a barber, where he asks the barber to put the sword somewhere. Anubis then possesses the barber, continuing his attack against Polnareff. He tries to use his secret technique again, but since Anubis memorized the move, it fails.

Jotaro then interferes in the fight, becoming the new target of Anubis. Jotaro manages to parry the sword by holding the blade between the palms of his hands, then breaking the sword in half. Polnareff then sheathe the sword, but as a policeman tries to take the sword from him, he accidentally unsheathes it, becoming possessed. Jotaro then have a much harder fight against Anubis, who memorized his attacks and now control Polnareff's stand, Silver Chariot, who is also a stand of sword. Jotaro is viciously slashed, but as he cut Jotaro and put the sword deep in his flesh, Jotaro starts punching the sword, shattering it completely.

But it was not over, as the other half possesses a kid who was passing by. As he tries to attack Jotaro again, he accidentally trip on Iggy, their dog, then fly all the way to the Nile river, which ends in a comic scene where Anubis desperately tries to not fall into the river. This is where Anubis' tale ends, alone and condemned to rust in the bottom of the river.

Since Anubis is a stand without a master, he can possess anyone who unsheathe him. He can pass through anything in order to cut only his target, but his main power is to memorize his opponent's moves, so he cannot be beaten by the same pattern twice.

Anubis with his fellow Glory Gods. 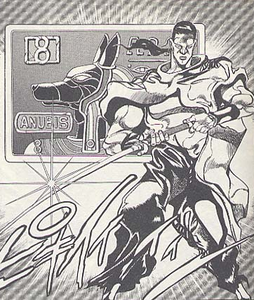 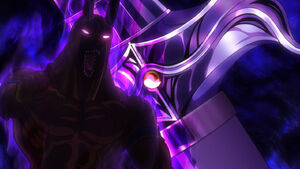 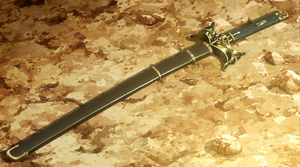 The sword Anubis is bound to.

A example of Anbuis' ability to ignore slashing through some things to reach its target. 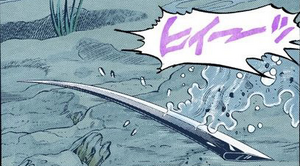