Egyptian Lord of the Dead

Yu-Gi-Oh!: The Pyramid of Light

Anubis is the main antagonist in the 2004 movie Yu-Gi-Oh!: The Pyramid of Light. He is an ancient and powerful Egyptian sorcerer who sought to destroy the world, but was thwarted by Yami Yugi.

He was voiced by Scottie Ray, who also voiced the Utrom Shredder, the Tengu Shredder and the Cyber Shredder in the 2003 Teenage Mutant Ninja Turtles series. He is also named after the Death God in Egyptian Mythology.

When Yugi had a vision after being driven unconscious by a strange force when looking at the pyramid, he saw Kaiba being grabbed by Anubis who had a black jackal-like head with a white muzzle instead of his human head and his was not pulsating, possibly being Anubis' complete form, if he had successfully drained all of the energy from Yami Yugi and Kaiba.

When he reveals himself in his incomplete form to Yami Yugi. Anubis was shown as a tanned and muscular but pulsating man with dirty blonde hair, red eyes, and a jewel embedded in his forehead. His clothing consisted of a black cape attached to spiked padding which were held by strings, along with gray shoulder pads, black pants, and the Pyramid of Light hanging around his neck.

After losing the duel to Yugi, Anubis used the power of the center jewel of the Pyramid of Light to assume a monster form that started off as slime until forming an armored jackal-like monster that could stand on his hind legs, possessed bladed wings, and an axe-like blade on top of his head, and the Pyramid's jewel in the center of his chest.

Anubis' powers are connected to the Pyramid of Light. With the item, he is able to have his spirit go wherever needed, transport his mummified body and the pyramid into the Millennium Puzzle, command undead mummies, possess others, and show others the future. When the Pyramid of Light card is in play, Anubis is able to drain life energy from others who have taken damage during the duel in order to restore his body. He is also shown to be able to create cards of his own, creating the Pyramid of Light which he put in Pegasus' Deck, and his Sphinx monsters through a black slime that releases from his hands. Anubis's original form shows him with tan skin, a ragged black cape, and the Pyramid of Light. When in his monster form, Anubis is able to breathe a devastating black flame from his mouth and can easily resist other monsters' attacks. In his presence, Duelists can summon Duel Monster cards that have real powers, including their special effects, as Joey Wheeler was able to summon "Gilford the Lightning" and "Gearfried the Iron Knight" to battle Anubis, Maximillion Pegasus was able to summon "Toon Dark Magician Girl" and "Blue-Eyes Toon Dragon" to stop falling debris, while Yugi and Kaiba were able to summon the "Blue-Eyes Shining Dragon", whose special effect to destroy any monster brought his end once and for all.

5,000 years ago, Anubis tried to destroy the world, but was defeated by Pharaoh Atem using the Dagger of Fate. His body was then placed in a sarcophagus which was chained to wall in an underground chamber, with his prized possession, the Pyramid of Light, being hidden in a secret chamber behind it. Despite all of this, a prophecy foretold he would eventually return from the dead to finish what he started.

His resting place was then discovered by archeologists, around the same time Yugi finally completed the Millennium Puzzle When Yugi inserted the final piece, not only did Yami's spirit awaken, but also Anubis's spirit inside the Pyramid of Light, causing an earthquake and a storm which kills all the archeologists.

Yu-Gi-Oh!: The Movie: Pyramid of Light

Anubis's spirit placed the Pyramid of Light card in Maximillion Pegasus's deck, which, along with the Blue Eyes Shining Dragon, was taken by Kaiba when he beat Pegasus in a duel.

Kaiba dueled Yami Yugi, and played the Pyramid of Light card to destroy his Egyptian Gods. Playing this card empowered Anubis to suck Yugi, Joey, and Tristan's souls into the Millennium Puzzle, where they were attacked by mummies. When Yami or Kaiba lost life points in their duel, their life force was sucked out and given to Anubis, who gave Kaiba duel commands, but Kaiba resisted and tried to destroy the Pyramid of Light so he could beat Yami with his own Egyptian Gods, but was unsuccessful.

Anubis then appeared in physical form, restored to life, and knocked Kaiba out. Anubis continued the duel against Yami, but when Yugi blinded Anubis's eye inside the Millennium Puzzle by throwing the Dagger of Fate at it, the Pyramid of Light was weakened, enabling Yami to destroy the card. Anubis summoned an overpowered monster, but Yami revived the Egyptian Gods, who destroyed the monster, defeating Anubis. The actual Pyramid of Light was destroyed, and seemingly, so was Anubis. Yugi, Joey, and Tristan's souls were released.

However, the orb of the Pyramid of Light, containing Anubis's soul, survived, and Anubis transformed into a monster, telling Yugi it was time to die. With Yami at his side, Yugi summoned Blue Eyes Shining Dragon, given to him by Kaiba, which had the power to destroy any monster. Blue Eyes Shining Dragon used Shining Nova Attack to destroy Anubis once and for all, along with the orb of the Pyramid of Light. 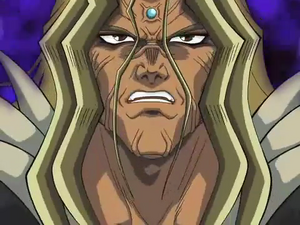 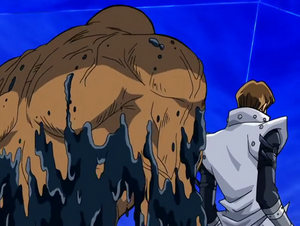 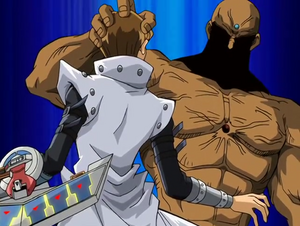 Retrieved from "https://villains.fandom.com/wiki/Anubis_(Yu-Gi-Oh!)?oldid=4022593"
Community content is available under CC-BY-SA unless otherwise noted.