Anvil is Cyclone Mini-Con in Transformers: Robots in Disguise. He and his partner Hammer, are a bit nasty. 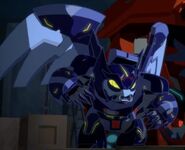 Bisk tells Anvil and Hammer to look for the cause of the sound.