Lord Ao (by veterans from the Fourth Great Shinobi War)

Ao (in Japanese: 青, Ao) was a supporting character in Naruto: Shippuden turned antagonist Boruto: Naruto Next Generations. A member of Kara, Ao was once a loyal ninja who serves the Hidden Mist Village and served the Fifth Mizukage. After suffering a devastating attack from the Ten-Tails in the Fourth Great Ninja War, Ao was treated and repaired for his severe injuries. However, he lost his touch with the ninja world. Ao betrayed the Hidden Mist Village and joined Kara.

Ao was a loyal mist ninja who was prideful of his country and protective of the Fifth Mizukage, Mei Terumī, as her bodyguard. Unlike Chojuro who was shy and weak-willed, Ao was outspoken and was not afraid to voice his thoughts on anything even if it might annoy the Mizukage. He was willing to cooperate and work with the other villages in the Fourth Great Ninja War.

However, after suffering from the powerful Tailed Beast Ball attack from the Ten-Tails and his subsequent treatment, Ao lost touch with the ninja world and grew apathetic over it. He betrayed the Mist village to join the mysterious terrorist group Kara. After getting mechanically modified, Ao felt arrogant and powerful. In his battle against the Boruto, Ao was confident while fighting him thinking that he would not lose to him. At the same time, Ao was manipulative by how he manipulated Katasuke into making technology and ruthless as he was willing to kill Konohamaru and his companions when they were closing in on him. Despite his ruthlessness and arrogance, Ao was nevertheless humble in acknowledging the superior power of the Inners, openly stating how Koji Kashin shouldn't rely on someone like him and questioning if he would be fine with him having to go all out and cause great damage. Ao also still had fractions of his old Shinobi honor, as he accepted his defeat to Boruto with dignity and though ridiculing Boruto's mercy, Boruto's words of his potential to do good things with the proper tools seemed to have restored what remained of Ao's loyalty to the shinobi world, as he sacrificed himself to save Boruto from Koji Kashin's summoning technique.

In the past, Ao acquired the Byakugan in battle from a member of the Hyuga clan and implanted the eye in his eye socket. He later worked his way to become a jonin ninja in his village and to supervise and guard the Mizukage.

Ao left with Chojuro and the Mizukage to attend the Five Kage Summit. When they got to the summit, Ao noticed something strange going on with Mifune, the leader of the Iron Nation who is in charge of the summit. He noticed the change in Mifune's chakra and that the Mifune was too in favor of Danzō Shimura, the Sixth Hokage candidate. Sasuke Uchiha and Taka invaded the summit and the Kage went to deal with him. Sasuke was rescued by Tobi and Tobi declared war on the kage before leaving. When Ao and his group were returning to the village, he encounter one of Danzō's men, Fū and was nearly killed by his soul-switching technique. Ao was later seen preparing for the war and was at the headquarters in the Lightning Village to watch over the battlefields. On the second night of the war, the Ten-Tails appeared and fired a Tailed Beast ball at the headquarters killing everyone there except for Ao. After the war ended, Ao was treated and repaired for his injuries.

At some point, Ao joined Kara and was mechanically modified with new ninja technology. Ao became an outer member of Kara. Ao also found Katasuke and used a genjutsu to manipulate Katasuke into providing information to Kara. Ao met Boruto, Mitsuki, and Sarada on the train with Katasuke on the way to Katasuke's laboratory and had a pleasant conversation with him. He told him about himself and lectured Boruto about technology. Koji Kashin told Ao that the vessel was missing.

Later on, Ao encountered Boruto and his team when they were on his tracks and were onto the crashed blimp that contained the vessel for Kara and vowed to kill them. He cornered them in a cave and was held back from Mugino who used a suicidal technique to collapse the cave on Ao. Ao was unaffected by the technique and the the group he was after escaped. Ao lost them but had a conversation with Koji Kashin who reminded him of the poor job he was doing. Ao found the team and fought the group by himself with his ninja technology until he fought Boruto. In his battle against Boruto, he was confident against him and continued to use his ninja technology against him but the latter manage outsmart him and defeat him with a rasengan. Laying in defeat, Ao wonder why the young ninja does not finish him off but Boruto told him he was once a good person and that he could redeem himself. Ao thought about Boruto's words and at the last second, he saved Boruto from Koji's giant frog summoning jutsu at the cost of his life. 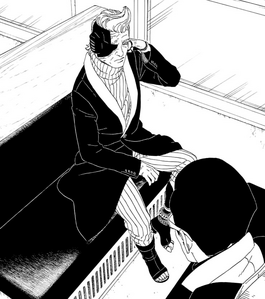 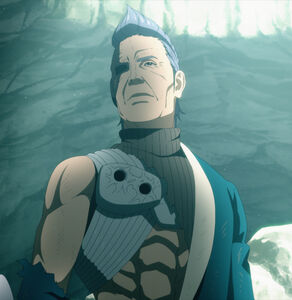