Dragon King of the Eastern Seas

Lord of the Eastern Seas

Control over the weather

Ao Kuang is a playable character in the MOBA game Smite. He is a character from the Chinese Pantheon, originated from the mythology, being one of the four Dragon Gods of the Seas.

As one of the four Dragon-Gods, Ao Kuang demanded to be worshiped from people at the shorelines for calm tides, rain for their crops, and to not cause rivers to flood. Originally, Ao Kuang was more greedy and expected large amounts of child sacrifices, causing flooding, large waves, and storms if he did not get said items. This caused people to be terrified of him, and not report said greed to the Jade Emperor. But one day, Sun Wukong visited his palace to get a weapon for his journey to the west. Although Ao Kuang offered other weapons, Wukong only wanted the Ruyi Jingu Bang, an large staff that helped control tides. Despite assumptions that no-one can lift it, Sun Wukong lifted the weapon easily, and also demanded armor, shoes, and a helmet, which the humiliated god also have to give.

Sometime after this, the demigod Neh-Za accidently shook Ao Kuang’s palace while playing in a stream, causing the peeved god to tell his favorite scout to find and kill the child. However, Neh-Za managed to both save himself and kill the scout, causing the infuriated Ao Kuang to order his third son to destroy him, who Neh-Za also slain. A now enraged Ao Kuang stomped off to Neh-Za’s father and threatened to take the issue directly to the Jade Emperor, but Neh-Za simply tackled the god and demanded him to bow down to him. These two actions both made the god humble and made the god determined to make himself look menacing, and strike fear into people again. 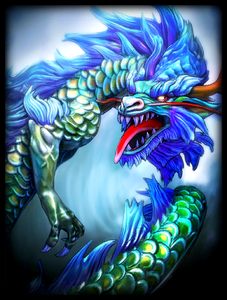 Ao Kuang's former appearence in the game, before the rework 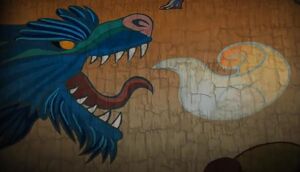 Ao Kuang's old version as he appeared in Ne-Zha's lore. 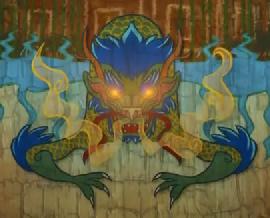 Ao Kuang's old version as he appeared in Sun Wukong's lore.
Add a photo to this gallery 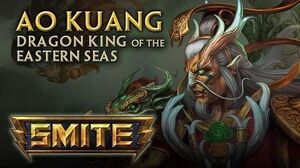 Retrieved from "https://villains.fandom.com/wiki/Ao_Kuang_(Smite)?oldid=3264007"
Community content is available under CC-BY-SA unless otherwise noted.