The Oni
The Blue Demon
The Blue Ogre
The Blue Troll

Leaving clues and items for its victims.

Killing its victims and turning them into Onis.

Kill as many victims as it can.

Kill the teenagers (succeeded with Mika, Takeshi, and Takuro; failed with Hiroshi).

The Ao Oni is the titular main antagonist of the Ao Oni franchise. It is a creature who lives in the abandoned mansion on the outskirts of town. Not much is known about the Oni, but it comes from a world with many creatures that resemble it.

The Oni is an enigmatic creature that lives in the abandoned mansion on the outskirts of a town in Japan. Not much is known about the Oni, but it lives with many creatures that resemble it. It is known to feed upon people. In Version 6.23, it has been shown that after the Oni kills, the victim becomes an Oni themselves. It seems to act like a virus, when the "virus" interacts with a sentient creature, within moments it can turn them into a horrific monstrosity, as exampled with a pregnant cat in the original game.

The third sequel takes place on a field trip towards a island, but the ship the characters from the original game were on got wrecked, they find themselves stranded on the island, they find out that Ao Oni is on the island.

Ao Oni appears once again in Ao Oni Online, in this game there are 100 players that must survive the Onis and also must not get killed by the purple fog.

Ao Oni appears as the main antagonist in the Ao Oni novel series, where Shun is a dejected transfer student who could not fit in with the rest of his class. When the rumors started to go around of a monster had appeared in a western-styled jailhouse, he encountered Hiroshi and his friends, and they set foot inside the mansion. Later on into the series, Hiroshi is the main protagonist and must save Takuro and the others with Shun and Anna's help.

Instead of being scary, the anime adaptation takes a more comedic route, involving Hiroshi and his friends getting into comedic situations with Ao Oni, which ends up with it crushing them with it's fist.

The Oni is a lavender humanoid creature with a large distorted head that vaguely resembles a human. It sports large, glassy eyes, a bent nose, and a tiny, featureless body. It always has the same bemused expression on his face. The back of its head is black suggesting that it either has black hair or rather just the dim lighting.

In version 5.2, the Oni takes a more threatening appearance in Takeshi's nightmare, should the player get the best ending. In the nightmare, the Oni's eyes are more similar in appearance and is baring its teeth. With its mouth open, the player can see that the Oni has sharp teeth as well as tusks.

In the live-action movie adaptation, however, there are some noticeable changes in the Oni's appearance. While its head remains large and distorted, its face is less distorted with green eyes with crude slits, and having a feral expression instead of remaining bemused over the course of the movie. The Oni in the movie has sharp teeth like in version 5.2 but lacks tusks and smaller but more numerous. Oni's right hand is larger in the movie, and the Oni is indeed bald. Its skin is also crude in appearance.

The Oni was shown to remain emotionless in spite of followed by murderous instinct to kill anyone who entered its mansion. It's also shown to have considerable intelligence, as it is able to hide within closets, fireplaces, in the dark, ambush its prey out of unexpected places, etc.

In the movie, it was given more personality while retaining its intelligence and murderous instinct. Here, it displayed sadistic, ferocious, and aggressive tendencies, as it enjoys moments of its victim's fear as it attacks and intimidates its prey by mimicking their friends' voices.

It is known to feed people and transform. Specifically, in versions 6.22 and 6.23, it has been shown that after the Oni kills, the victim becomes an Oni themselves, turning against the main protagonist, in this case, Hiroshi. These transformed Onis also seem to be able to take the form of the original character. This is shown when "Takuro" asked Hiroshi if he could go with him when Hiroshi goes to put the blue piece on the paper, Takuro turns into an Oni and chases Hiroshi. In their true forms, Oni retains the hairstyle of their former disguise.

In the movie, the Oni's ability to turn its victims into Onis was replaced with the ability to mimic their prey's voice and even is able to speak Japanese fluently. This likely because the Oni in the movie feasts upon the victims' body outright and often, if not always, only left their mutilated corpses.

In the Ao Oni game, there is a room named Oni Room. Once you enter it, you'll find different types of Onis: 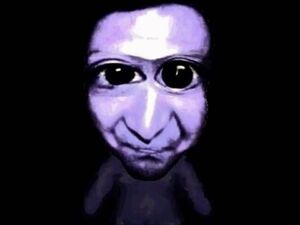 Ao Oni in the game. 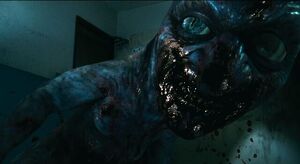 Ao Oni in the movie. 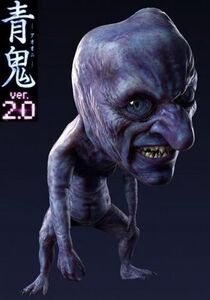 Ao Oni in the movie sequel. 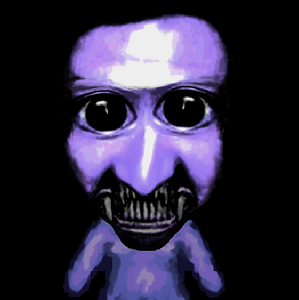 Ao Oni with its teeth bared. 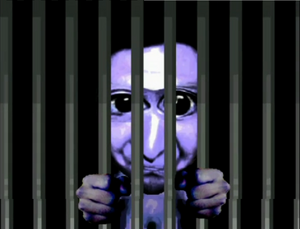 Ao Oni outside of the jail cell. 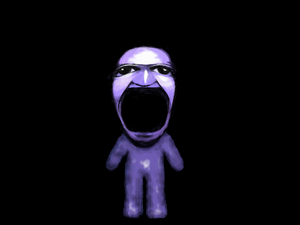 Ao Oni with its mouth open. 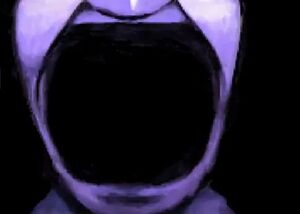 A close up of Ao Oni's mouth. 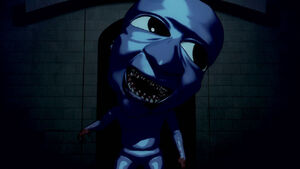 Ao Oni in the animated movie. 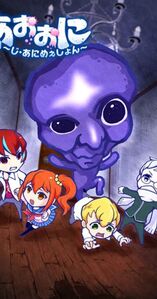