Aoba is a member of the Hokuto Three Crows who transforms into the Stag Hard Smash and a supporting antagonist in Kamen Rider Build.

He was portrayed by Tateto Serizawa.

Syuuya Aikawa was originally a worker at Kazumi Sawatari's farm along with Masaru Ooyama and Syoukichi Mihara. When the Skywall Disaster made Kazumi's land infertile, Kazumi used his savings to continue providing for the three and their families. Eventually, after the Hokuto government made a pact with Faust, Kazumi volunteered himself for the Faust organization's experiments so he could continue to support his workers, becoming Kamen Rider Grease and a soldier of the Hokuto government.

Out of loyalty, Syuuya, Masaru and Syoukichi joined the Hokuto military as well and volunteered themselves to be converted into Hard Smash to aid Sawatari as the Hokuto Three Crows. Becoming the Stag Hard Smash, Syuuya was code-named "Aoba".

After Prime Minister Yoshiko Tajimi declared war on Touto, Aoba and the other Crows were sent in to spearhead the invasion alongside Kazumi Sawatari/Kamen Rider Grease.

During a fight between Aoba and Kiba, Sento and Ryuga, Sento managed to access his Build RabbitTank Hazard Form and, succumbing to the Hazard Trigger's side effects, Build went into a brutal rampage that claimed the life of Aoba. After knocking Sento out of his transformation, Kazumi went over to a dying Aoba, who handed Kazumi his dog tag before dying and disintegrating into blue smoke.

A clone of Aoba along with clones of the other Hokuto Three Crows were later created by Evolt from his DNA and sent after the four Kamen Riders as they stormed the Pandora Tower. Grease opted to stay behind to fight them, telling his fellow Riders to go on ahead without him. After transforming into Grease Blizzard, Kazumi managed to defeat and destroy all three clones though he died soon after as a side affect of transforming with Blizzard Knuckle.

In the new world created by merging the World of Build into the main Kamen Rider world, Syuuya as well as Masaru and Syoukichi was still a worker at Kazumi's farm. He was seen eating at the nascita cafe with Kazumi and his coworkers and had to catch his boss when he fainted after falling in love with Misora at first sight. 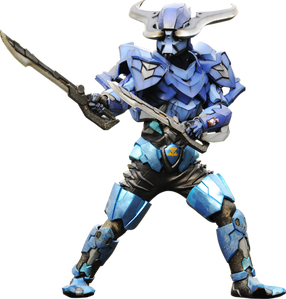 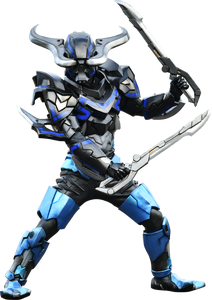 Stag Hazard Smash
Add a photo to this gallery 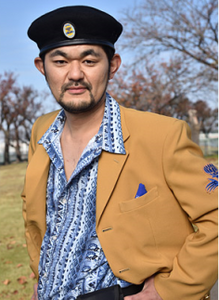 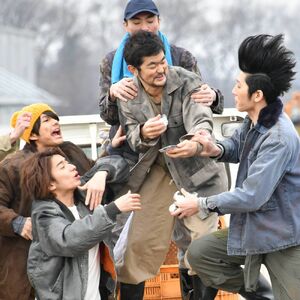 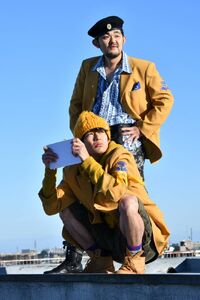 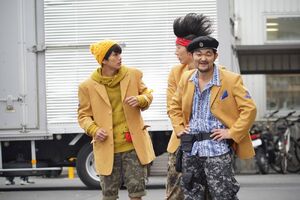 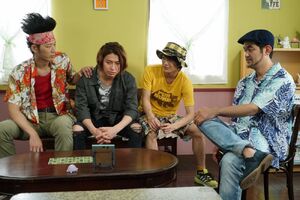 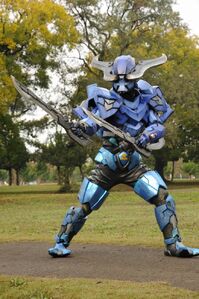 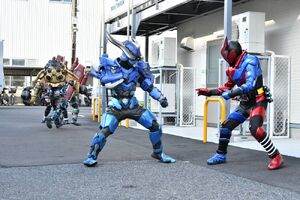 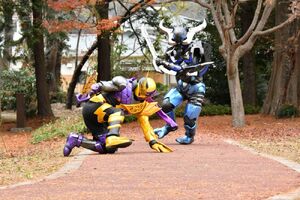 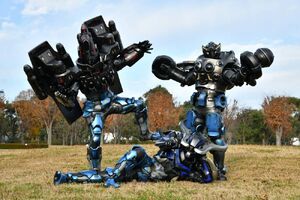 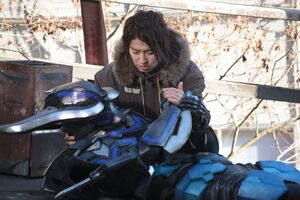 Retrieved from "https://villains.fandom.com/wiki/Aoba?oldid=4161323"
Community content is available under CC-BY-SA unless otherwise noted.