Aoki (Japanese: 青木), aka the Ox Orphnoch is an Orphnoch bounty hunter employed by Smart Brain alongside his partners Akai and Midorikawa to recover the Faiz Gear from Mari Sonoda and an antagonist in episode 3 of Kamen Rider 555.

He was portrayed by Hirohito Tanaka.

Aoki was one of the three bounty hunters employed by Smart Brain to recover the Faiz Gear from Mari Sonoda, the other two being his partners Akai and Midorikawa.

Stealing a motorcycle, Aoki went after Mari but wound up having to face off against Takumi Inui aka Kamen Rider Faiz. He was destroyed by Faiz's Grand Impact.

The Ox Orphnoch appears as a member of Dai-Shocker sent to the World of Black RX. He was destroyed by Diend's Dimension Shoot alongside the Worm Orphnoch and Frilled Lizard Orphnoch. 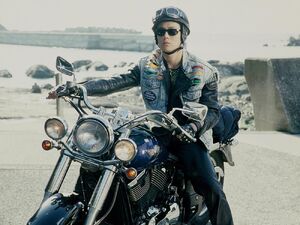 Aoki on his motorcycle.
Add a photo to this gallery

Retrieved from "https://villains.fandom.com/wiki/Aoki?oldid=4030942"
Community content is available under CC-BY-SA unless otherwise noted.