Villains Wiki
Register
Don't have an account?
Sign In
Advertisement
in: One Piece Villains, Anti-Villain, Manga Villains,
and 31 more

Marine Vice Admiral (both formerly)
Associate of the Blackbeard Pirates

Kuzan, known by his former alias Aokiji (Blue Pheasant), is a character in One Piece. He serves as the overarching antagonist of the Water 7 Saga, and as a major antagonist in the Long Ring Long Island Arc and the Marineford Arc.

He is a former Admiral and once a part of the World Government, but he was lazy. After the Paramount War, he was nominated for the position of Fleet Admiral, but lost it in combat against Akainu. After Akainu was appointed, Aokiji resigned from his position, refusing to serve under Akainu due to his cruelty and fascism. Following his resignation, he became part of the Blackbeard Pirates with intentions unknown for the time being.

Even though Aokiji was an admiral in the navy, which was presented as one of the main antagonistic organizations of the series, he would use his powers and influence to help people rather than be the World Government's force of dominion disguised as justice, and was a strong believer in a Navy concept called, "merciful justice" (which some WG higher-ups called "lazy justice"), and even though he was going to kill one of the main antagonists, the reasons behind it were that he had the means to revive the legendary weapons of ages past which could destroy the world, and he thought that they were too dangerous even for the people who gave him his orders to possess.

Not much is known about Kuzan's past, but in the One Piece Film: Z (Non-canon) it was revealed that he, along with other high-ranking Marines, were trained by Admiral "Black-Fist" Zephyr in their early years as marines. It was also revealed that he looked up to Zephyr very much in his youth, and did things to emulate him like singing Zephyr's favorite song (which he actually hated) and drinking his favorite alcoholic beverage.

In his days as a Vice-admiral he had eaten a powerful Logia Devil Fruit that gave him mastery of Ice, he also befriended a giant vice-admiral named Jaguar D. Saul. But Saul was having doubts on the World Government's actions in the name of justice. When the Buster Call came to Ohara Island, Jaguar did everything he could to protect Nico Robin, who was the child of a friend of his (who happened to be a wanted criminal for studying the Void Century); but Kuzan froze him solid, killing him. Kuzan expressed remorse for his actions and froze a path out to sea for Robin and giving her a rowboat to escape with. Sometime along the line he was promoted to the position of Admiral.

One day, the Straw Hat pirates stopped on an island where Kuzan happened to be sleeping. But rather than fighting them immediately, he helped some people who were stranded on an island by freezing the ocean to create a path to another island. Kuzan revealed he knows Luffy's grandfather, which shocked the latter as he compares them before he warned the crew about Robin, who in order to survive due to her excessive bounty and falsified crime listing, betrayed every organization she belonged to. He then battled the Straw Hats and froze Robin, and was about to smash her when their Captain, Monkey D. Luffy, grabbed her and gave her to his crew, who then proceeded to revive her using hot water. Luffy fought as hard as he could with Kuzan but, ultimately, the battle was ended when Kuzan froze Luffy solid with a single touch. Rather than kill him, he allowed the crew to revive Luffy, because (after struggling to remember) they helped apprehend Crocodile (who was doing things beyond his influence as a Warlord) and had a good word put in from captain Smoker.

Later, after rescuing Robin from being sent to Impel Down, Kuzan had a conversation with Robin from behind a wall at the victory party, expressing confusion at why she didn't betray them like she had so many times before, she stated that she had found people that would care about her like Saul had said. Kuzan then left the island without fighting, or even confronting the Straw Hats.

Kuzan was present during Ace's execution at Marineford. When Captain Whitebeard used his Quake-Quake powers, he, along with Admirals Kizaru and Akainu, blocked his attack. When the tsunamis from Whitebeard's attack were about to crash on Marineford, Kuzan intercepted them, using his Devil Fruit powers to freeze the waves in place.

Kuzan was shocked at Luffy's ability to use Haoshoku Haki, he was seen sweating as he realized he underestimated the latter's potential. After Ace's escape, his Ice powers and Ace's Fire powers clashed and, surprisingly, resulted in a standstill. Later, in the aftermath of the Whitebeard War, Fleet Admiral Sengoku announced his retirement and nominated Kuzan as his replacement.

During the two years between the episodes, it was revealed that he had a duel with Admiral Akainu, who was also nominated for position by higher-ups in the World Government, to decide who would lead the Navy. The battle was so great that it completely changed the climate of the island it took place, creating a frozen tundra side and a burning volcanic side. After Kuzan lost, he resigned as admiral and went his own way while Akainu became the new Fleet Admiral. (in the non-canon movie it was shown that his body was heavily scarred and he replaced his severed leg with one made of ice from his powers.

After Doflamingo defeated the now-Vice Admiral Smoker and was about to kill him, Kuzan stepped in and stopped him from dealing the final blow. After exchanging words, Doflamingo left. It was implied by Kuzan that he now has connections with the Underworld, which explains how he knew about the gas bomb on Punk Hazard to come and save the marines.

He was mentioned by Jesus Burgess that he can't trust Aokiji while Blackbeard remarked on Shiliew being the same. This means that Aokiji has been in contact with the Blackbeard Pirates.

This was confirmed by the Gorosei that Aokiji has become affiliated with the Blackbeard Pirates, but to what extent is unknown.

In Doflamingo's fight, he almost kills Smoker but Aokiji came, he gave Doflamingo a warn but Doflamingo still attack, then Aokiji froze him. Because don't want to have trouble, Flamingo left Smoker to Aokiji.

Aokiji ate the Logia Ice-Ice Fruit which allows him to control, create and transform into ice at will. He uses this fruit to freeze several pirates solid in ice. He even froze his good friend, Jaguar D. Saul. 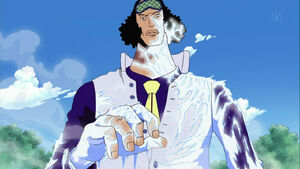 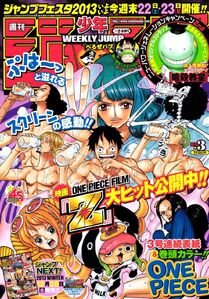