One of the four Hellspawn Lorxs

Rule the Earth alongside the four Hellspawn Lords.

Initially, Aomizuchi appears a mysterious ninja with white hair and white ninja armor, his face concealed by a white helmet with a visor of four red glowing eyes. His true form is a demonic jade-green dragon, though a partial form of his true self is revealed when he mutated the possessed Moritsune. On his neck is a vicious scar that glows crimson whenever Akujiki was near.

A loyal and devoted servant of Hiruko, Aomizuchi works in shadow to ensure his lord and master's will is done. After being summoned, he possessed the body of Moritsune, making it appear that the wicked mage was honoring his promise to Ageha, and in a single night, he viciously slaughtered the Oboro clan and placed Hiruko's spells on them, turning them into his subordinates. He is also sadistic, in that he taunted Hotsuma with Kobushi slowly dying at Kumano Shrine, implying it was he who killed him. Sometimes if the player loses he will laugh out maniacally.

Aomizuchi, the Green Dragon of Thunder, is one of the Four Pillars; powerful Hellspawn demons that serve and obey Hiruko Ubusuna. Together with Hiruko they were defeated and sealed by the Oboro clan's main household 72 years prior.

After 72 years, Hiruko was set free, and summoned Aomizuchi. Using his demonic might, he singlehandedly destroyed the city of Tokyo. From there, he took over the body of the deceased Moritsune, and under the guise of a dark shinobi clad in white armor, he slaughtered the Oboro village down to the last man, woman, and child. As Hiruko enslaved their soulless bodies and manipulated their Yin, the Oboro clan fell under Hiruko's absolute control, Aomizuchi reports their success in the destruction of the Oboro.

Under Hiruko's orders, he pursues Hotsuma, obstructing his path every chance he has and summons the reanimated Oboro ninjas to do his bidding and kill Hotsuma. Hotsuma meets Aomizuchi face to face, greatly worried that the Oboro's killer was in fact someone he knew long ago. Aomizuchi declares that once he kills Hotsuma, the Oboro bloodline is completely wiped out. To add insult to injury, he gloats about Kobushi slowly dying on the steps of Kumano Shrine. No sooner did he state this that Akujiki reacted, and the gruesome cut across his neck and collar bone shone a bright crimson. Stating his pain and suffering, Aomizuchi lunged at Hotsuma.

As Hotsuma and Aomizuchi battled for the first time, Aomizuchi deliberately allows Hotsuma to cut him and grabs Akujiki's blade, allowing his evil blood to wake the demon sword from its prolonged torpor. After this he would continue to relentlessly pursue Hotsuma. It is not until after they meet for the fourth time that Aomizuchi is revealed to be none other than Moritsune, or so Hotsuma initially thought.

It was when the sorcerer appeared at Kan'Ei Shrine that Aomizuchi's true colors are revealed. As Ageha goes to Hiruko to see if Moritsune is alive again, she sees her beloved, unaware that this was not the man she loved. She died at the hands of the cursed Moritsune whose body was then mutated and warped into the demonic possessor's true form. Aomizuchi covers for Hiruko's escape to the Golden Palace, and draws his evil powered blades against the enraged Hotsuma.

Despite using his powers and the strength and speed of Moritsune's body to kill him, Hotsuma won the fight. Impaling the demon with the Akujiki, Aomizuchi cries in pain as the demon blade slowly devours his vile essence whole, allowing Moritsune to reclaim his body.

As the Hellspawn Lord of the Heavens, Aomizuchi is an extremely powerful demon who commands lightning. Through the entirety of the game, Aomizuchi fights using Moritsune's corpse. It was with his evil power that he destroyed Tokyo, slaughtered the Oboro, and enslaved them to serve Hiruko.

In his first bout with Hotsuma, his attacks are simplistic in nature, attacking solely with a thrust attack that he winds up, surrounded by a blue cone of energy similar to Hotsuma's Special Attack. He occasionally counters with a two hit slash when successfully blocking attacks. If he falls off the arena, he simply warps back from the air, landing with a field of energy that paralyzes the player if approached.

Upon having his full power restored, Aomizuchi exhibits the full of extent of his abilities and Moritsune's. The shinobi's swords are now wreathed in a green ethereal flame to enhance their cutting power. His fighting style is identical to Hotsuma's, employing the use of the Stealth Dash, the Shuriken Burst, and his deadly Ninjutsu, Rairyu (朧流奥義「雷竜」Oboro Style Secret Technique "Thunder Dragon"), which is a green version of the Ka'en spell with devastating damage. His kunai in particular are slightly more powerful and explode when in near proximity of the player as well his own version of Hotsuma's charge attack, signaled by the image of a dragon before he strikes. To aid him, he is able to summon small dragon-like creatures called Mizuchi that will try to tackle the player if near. 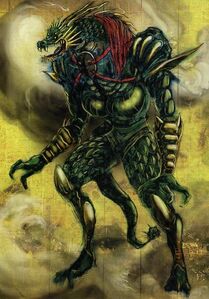 An artwork of the true form of the Hellspawn Lord Aomizuchi.
Add a photo to this gallery

Retrieved from "https://villains.fandom.com/wiki/Aomizuchi?oldid=3579754"
Community content is available under CC-BY-SA unless otherwise noted.