Build a tunnel to Downworld so the Akuma Clan can invade Japan.

Aonida is a member of the Akuma Clan and the main antagonist of episodes 3 and 4 of Akumaizer 3 alongside his brother Akanida.

He was voiced by the late Takashi Watabe, who also voiced Don Horror and God Neros in the Metal Hero franchise.

Aonida assisted his brother Akanida when he traveled to the surface to abduct human children to convert into combatants for the Akuma Clan. When the Akumaizer 3 soon arrived to stop him, Aonida arrived to provide backup and enabled his brother to escape. The two brothers later successfully kidnapped children and brought them to be converted into combatants, but the Akumaizer 3 showed up to stop them. After Gabra destroyed Akanida, the three Akumaizers performed their "Magic Circle" technique to fling Aonida into the water.

However, Aonida survived and was able to bring back his brother thanks to Akanida's special resurrection power. The two hatched a plan to kidnap Yuri, a construction contractor and architect, and to use her and her team to build a tunnel to the Downworld so the Akuma Clan could invade Japan from there. They also planned to drive apart the Akumaizer so they would be easier to defeat.

After Akanida was slain by Evil, Aonida used his brother's special resurrection power to bring him back, leading the Akumaizers to distrust Evil as he had said he had killed him and did not know about his power to revive. Aonida later attacked again to lure the Akumaizer away so Akanida could abduct Yuri. After Akanida captured Yuri and made it seem like Evil had let him get away, Evil left the Akumaizer out of shame and destroyed Akanida again, leading Aonida to have to revive him again. However, Xavitan and Gabra caught sight of Aonida reviving Akanida and boasting about their plan to divide the Akumaizer with him, the two Akumaizers realized the truth and rejoined with Evil to defeat the Oni brothers. Together, the three Akumaizers were able to destroy both of them. 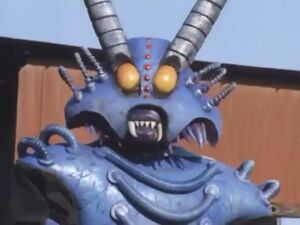