Make Travis a slave, have Lisbeth as their bride, and turn Arliss as one of their own (failed).

Renegade Kidnappers
The Apaches are the central antagonists of Disney's 1963 live action film Savage Sam, the sequel to Disney's 1957 live action film, Old Yeller. They are a manipulative tribe of unscrupulous Apaches who have in their number one slightly wiser Comanche.

While Arliss and Sam are tracking a bobcat, Travis is warned by Bud Searcy that renegade Apaches are in the area. When Travis joins Bud's 17-year-old daughter, Lisbeth, in a search for Arliss, all three are captured by a band of Apaches led by a Comanche chief.

The boys' Uncle Beck Coates witnesses the scene and manages to wound the Indian leader, but Beck's horse is shot by one of the braves, allowing the Comanche and his followers to escape with the captives. Beck alerts the U.S. Cavalry, but the Indians split into three groups and ride for the hills; in the confusion, Travis escapes but is knocked unconscious and left to die. Beck and his posse of five find Travis and his dog, set out in pursuit of the other captives, and eventually find the Indians in a valley fighting over Lisbeth.

Although posse member Pack Underwood, bent on revenge for the massacre of his family, fires a shot that alerts the Indians to their planned ambush, the youngsters are saved and the renegades captured. 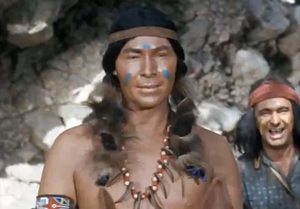 The Comanche Chief
Add a photo to this gallery 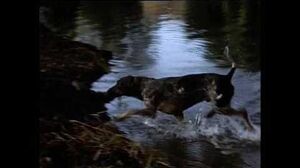 Retrieved from "https://villains.fandom.com/wiki/Apaches?oldid=3984337"
Community content is available under CC-BY-SA unless otherwise noted.