Evil space hag (by Fox during her Final Phase)

Leader and queen of the Aparoids

Collecting information from all the things she's absorbed

Crush the Cornerian military (both failed).

Assimilation of other species

The Aparoid Queen is the queen of the Aparoids, the main antagonist, and final boss of the video game Star Fox Assault.

The queen makes her nest at the core of the Aparoid homeworld. She continues to spawn Aparoids, and they continue to multiply as long as she exists. When there were enough Aparoids she attacked the Lylat System. One of the Aparoid moths shot down Andrew Oikonny, the last survivor of Andross's army, but could not defeat Star Fox. Fox, Falco, Krystal, and Slippy battled the Aparoids, who assimilated Fox's enemy Pigma Dengar. When Fox destroyed him he took a core memory that he stole, which revealed the location of the Aparoid Homeworld. Slippy's father Beltino created a self-destruct program that if used on the queen would destroy her and all of the Aparoids.

Before the creation of the self-destruct program, the Aparoids invaded Sauria, killing many dinosaurs including ThornTails and several other tribes, and invaded Corneria, destroying most of the Cornerian Fleet. They nearly assimilated General Pepper, forcing him to fight Fox, but he survived.

Star Fox and Star Wolf battled Aparoids all the way to the core of the homeworld, but Wolf's team were forced to distract extremely powerful Aparoid to give Fox a chance to get to the core and battle the queen. She imitated the voices of Pigma, Peppy, General Pepper, James McCloud, and R.O.B., but Fox and the team weren't fooled (remembering Wolf's advice "Don't hesitate. When the time comes, just act!") defeated her and Fox launched the self-destruct program into her, but she suppressed it and escaped to create an antibody. Fox, Falco, Slippy, and Krystal chased after her and defeated her, weakening her so that she could no longer suppress it and was destroyed, along with all the other Aparoids as well. With that, the Aparoids were exterminated and their terror across the universe was ended. 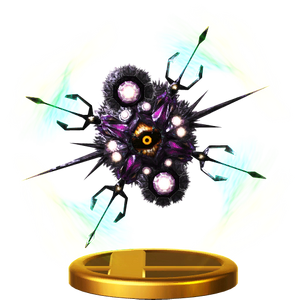 The Aparoid Queen's Trophy in Super Smash Bros. for Wii U.
Add a photo to this gallery

Retrieved from "https://villains.fandom.com/wiki/Aparoid_Queen?oldid=3434914"
Community content is available under CC-BY-SA unless otherwise noted.