The Apathy is a race of tall humanoid Creatures of Grimm from the American animated webseries RWBY.

Like other Grimm, the Apathy were created by the God of Darkness in an attempt to rid the world of life, and remained even after he and the God of Light abandoned Remnant.

Much later, a farmer named Bartaby helped found a small township in Northern Anima. The town did somewhat well until Grimm attacks, environmental hazards, and money problems began to take their toll. The townsfolk were often in a state of worry and dread, leading to panic and hardship. Bartaby, who wanted to fix the problems, knew that the only way he could help the town was if they all calmed down first. Knowing of the Apathy's ability brainwash people into a state of calm with their mere presence, Bartaby undertook a dangerous mission to find a pack of the Apathy and steal away two individuals. He then lured the two Grimm in the tunnels beneath the town, allowing everyone to calm down. However, Bartaby made the mistake of not boarding up the entrance immediately after the job was done, and the rest of the pack followed. By the time Bartaby boarded up the tunnels the next day, the entire pack was underneath the town. Because of this, everyone in the town was calmed and brainwashed into a state of severe apathy, where they lost the will to continue their daily lives and only felt tired. Eventually, they lost the will to even get out of their beds, soon giving up entirely and leaving themselves to wither and die in a mass death event that killed the entire town.

Years later, Team RWBY, Oscar Pine, Qrow Branwen, and Maria Calavera come across the town on their way to deliver the Relic of Knowledge to Atlas. They decide to rest there, but discover the corpses of the townsfolk filling the houses. They stay in the houses and feel extremely tired, though they chock it up to the fact that they have just been told Ozpin's dark past and that Salem cannot be stopped. As they stay in the town, the only feel more and more confused and tired, with Yang hallucinating Adam Taurus and the rest giving up hope on their mission.

The group sleep the night away, but Qrow resorts to drinking to deal with his strife. Even after waking, everyone is still tired and begin discussing the fruitlessness of their task and consider giving up. Yang, Blake, and Weiss suggest Ruby just throw the Relic into the town's well and be done with it, so that they would be able to abandon their mission and live their lives free of its burden. Ruby holds the Relic over the well, but does not want to abandon their quest. However, she is startled by a pair of red eyes staring at her from the darkness and drops the Relic. Though everyone else wants to leave, Ruby insists they go down and retrieve it.

Team RWBY descends the well into the town's underground, where Ruby finds the Relic. However, she comes face-to-face with the Apathy as Maria Calavera discovers what happened to the town. Team RWBY attempts to fight the Apathy off, but they release a shriek that makes the team feel weak and loose the strength to fight back. Team RWBY and Maria Calavera flee the Grimm, making their way to a wine cellar where the Apathy corner them. They then release another brainwashing shriek that makes the group fall, weak and tired. Ruby tries to get her team up, but Blake succumbs to the brainwashing and loses her will to run, simply giving up and acknowledging that the Grimm killing her is fine. As the Apathy prepare to kill Blake, Ruby sees her friend about to die and unleashes her silver eye power, destroying a large group of the Apathy and allowing everyone to temporarily come to their senses.

Maria and Weiss find a way to escape, but it is locked. Yang goes to punch it open, but the Apathy draws near again and shriek, collapsing all of Team RWBY, including Ruby, into a state of tiredness and carelessness. However, Maria recognizes Ruby's silver eye power and convinces her to feel what family and friends make her feel. Ruby gains the courage and will to fight back, and unleashes her eyes again, wiping out another wave of Grimm. Yang comes to long enough to punch the door down, and he group escapes. Weiss uses alcohol and fire Dust to burn the following Grimm and the house down, allowing the group enough time to grab Qrow and Oscar and flee the town.

As they escape, Maria reveals what she found about the town and why the Apathy were there. Everyone apologizes to Ruby for wanting to give up, but they do realize that they were partially under the Grimm's power.

The Apathy appear as units in RWBY: Amity Arena. They are slow-moving melee fighters that continuously spawn more units as long as one is left alive, pushing towards the enemy turrets. Enemy units in their vicinity are slowed.

The Apathy are not strong, fast, or especially fearsome. However, they do possess long claws that they can use to injure and kill their prey. They are also very durable and are able to take Dust ammunition without stopping. However, their most dangerous and prominent ability is the one that allows them to emanate a brainwashing aura with their mere presence. This aura causes those affected by it to become increasingly apathetic the longer they are exposed to it, losing their wills to fight, flee, worry, and eventually even move. The Apathy are also able to shriek, which concentrates or speeds up the effect of their power to cause sudden and immediate weakness, tiredness, and apathy. They use this when physically encountering prey and enemies to make it so that the targets cannot fight or run, and eventually lose the will to do either, making them vulnerable and not even concerned about their pending demise. 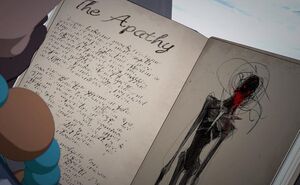 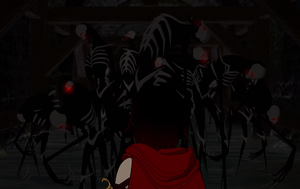 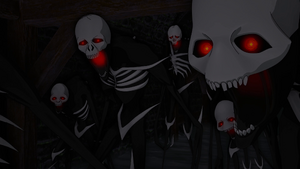 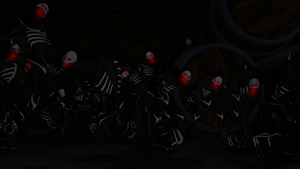 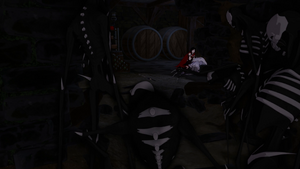 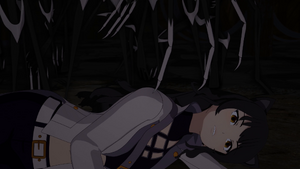 The Apathy attacking a hypnotized Blake. 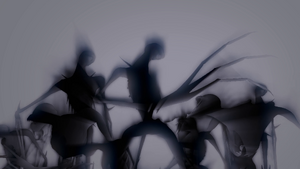 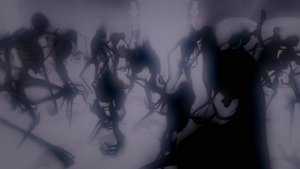 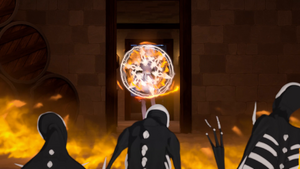 Weiss setting fire to the pack chasing her. 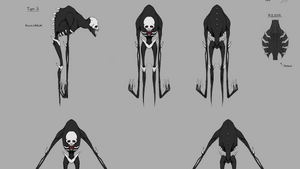 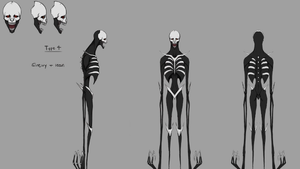 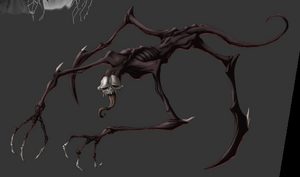 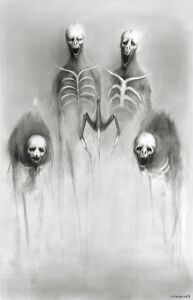 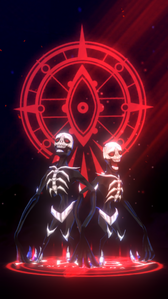