To destroy the universe and bring everything back to non-existence. (ongoing)

Apep (also known by his Greek name Apophis) was the evil god of darkness in Egyptian mythology and he was the archenemy of the Egyptian solar god Ra. He often appeared in the form of a giant, demonic snake, who each night attempted to devour the Sun after it left the sky, only to be repelled by the god Set (who ironically would take his place as the God of Evil of Egyptian Mythology as centuries went by). Other times, he would take the form of a giant sphere of malevolence. He was also considered the embodiment of chaos and sought to bring about the end of light and life within the mortal universe. He is said to live in the Egyptian underworld and despised by all of the deities in the mythology of which he originates. 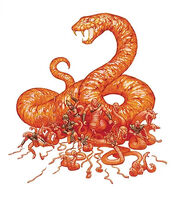 An artwork of the unholy Egyptian god Apep, with his own army of evil.
Add a photo to this gallery
Retrieved from "https://villains.fandom.com/wiki/Apep_(mythology)?oldid=2332052"
Community content is available under CC-BY-SA unless otherwise noted.