Ability to use the copied evil Digimon's attacks

Being the ultimate evil.

Destroy the Digidestined and their Digimon partners (failed).

Plunge both Earth and the Digital World into darkness (failed).

Apocalymon is the main antagonist as well as the final antagonist in Digimon Adventure. He was created by deceased Digimon during a reconfiguration and he was able to breach through the fire wall.

Apocalymon is a Mega Level Digimon that resembles very much often an unidentified mutant Digimon on a dodecahedron with pyramidal platforms and large claws connected to DNA strand-like arms. With those arms, he can easily reverse the Digivolution of a Digimon while holding onto it.

Apocalymon can force Digimon to De-Digivolve back to their Rookie forms, and use the copied attacks from the previous defeated evil Digimon. He can also make a victim disappear into nothingness. After being defeated, he can wipe out an entire dimension as a last resort.

Separated from the rest of the Digital World and forced to watch moments unfold, Apocalymon grew to despise the Digimon who were allowed to exist and intended to destroy the entire Digital World. As a result, Apocalymon began to influence events such as the reign of the Dark Masters and other evil Digimon that the DigiDestined defeated. Upon Piedmon's defeat, with the Digital World completely gone, Apocalymon reveals himself and he even self mutilated to show both his warped ideals and resolve. From there, using the attacks of many of DigiDestined's previous enemies, Apocalymon dedigivolves the Digimon and destroys the Crests before deleting the DigiDestined and their partners. However, still possessing the Crest power, the Digidestined return to existence with their Digimon as they manage to defeat Apocalymon, destroying all his claws and the humanoid part of him. However, Apocalymon uses his last resort attack Total Annihilation to destroy himself and everyone else. Luckily, the DigiDestined's refusal to give up enables their Digivices to create a barrier to contend the blast with only Apocalymon destroyed.

Apocolymon serves as the final boss of the PSP video game adaptation of Digimon Adventure. After the DigiDestined's battle with the rest of the Dark Masters, as well as MetalEtemon and VenomMyotismon, Apocalymon would then reveal himself.

In order to obtain Apocalymon, one must DNA digivolve Puppetmon and MetalSeadramon or Machinedramon and Piedmon, the component Digimon must have reached at least level 71 and possess 444444 Dark exp points. 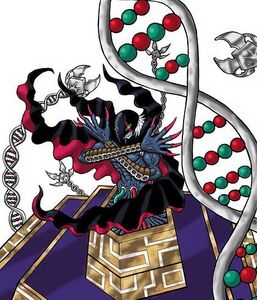 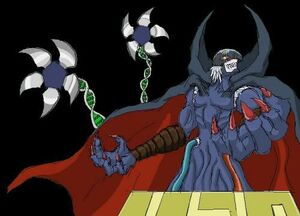 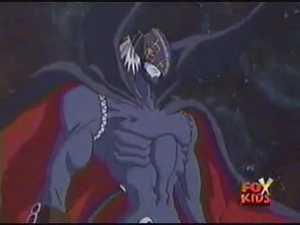