Making others fight to prove their loyalty or strength.

Destroy all the weak and the inferior.

Kill the X-Men and all the other mutants who oppose him.
Rule over the entire world and to enslave all he deems strong.
Bring about the Age of Apocalypse (all failed).

En Sabah Nur, better known as Apocalypse, is one of the main antagonists of Marvel Comics, most commonly serving as an enemy of the X-Men. He is one of the oldest mutants who has become one of the X-Men's greatest foes since his first arrival, championing an extreme philosophy of mutant supremacy and survival of the fittest; to Apocalypse, only the strong deserve to survive and anyone that shows weakness should be mercilessly destroyed.

His main goal throughout the majority of his career was to plunge the world into a terrible genetic war in which mutants would ultimately rule the world, upon which he would watch as the mutants battled each other until only the strongest, most aggressive individuals survived. He is the overarching antagonist of the X-Men comic book series. He is the arch-enemy of Cable, Angel and the second arch-enemy of the X-Men as a whole after Magneto.

Born in ancient Egypt (dating back to 3,000 B.C) the young Apocalypse was abandoned as an infant due to his gray skin and blue lips as well as unusual markings on his face. He was found and raised by desert nomads who would teach him the ways of "survival of the fittest". He was later named En Sabah Nur which means "The First One" in the Egyptian language.

As he grew older, he saw his tribe attacked by the forces of the pharaoh Rama-Tut and became vengeful, disguising himself as a slave in order to get close enough to the pharaoh to kill him, however when he gained the chance to attack the pharaoh, he found himself defeated due to futuristic weaponry, revealing that Rama-Tut was an alter-ego of the time-traveling villain Kang the Conqueror.

He survived the assault and tried to flee along with Nur, a woman he had fallen in love with, but she rejected him out of fear of his appearance. This was the last straw for Apocalypse and he went into a rage, unleashing his mutant abilities and forcing Rama-Tut to flee as he went on a rampage.

For centuries to come, Apocalypse would wander the world, making civilizations worship him as a god and manipulating them into fighting wars, testing their strength and justifying his actions by claiming he was improving the world with his actions.

Eventually the great warlord stumbled upon Celestial technology and used it to enhance himself further before he put himself in suspended animation, deciding to "sleep" until mutants such as himself were more numerous and he could put their strength to the test as he did so many ancient civilizations.

After the rather confusing "early years", Apocalypse would remain hidden, more or less, until the modern age, in which he would begin his lengthy career as the X-Men's most powerful and dangerous mutant enemy, creating countless plans on global conquest and war as well as regularly recruiting powerful beings to be his heralds, which he named the Horsemen of Apocalypse. Some of the mutants he recruited would be heroes either brainwashed or enslaved to his will while others were villains that followed him freely.

He also fought many complex battles involving time-travel, only serving to make his history that much harder to follow. However, in all incarnations he has had the same basic goal, to conquer the world and plunge it into war.

Apocalypse himself also starred in his own story arc, fittingly titled "Age of Apocalypse, which was an alternate timeline in which Professor Xavier had been murdered by Legion and Apocalypse succeeded in taking over most of the world and everyone would refer to him as "Lord Apocalypse" while beging subjugated to his dangerous ideology. This series showed Apocalypse at his most powerful and deadly, his world being amongst the darkest of the X-Men's numerous "alternate" worlds.

Ultimately the Age of Apocalypse would come to an end due to the actions of a time-traveling Bishop, who undid the events of the past and thus erased the alternate time-line.

Apocalypse is a very complex entity, usually seen as blasphemous and malevolent he is actually somewhat amoral and seeks to ensure that the "strong" survive and populate so as to create a society in which super-mutants such as himself would wage eternal war and thus ensure his own supremacy over the world (as he sees himself as the strongest of all mutants). He views humans as unworthy of existing but has offered them the "gift" of mutation (often with deadly side-effects) and is utterly devoted to engineering the war between man and mutant: this was seen after many mutants were de-powered by Scarlet Witch and Apocalypse manifested, threatening to wipe out half of humanity so as to ensure both sides had a "fitting chance" in his grand goal of amassing a following of the "strongest".

Also revealed in X-Men Legends II that due to his ego-maniacal form, Apocalypse formed and assembled the Madri Priests, a massive fanatical cult of mutant and human followers who worshiped him and taken his doctrine of the survival of the fittest as truth. He also assembled the Infinites, genetic clones with advanced cybernetic implants created by the mad Mister Sinister, to follow him into battle and to eliminate all weaker enemies to his reign.

He leads both the Madri Priests and the Infinites to spread the "divine truth" of the survival of the fittest and to crush all foes while in his unrelenting search of "The Four Who Are One" (Sabretooth, Quicksilver, Polaris and Emma Frost), 4 unique mutants with "Harmonic DNA" that will resonate and strengthen each other as they were musical notes giving harmonic sounds and pitches, and the complete creation of "The Nexus", a power-amplifier machine inscribed from hidden Nuwali hieroglyphs found in Apocalypse's Tomb within Giza in Egypt, all to fulfill a secret but dangerous prophecy: for the Earth to be conquered and enslaved by Apocalypse and all will be forever ruled one law, the survival of the fittest. In the end, Apocalypse is defeated by the alliance of both the X-Men and the Brotherhood of Evil Mutants and his plan failed.

He also made an cameo appearance at the end of X-Men: Days of Future Past film and appeared in X-Men: Apocalypse as the movie's titular main antagonist and he is born in 8000 B.C., estimating his age to 9983. Sometime in ancient Egypt, he is seen as a cloaked figure a desert dune with hundreds of primitive Egyptians (who later formed the Ashir En Sabah Nur cult under his command) bowing to him, chanting his name "En Sabah Nur" over and over again as they worship him. As they bowed and chant, the Pyramids of Giza was being assembled by Apocalypse telekinetically while a group of four riders were to his left. 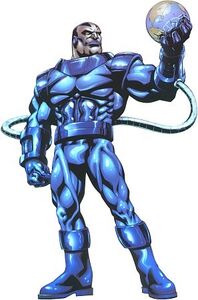 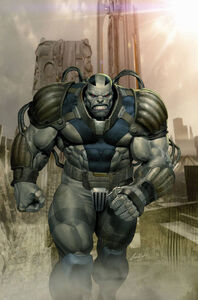 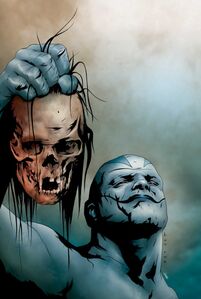 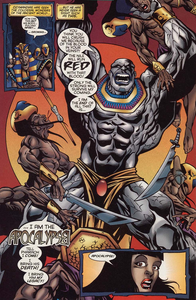 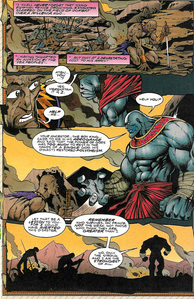 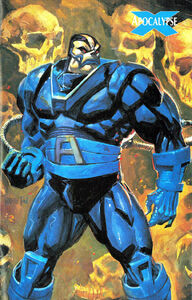 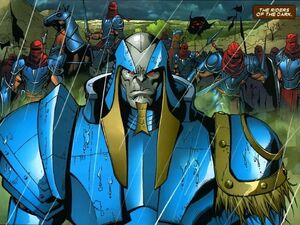 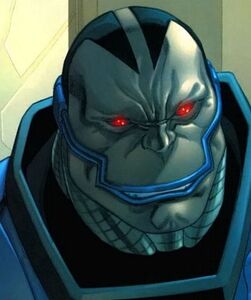 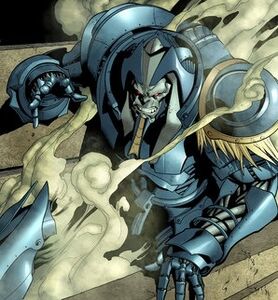 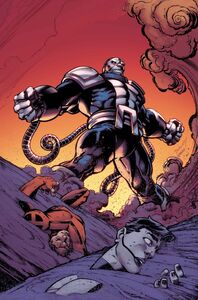 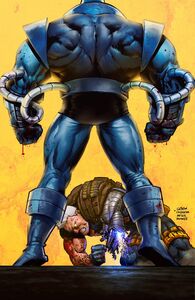 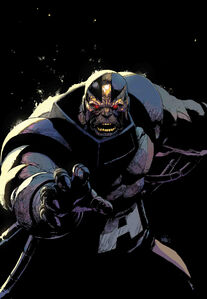 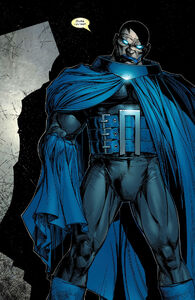 Apocalypse in the Marvel Ultimates comics. 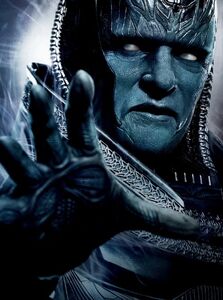 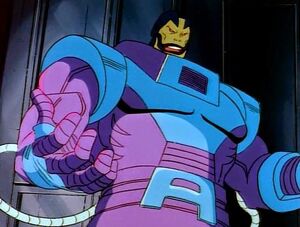 Apocalypse in X-Men: The Animated Series. 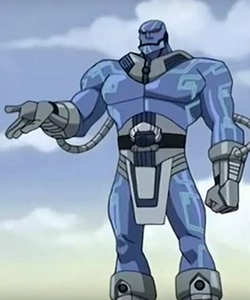 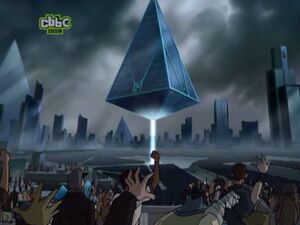 The Age of Apocalypse, as seen in Wolverine and the X-Men. 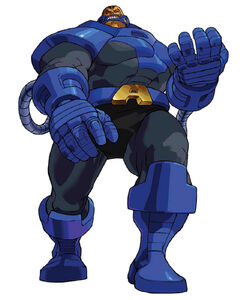 Apocalypse in X-Men vs. Street Fighter. 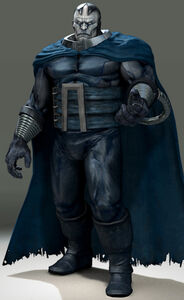 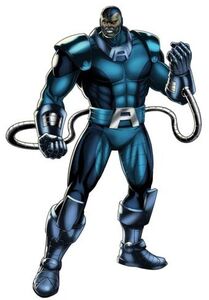 Apocalypse in Marvel: Avengers Alliance.
Add a photo to this gallery 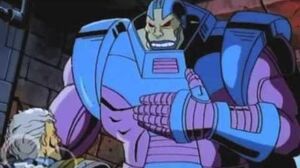 The great quotes of Apocalypse
Add a photo to this gallery

Retrieved from "https://villains.fandom.com/wiki/Apocalypse_(Marvel)?oldid=4198653"
Community content is available under CC-BY-SA unless otherwise noted.