Each pony has limited omnipotence over their realm of influence, immortality and free reign over the mortal world (limited by the higher powers)

To punish mankind for their sins.

The Apocalypse Ponies are the titular villains of a short but memorable Robot Chicken skit parodying the original MLP toys (prior to the FiM phenomena) - they are also parodies of the Biblical Four Horsemen of the Apocalypse.

They are all voiced by Seth Green.

The skit begins with 2 children drawing offensive graffiti on the walls when their parents catch them and tell them they will be punished - (which they seem oddly thrilled about) - sure enough four little ponies arrive on the scene, the Apocalypse Ponies (as the song says "punishment for their sins").

The ponies proceed to introduce themselves via spreading chaos - starting with Pestilence Pony, who poisons the air, then Famine Pony, who withers those she passes over. War Pony then begins to burn the house down and finally Death Pony arrives to annihilate the family with her Satanic powers - at the end of the skit the stupidity of the humans in Robot Chicken is highlighted in a grimly comical scene in which the little girl's smiling skull yells out "I love you Apocalypse Ponies!". 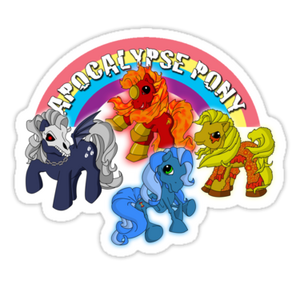 The original logo for Apocalypse Pony. 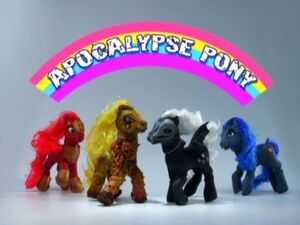 The current logo for "Apocalypse Pony". 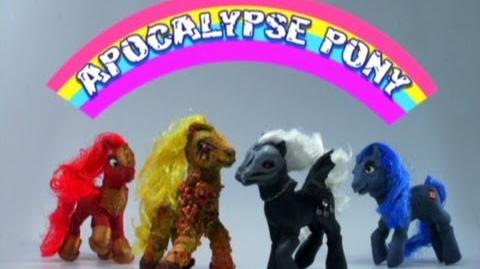