Leader of the Mythos Cyborgs

Wipe out humanity to create a new and peaceful Earth.

Apollo is the leader of the Mythos Cyborgs and a major antagonist in the Mythos arc of Cyborg 009. Apollo believes himself to be a Greek God, and that it is his duty to eliminate humanity to create a better world.

Apollo was one of the Mythos Cyborgs created and developed by Dr. Gaia and Black Ghost. Because Gaia believed cyborgs would be more powerful without a "human heart", Gaia wiped all of Apollo's memories.

Upon his awakening, Gaia told him and his fellow cyborgs that they were gods from Mt. Olympus and that it was their duty to punish humanity for its sins.

Apollo and his gods caused natural disasters all throughout the world, eventually drawing the attention of the 00 cyborgs. However, the cyborgs were no match for Apollo and the gods superior strength, and they were only saved when Artemis intervened in the battle and convinced Apollo to leave.

Apollo was later questioned by Dr. Gaia as to why he didn't kill the 00 cyborgs with his superior strength. Apollo simply told him that mere cyborgs couldn't compete with him, but also that they should be eradicated. When Artemis informed him that the 00 cyborgs had arrived on Magma Island, Apollo sent out Achilles and Minotaur to deal with them. After Achilles was killed by 009, Apollo appeared and mortally wounded the cyborg.

Gaia later berated Apollo again for not killing the 00 cyborgs, but Apollo stated he would eliminate them another day and that right now they would hold a memorial service for Achilles. At the memorial, Apollo defended his sister Artemis from questions about her suspicious behavior towards the cyborgs. However, Artemis declared she was leaving the gods and gave Apollo her two servants: Atlas and Pan.

Apollo and the Greek Gods fought against the 00 cyborgs when they returned to Magma Island, with Apollo taking on 009. However, when Apollo flung a fireball at 009, Artemis appeared and absorbed the blast. Artemis revealed to Apollo that Gaia had shot her, and that they were really just cyborgs created by him, before succumbing to her wounds. Apollo swore vengeance on Gaia and stormed into the scientist's laboratory, pursued by 009. Apollo killed Gaia and told the cyborgs what Gaia had said to him when he first woke up. Despite Gaia's energy reactor overloading and causing the island to collapse, Apollo refused to leave, not being able to comprehend that he and the others weren't gods. 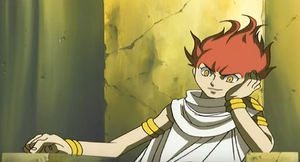 Apollo on his throne. 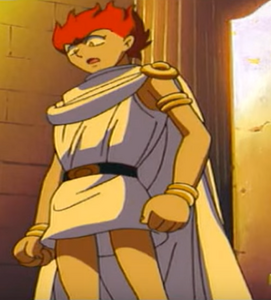 Retrieved from "https://villains.fandom.com/wiki/Apollo_(Cyborg_009)?oldid=3437022"
Community content is available under CC-BY-SA unless otherwise noted.