Leader of the Blackstone Legion

Create an age of war by pitting the factions against each other and bring out the strongest people in society. (succeeded)

Apollyon is the main antagonist and final boss of the story mode of For Honor. She is the chief warlord of the Blackstone Legion and intended to break the peace between the Knights of the Iron Legion, the vikings of the Warborn and the samurai of the Chosen.

Apollyon is voiced by Catherine Kidd in English, Hiroko Kiso in Japanese, and Kerygma Flores in Spanish.

Apollyon was born in the scrablands of Ashfeld. During her youth, Apollyon saw all the horrors of war and never forgot, remembering it as a lesson.

Initially a member of the Iron Legion herself, Apollyon grew dissatisfied when the peace between the factions started. Together with fourteen others, Apollyon left the Iron Legion to found the Blackstone Legion, intending to manipulate the factions into open warfare once more in order to usher in "an age of wolves". After founding the legion, eight of the members claimed the title of warlord before Apollyon but they all fell. Only Apollyon survived when she claimed the title and became warlord of the Blackstone Legion. She and the six remaining warlords took on demon names afterwards to remind them what they must become to change the world according to their vision.

Manipulating the Vikings and Knights

After viking attacks endanger the last Iron Legion sanctuary in Ashfeld, Apollyon sends her Blackstone Legion to save them. They manage to scare off the vikings and take in the remainders of the Iron Legion, making them part of the Bloodstone Legion. However, Apollyon notices that the Warden, a newly-recruited member who was pivotal to their victory in Ashfeld, seems uncertain about the Legion's extreme methods. With help of the Warden, Apollyon and the Blackstone Legion are able to conquer the entirety of Ashfeld.

While journeying with the Legion, the Warden is sent to eliminate some Iron Legion defectors. After killing some of them in their base, the Warden faces another group of defectors but just in time, Apollyon sweeps in and comes to the Warden's aid. After she kills enough men to send the traitors running, the defectors find the exit guarded by more Blackstone Legion warriors. Apollyon and the Warden then eliminate the remaining defectors while the Legion prevents them from fleeing. In the battle, Apollyon takes a sword hit to the back and a dagger to the side but remains fighting nonetheless, even saving the life of the Warden. After the fighting is done, the Legion rounds up the remaining defectors. Two of them stand up to Apollyon and attempt to kill her but are swiftly defeated and apprehended. Apollyon then holds a brief speech to the remaining prisoners, reminding them that only sheep wait for their own slaughter. Beheading two of them with one swordstroke, Apollyon then gives the order to have the remaining prisoners slaughtered. The two attackers, however, she welcomes into the Blackstone Legion.

Apollyon then leads the Blackstone Legion against Valkenheim, a stronghold of the vikings. After her second-in-command, Holden Cross, lowers the bridge for the main army, Apollyon strides over the bridge among her forces. As she does not want to leave a force behind at Valkenheim to guard the prisoners, Apollyon orders them all executed. The Legion continues their march north and eventually reaches another viking fortress. To avoid an open attack, Apollyon sends one of her own, the viking peacekeeper known as Mercy, to clear the path. Mercy indeed manages to sabotage the fortress' elevator mechanics and takes out the vikings in her way. Afterwards, she returns to the Legion and reports to Apollyon that the mission was a success.

With the fortresses in their way eliminated, Apollyon leads the Blackstone Legion against the viking's main stronghold of Svengard. By attacking Svengard, where the true warriors of the vikings live, Apollyon hopes to rattle the vikings from their peaceful living and return them to their life of war. During the battle, the Warden fights Gudmundr, the chieftain of the vikings, and ends up falling to the ground and becoming unconscious. He is awoken by Apollyon who merely tells him to get back onto his feet.

The Warden later learns from Mercy that Apollyon chose to attack Svengard because that was the place where the vikings stored their seed grain. With no new harvest, Apollyon expects that famine and hunger will lead the vikings to fight and kill each other over the little food remaining. The brutality and extreme methods of Apollyon cause the Warden to forsake the Blackstone Legion.

After the batte is won, Cross asks Apollyon why they will not burn all the food. Apollyon explains that burning all the food would cause the viking clains to unite, but leaving scraps enough for just two or three clans would ensure that fighting broke out amidst the vikings. Their plan a success, Apollyon then tells the Legion that they will march home. Returning to Ashfeld, Apollyon and the Blackstone Legion continue to rule their land and are forced to put down several rebellions.

Indeed, fighting breaks out between the vikings and after taking out an especially vicious viking clan, another viking clan decides to celebrate their newly-found passion for war by raiding the samurai cities which have grown weak over the years. During the raid, the vikings are unaware that they are followed by the Blackstone Legion. Apollyon witnesses the vikings plundering a samurai fortress, revealing that the vikings have indeed found their way of war again. Fueled by their victory, the vikings attack the great samurai city, eventually breaching its walls two years later.

Although the samurai are about to fall and are severely outnumbered, Apollyon is aware of a samurai warrior, called Orochi, who alone is able to turn the odds against the vikings. However, that warrior is currently imprisoned in the samurai city. As Apollyon is aware that that warrior will be released, she expects the Orochi to turn the tides of war, which would lead to an equal and balanced war of all factions exactly like Apollyon's vision.

While the samurai manage to fight back the vikings, Apollyon masses the Blackstone cavalry. After having successfully driven off the vikings, the samurai attempt to bar the gates but are overrun when the Blackstones ride straightly into the city, led by Apollyon. Apollyon gives her legion the order to ride for the palace. The Blackstones successfully invade and conquer the palace and capture the samurai leaders. After disposing of the Emperor, Apollyon has the remaining five leaders brought before her. She tells the first of them that he will take the emperor's place as leader of the samurai but when the Daimyo refuses, Apollyon executes him as well. She then gives command of the palace to the only of the leaders who shows defiance. The other leaders, she releases deep in the mire, hoping that the leaders would fight each other to claim the Emperor's power and that the fighting would lead to a civil war between the samurai.

However, the samurai unite rather quickly under the sole remaining Daimyo, Ayu, and in contrast to the years Apollyon had expected the civil war to last, it lasts mere days. This allows the samurai to unite against the common foe, the vikings which had not yet had the time to flee the Myre with their bounties, and to drive them back. This marks the first failure in Apollyon's plan.

Furthermore, the united samurai travel to Ashfeld to take down Apollyon. They find that Ashfeld has changed and that Apollyon is as generous to her subjects as to her enemies. In addition, the Warden and Holden Cross lead an army of Blackstone defectors, substantially decreasing Apollyon's forces.

During the battle, Orochi confronted Apollyon inside the fortress tower. When Orochi arrived, he witnessed Apollyon slaying six knights of the enemy Legion in combat. Seeing the Orochi enter the room, Apollyon remarks that the Dawn Empire has finally arrived. She then attacks the Orochi, resulting in a fierce battle. Orochi is able to beat down the Orochi but flees when the entire tower starts crumbling due to the heavy fire of the catapults. She then found a barred door cut her off by some stairs where she fought the Orochi again but was beaten back and cornered at a balcony. She then basically lamented how death is inevitable but that a true warrior is someone who does not cower in the face of death but faces it head-on before engaging the Orochi one final time. Although she is very quickly defeated, the Orochi withheld from slaying Apollyon, stating that there will be peace now and that her death would be meaningless. Apollyon laughs at that, claiming that both Legion and Samurai came into their home with armies and sarcastically asks the Orochi how he expects this to result in peace. Indeed, as the battle against the Blackstone Legion is done, the samurai and the Iron Legion start going up against each other and with the arrival of viking raiders, all factions are at war with each other once again. Orochi and the severely wounded Apollyon witnessed this from the tower with Apollyon even throwing her sword into the mix.

However, Apollyon died victorious as she managed to create a continuous war between the factions. The war between the factions would go on for seven years until the leaders would finally come to an agreement of peace continuing in the multiplayer. Ironically, this peace would come from the very same Warden that she spoke to nineteen years before during the invasion of Godmunder's fortress. This however would not last as Astrea, the supposed reincarnation of Apollyon and a former Blackstone, would invade Heathmoor and destroy the Truce of Wyverndale to start the war anew once more, continuing where Apollyon left off and even creating a new faction, The Order of Horkos. 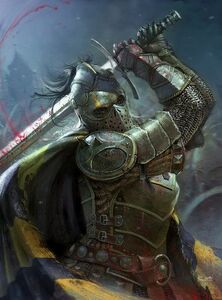 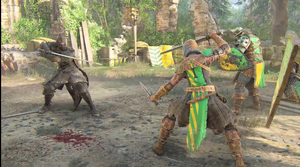 Apollyon squaring up against some defectors. 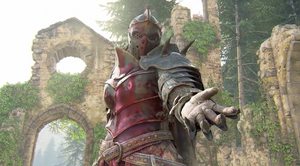 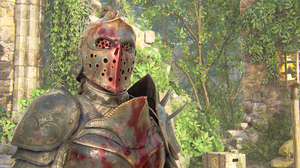 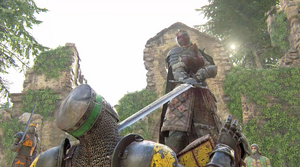 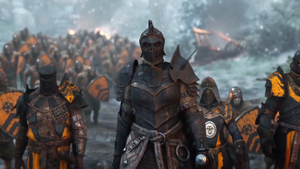 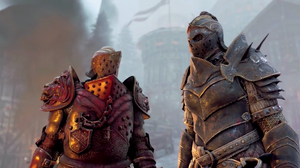 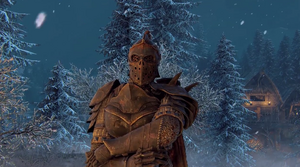 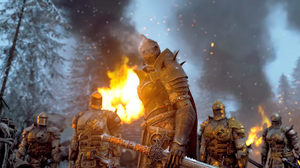 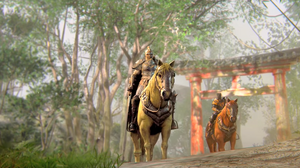 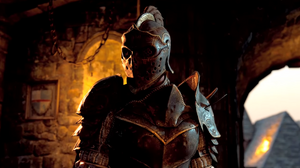 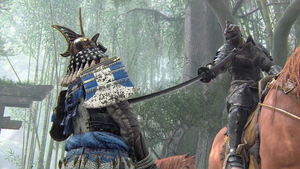 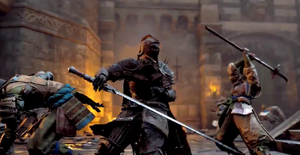 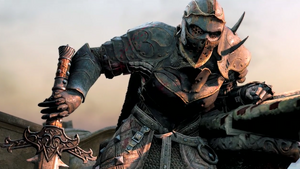 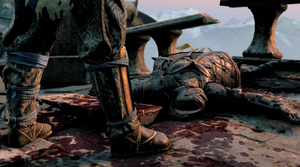