Having sex.
Murdering others.
Playing chess.

Sacrifice Rin to Yggdrasil, the tree of all life no matter what it takes.

Apos is the main antagonist of the six-episode anime, Rin: Daughters of Mnemosyne. He is essentially an eternal being who is revealed to be a current hermaphrodite guardian of a mythical tree known as Yggdrasil that produces several Time Fruits which made several female humans becoming an immortal and several male humans becoming ravenous angels. He is also the fiend behind Rin and her best friend, Mimi's, tortured existence and desired to become the permanent guardian of Yggdrasil for all eternity.

Apos is voiced by Akira Ishida in the Japanese version who is famous for voicing the likes of Zeref Dragneel from Fairy Tail, Otto Apocalypse from Honkai Impact 3rd and Kaworu Nagisa from Neon Genesis Evangelion and by Todd Haberkorn in the English dub who is best known on voicing characters like Nobuyuki Sugou from Sword Art Online, Natsu Dragneel from Fairy Tail and Death the Kid from Soul Eater.

Apos appears in the show as a youthful and handsome man who is revealed to be an immortal over 1.000 years old. His most notable feature is his golden platinum hair and his dark magenta eyes and has an average height of five feet ten and has angelic features to compliment his appearance as a handsome, pretty boy such as his slender figure, gentle smile and soft spoken voice.

However, his most notable feature of his body is that he is a hermaphrodite who possessed both male and female sex organs. This makes him possess several qualities of an angel that made him able to forcefully subjugates women that surrounds her and an immortal as he is unable to die and live long for thousands of years while still looking youthful even after the timeskip that happened 60 years later to the future. These features, according to him, makes him closer to a "godlike being".

Despite his seemingly beautiful and innocent appearance. His personality doesn't match his beautiful feature as he was revealed to be a sadistic angel masking himself under the veneer of a choir boy due to him not having bound with human morals and virtues. His sadistic personality was shown when he was asked by Rin what he wants to do with the world in the final episode due to the suffering he had caused across the world in which he responded by saying "I Want to Taste It!".

This all makes sense due to his desire eat several time fruits that were produced from the female immortals as it was revealed that their suffering improves the taste of said time fruit and to do that, he had a penchant on torturing or even raping several female immortals that he kidnapped in order to enhance the exquisite taste of the time fruits.

In addition to all of this, Apos utter sadism can be traced back on how he had no compunctions on ruining the heroine, Rin Asogi, and Mimi's life or other innocent people around him such as making his top mercenary, Laura, to disguise herself as Rin to kill several innocent immortals across the world in which he hopes on ruining Rin's reputation or at one point, he kills Rin's own lover which is revealed to be his own father, Tajimamori and turning her current lover into a ravenous angel so that Rin could kill him in self defense. Apos's sadism finally reaches it's zenith when kickstarts a war between immortals and humans by causing a nuclear explosion with the intention of making them destroying each other.

Apos had a hobby on playing chess and doing several bondage sessions towards innocent female immortals by impaling them when they lost to his own game. This makes sense as it was revealed that Apos himself is a skilled chessmaster and a manipulator and secretly engineers several evil plots throughout the series behind the shadows such as sponsoring Sayara's research or convincing an innocent person to use his angelic powers to take revenge to those who wronged him.

Apos is the fiend behind Rin (the main character) and Mimi's (her best friend, co-worker and lover) tortured existence. He's also an eternal being obsessed with sacrificing Rin to Yggdrasil, the tree of all life. 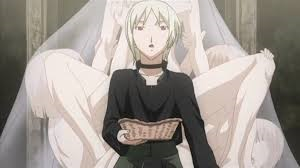 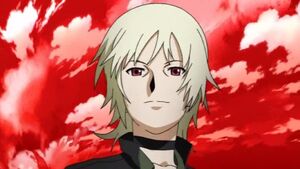 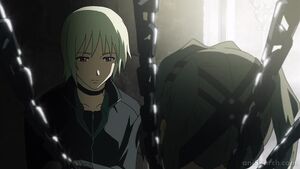 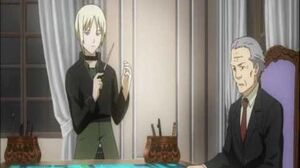 Apos plays with pointy objects
Add a photo to this gallery
Retrieved from "https://villains.fandom.com/wiki/Apos_(Rin:_Daughters_of_Mnemosyne)?oldid=3700327"
Community content is available under CC-BY-SA unless otherwise noted.