Aid Griffith in expanding his kingdom and purging his potential enemies.

Apostles (使徒 in Japanese) are the central antagonists of the manga series Berserk, and its anime adaptations. They are former humans that in a moment of ultimate an utter despair have used Behelits to sacrifice something or someone they appreciated or loved to transcend their humanity, becoming monster-like servants of the God Hand in the process. Each Apostle receives a demonic body capable of transformation. Every 216 years, they gather to the place chosen for the Eclipse ceremony, where they can feed off of the sacrificed.

Some Apostles have been known to defy the God Hand's will, notably Wyald and Emperor Ganishka, either because of their unruly nature or their hunger for power. While the one "commandment" imposed on all Apostles is "Do as thou wilt", the Apostles' doings do not receive protection through that commandment, enabling Apostles who are loyal to the God Hand to exact retribution on rebellious Apostles.

The Apostle forms of different Apostles vary greatly from warped versions of animals to demonic and hellish monstrosities with their human forms appearing anywhere on the body. Most, but not all Apostles are much larger than an average man; stronger ones like Irvine and Locus are more medium in height. The features of their true form is often reflected in their human form; for example Wyald's ape like face. More refined Apostles like Locus, Irvine and Grunbeld maintain most of their former human life. Only two exceptions (Rosine and the so-called Egg of the Perfect World) have preferred non human forms. When an Apostle is killed, his or her body reverts back to its original human form from before they became an Apostle, with all injuries remaining on the human body analogous to the injured parts of the Apostle's body. (Note Wyald's old man form torn in half and with Guts' broken sword through his neck.)

Almost every Apostle shows up in the series in a human form, but they are all capable of transforming into something that is typically larger than their previous form. The act of doing so doesn't seem to be painful in the slightest to any Apostle and varies with different Apostles. Some are instantaneous while others might do a special stance or action before changing form. It should also be noted that changing form is not permanent, and Apostles can always return back to their human states whenever they desire (as shown with Zodd frequently). 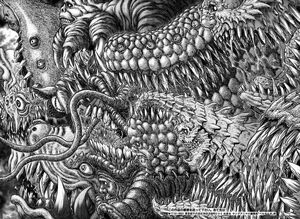 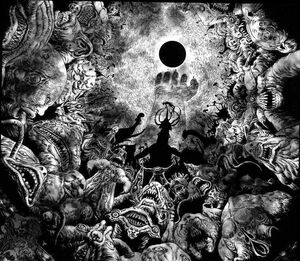