Tormenting Apple Bloom in her nightmares

Apple Bloom's Shadow is the main antagonist of the My Little Pony: Friendship is Magic season 5 episode "Bloom and Gloom".

She was voiced by Michelle Creber, who also does the voice of the Apple Bloom and used to do the singing voice of Sweetie Belle.

When Apple Bloom confronts the villain, she appears in shadow form with orange eyes and mouth, telling the traumatized filly she's been assisting her with her Cutie Mark problems.

When Apple Bloom tries to escape the shadow, Princess Luna arrives in Apple Bloom's dream and tells her that the creature showing AB these visions is her shadow, explaining that Apple Bloom herself was causing the nightmares to herself due to her anxieties.

Its completely ambiguous of what happened the shadow afterwards. 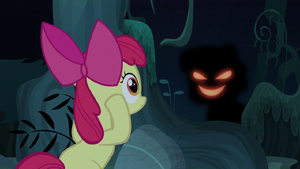 "If there's a problem with your family, I'm sure I can help with that too." 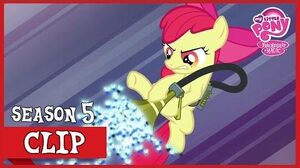 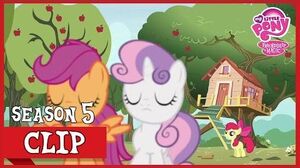 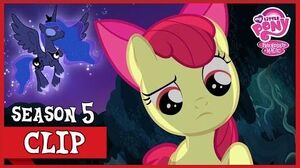