All the powers of Aquaman plus those of a zombie

Kill all inhabitants of Atlantis and the Earth's oceans (succeeded)

Kill the surviving humans (ultimately failed)
Destroy the Amazons' homeland (succeeded (at cost of own life)).

Aquaman is a major antagonist of the grim horror series known as DCeased, having succumbed to the Anti-Life Virus that claimed many other heroes around the globe he would forever be changed from a proud ruler of Atlantis and defender of Earth's oceans to a monster devoted to the absolute destruction of all survivors, as well as his own people.

Aquaman rose from the ocean shortly after the Anti-Life Virus became active, unaware that most of humanity had now been reduced to murderous zombie-like beasts by the Anti-Life Virus he boarded an apparently abandoned ship only to be attacked by a frenzied mob of infected, who clawed and bit at him.. ultimately causing him to succumb to the same infection.

When Aquaman was next seen he launched a brutal and deadly attack on Atlantis, completely decimating the empire and transforming its population into infected (as well as numerous ocean-dwelling animals) - a few survivors fled to the surface to seek aid and answers while Aquaman continued his unending bloodshed below the waves.

Near the climax of the DCeased arc plans are made for human survivors to be launched into space via star-ships known as Arks, some humans had been put under the protection of the Amazons after Wonder Woman convinced them to do so - yet in order to support these new arrivals the home of the Amazons had to be lifted higher out of the ocean to make more landmass, by doing this the heroes inadvertably alerted Aquaman to the location of the formerly secure island.

Determined to kill the survivors and anything else in his wake Aquaman arrived, riding the Kraken itself, alongside a legion of infected Atlanteans - a fearsome war erupted between the Amazons and Aquaman's army, with Aquaman's army ultimately overwhelming the island but not before the human survivors succeeded in fleeing : the Amazons willingly sacrificing themselves for the greater good.

While his army ultimately succeeded in destroying the Amazon's home Aquaman himself was killed by an arrow to the skull by Green Arrow - ending his reign of terror. 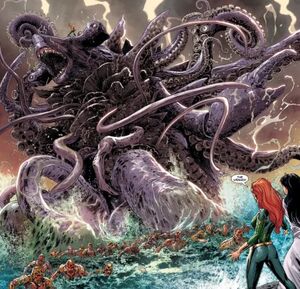 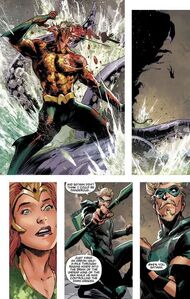 Retrieved from "https://villains.fandom.com/wiki/Aquaman_(DCeased)?oldid=3555444"
Community content is available under CC-BY-SA unless otherwise noted.