Note: This article is about an alternate version of Aquaman seen in Justice League: The Flashpoint Paradox, not the mainstream Aquaman, who is nothing like his Flashpoint counterpart.

Aquaman in the Flashpoint universe, is the ruler of Atlantis was taken to live with the Atlanteans years before, where he did not learn compassion. He is also one of the two secondary antagonists (along with Wonder Woman ) of the 2013 DC animated original film, Justice League: The Flashpoint Paradox.

He was voiced by Cary Elwes, who voiced Paxton Powers in Batman Beyond, he also portrayed Lawrence Gordon in the Saw franchise, William Boone in Rudyard Kipling's The Jungle Book, Larry Kline in Stranger Things and Sir Edgar in Ella Enchanted.

In the alternate "Flashpoint" universe, Orin was brought back to Atlantis when he was a teenager, due to the death of his grandfather. As a result, the young Arthur never learned compassion and kindness from his father, who was killed by the Atlantean agents sent to recover him.

He had fallen in love with Princess Diana after saving her from a sea creature and was ready to marry her when Diana's mother was killed on their wedding day.

Aquaman and all of Atlantis wage war against Wonder Woman and the Amazons. The war began when Diana's mother, Hippolyta, was killed on Aquaman and Diana's wedding day, and in an act of revenge, Wonder Woman later killed Mera, who had apparently married Aquaman. The wedding was to happen after Atlantis was discovered by the Amazons when Aquaman saved and healed Diana when she was injured by a sea creature. Both races then revealed themselves to the outside world.

Aquaman caused Western Europe to sink into the sea killing more than 60 million people, intending to sink England as well and is later seen alongside his brother, Ocean Master, in the flooded remains of Paris, where they attack. the pirate Deathstroke and the members of his Sonar crew. Icicle and Clayface. After taking them out, Aquaman let the pirate Deathstroke die, as he had other work to do. He also captured Captain Atom to power a doomsday device capable of sinking entire continents.

However, it was revealed that Hippolyta's death was a casualty of the war, as the real target was Wonder Woman. A plot between Orm and Penthesilea was also revealed to prevent the union of Aquaman and Wonder Woman. In the present, Aquaman reassigns Siren and Ocean Master to assassinate Terra on New Themyscira. The mission failed, and Siren was killed by Diana's aunt, Penthesilea. The Amazon Furies then attack reinforcements led by Aquaman, who faces their leader, Wonder Woman, in battle.

During their fight, Wonder Woman tells him that they have both been tricked. She discovers that her brother Ocean Master kissing Penthesilea is both responsible for the war between the Atlanteans and the Amazons and that it was a ruse planned by them. The Atlanteans decide to go to the surface, but their attack is backfired by Ocean Master, so Aquaman believes that Diana had set a trap. She escapes from Aquaman, who rejects her word. Aquaman then arrives in New Themyscira. A final battle is fought between Emperor Aquaman and Wonder Woman; however, they are both approached by Flash and the heroes, who are there to stop the war.

Finally, Aquaman led a final assault on what was now known as New Themyscira, dealing personally with Wonder Woman, although prior to that confrontation he had to deal with Cyborg and his team of heroes interfering with the war. Aquaman tore Cyborg apart and was ready to deliver a fatal blow when Kal-El the Kryptonian used his heat vision to cut Aquaman's right arm from his body.

When Wonder Woman was about to oblige Aquaman to surrender, he activated the quantum power weapon to deny his opponent any satisfaction from victory before he breathed his last, destroying the world in the process. But his crime against humanity is erased after the Flash stops his doppelganger to switch to an alternate timeline. 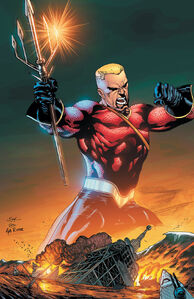 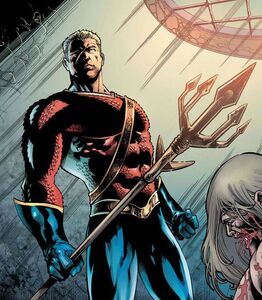 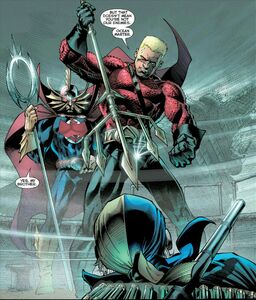 Aquaman kills Deathstroke (in the comics) 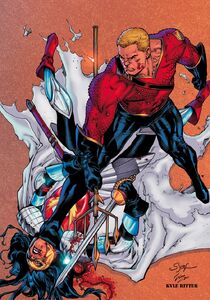 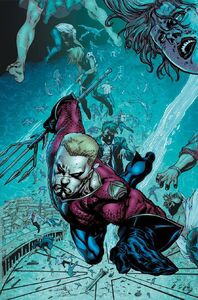 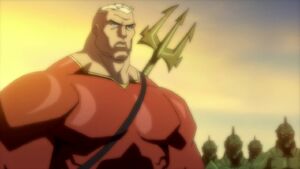 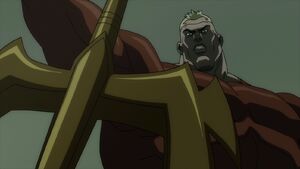 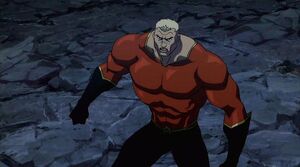 Aquaman in his last war 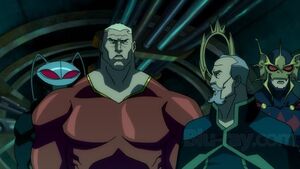 Flashpoint Aquaman and his Atlantean army

The battle between Wonder Woman and Aquaman 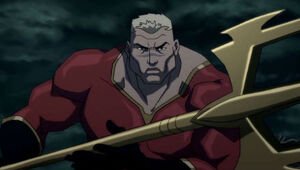