Ar-Pharazôn the Golden, also known as Tar-Calion, is one of the two main antagonists of the Akallabêth, part of The Silmarillion by J. R. R. Tolkien.

Ar-Pharazôn was the 25th and last King of Númenor. He was an arrogant, conceited, manipulative, barbaric, greedy and cruel man who wanted to rule the world. Under the corrupt influence of Sauron, Ar-Pharazôn was convinced to assault Valinor, the land of the Valar, in order to gain immortality.

Pharazôn was born in the year 3118 of the Second Age. He was the son of Gimilkhâd, the younger brother of King Tar-Palantir. He was originally friends with Amandil, the last Lord of Andúnië and leader of the Faithful - Númenóreans who were still loyal to the Valar. Pharazôn eventually departed for Middle-Earth. While in Middle-earth, he commanded the Númenórean armies. After the death of his father, Pharazôn returned to Númenor with great wealth, which he distributed among his people.

137 years later, when Tar-Palantir died in 3255, Pharazôn forced the dead king's daughter Miriel to marry him, changing her name to Zimraphel, the Adûnaic form of her name. This was against her will and went against the laws of Númenor prohibiting marriage between first cousins. He proceeded to usurp the throne and called himself King Ar-Pharazôn.

Soon after he became King, Ar-Pharazôn heard of Sauron's assaults on Númenórean settlements in Middle-earth. The King's captains told him that Sauron wished to usurp the settlements and claim himself as King of Men. The furious King decided that he would call himself King of Men and take Sauron as his servant. After 5 years of preparation, Ar-Pharazôn and his fleet sailed to the Havens of Umbar. They assaulted Mordor next, and Sauron's servants were enthralled by the might of the King. Sauron humbled himself before Ar-Pharazôn, who decided that Sauron would be taken as a hostage to Númenor.

When Sauron arrived in Númenor, he became the advisor to Ar-Pharazôn and used his power to corrupt the Númenóreans. Sauron exploited the people's fear of the Valar and convinced them to worship Morgoth and denounce Eru Iluvatar. Ar-Pharazôn began to worship Morgoth, at first in secret, but then openly. Sauron even advised Ar-Pharazôn to cut down Nimloth, the White Tree of Númenor. Ar-Pharazôn was reluctant at first, fearing that the line of Kings would perish, as prophesized by Tar-Palantir. But he agreed and the tree would eventually be felled.

Ar-Pharazôn learned that Isildur, the grandson of Amandil, had stolen a fruit from Nimloth. Ar-Pharazôn dismissed Amandil from his position. In Armenelos, the capital of Númenor, the King, and Sauron constructed a massive temple dedicated to the worship of Morgoth. An altar was built for sacrifice, and its first victim was Nimloth. The Faithful would be sacrificed en masse, and so would the Men of Middle-earth - in the hopes that Morgoth would release them from death. He also imposed capital punishment on those who dared to ascent the Meneltarma, which once was a holy mountain of Númenor. Ar-Pharazôn had become the greatest tyrant since Morgoth, but he was still the pawn of Sauron.

Eventually, Ar-Pharazôn began to grow old and feared death. He became desperate for a solution. Sauron came up with a plan: attack Valinor and gain everlasting life. Ar-Pharazôn agreed to this. And 192 years later in 3310, he began to build the Great Armament.

While this Armament was being constructed, the Valar sent warnings to the Númenóreans. Thunderstorms and eagle-shaped clouds were sighted, and the ground began to quiver. But the King was not moved and proclaimed that he would conquer Valinor.

201 years later, the Armament was completed in 3319. Ar-Pharazôn boarded his ship Alcarondas, clad in armor. They sailed at sundown, never again to be seen by mortal eyes. Upon seeing the great mountain of Taniquetil, the King contemplated retreat, but he decided to press on. The army of Men assaulted Tirion, where Ar-Pharazôn proclaimed his desire for conquest.

The Valar responded by calling on Eru for aid and laying down their guard over Arda. Eru broke the world and made it round, making Valinor inaccessible to Men. Ar-Pharazôn and his soldiers were killed by falling hills, where they would remain until the last days. Númenor was sunk beneath the sea, killing all who did not flee and culminating in the death of the King's wife Zimraphel as she tried to ascend the Meneltarma. 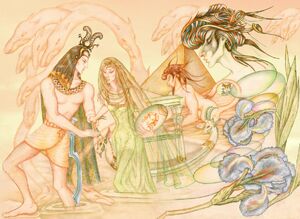 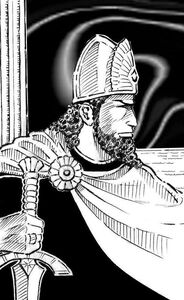 Retrieved from "https://villains.fandom.com/wiki/Ar-Pharaz%C3%B4n?oldid=3476095"
Community content is available under CC-BY-SA unless otherwise noted.