Destroying any Planets with meteors.

The Arachnids (more commonly known as "Bugs", and "Archies" as well as called "Pseudo- Arachnids" in novel) are an alien race that has evolved and conquered several planets outside Federation space in the Starship Troopers franchise. They are believed to be mindless hive creatures controlled or instructed by a Brain caste.

In novel, Arachnids are more portrayed as alien invaders that similar with other advanced races like Martians or Harvesters as, while living in social structure similar with ants or bees, possesses advanced technology such as spacecraft, beam and missile weapons that their non-novel incarnations mostly lacks of. Their kind of technology is unexplained whether was organic or purely mechanical.

Much like in non-novel medias, Arachnids society is based on a caste system in which they can coexist prosperously. It is theorized they don't have emotions — at least of the human sort — and they never retreat unless they know they can't win. The individuals of the lower castes, such as Warriors, are telepathically connected to the Brain Bugs. The Bugs won't hesitate to kill their own kind of any caste should the situation demand it; they are ready to expend thousands of Workers in a diversionary action, or to wipe out their ruling castes to prevent their capture.

Thanks to sheer numbers and ability to breed in faster rate, Arachnids views death with little to no meaning. Combined with the large numbers of Warriors and enhanced parthenogenesis ability, they favor large swarm tactics, and human-wave attacks (or "Bug-wave" attacks) to overwhelm their enemies. At one point in the book, a Mobile Infantry trooper notes that "they expend Warriors like we expend ammunition". This, combined with their advanced technology, making them a deadly invasive race.

They are described as looking like "a madman's conception of a giant, intelligent spider." Also, the Bugs can see into the infrared spectrum: though pitch dark to human eyes, the underground corridors of a Bug colony are well-lit when viewed through the infrared "snoopers" of the Mobile Infantry's Marauder Suits.

The Arachnids are stated to have millions of years of evolution and are, in the case of survival capability, the perfect species. They have the ability to colonize planets "by hurling their spore into space" and possess a social structure which fits their mental capabilities.

Unlike their original novel incarnations, they mostly behave more like mindless creatures except Queen, Brain Bug, and God Bug as well as lack of advanced technology. In spite of this, they have more caste and can survive the vacuum space, which also allowed them to hurl their seeds to other planets. 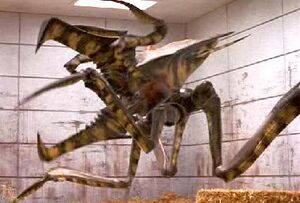 The Warrior Arachnid, the basic grunt of the species. 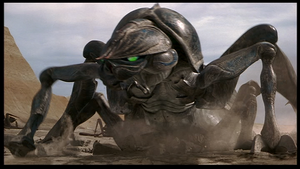 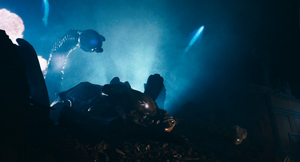 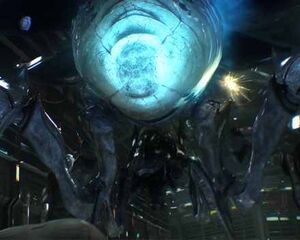 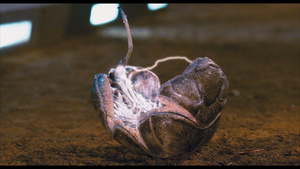 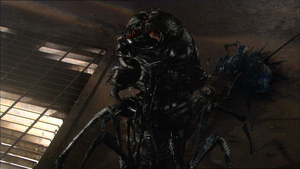 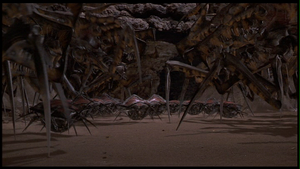 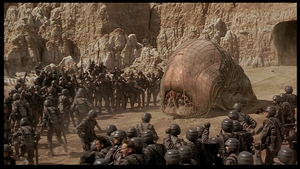 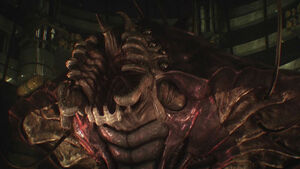 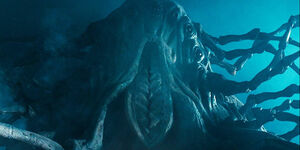 The Behemecoatyl, the leader of the arachnids 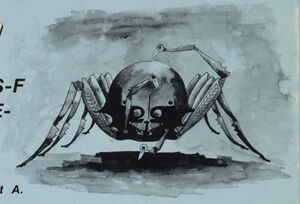 The novel version of a warrior arachnid.
Add a photo to this gallery

Retrieved from "https://villains.fandom.com/wiki/Arachnids?oldid=3447628"
Community content is available under CC-BY-SA unless otherwise noted.