The Angel of Birds

Cause the Third Impact

Arael is the 15th Angel and one of major villains in Neon Genesis Evangelion. This multi-winnged entity was considered as one of the strongest Angels due to it's ability to tear a victim's mind through extremely long distance, right at the almost unreachable place - out of the Earth's atmosphere.

Though eventually killed, the entity has left the everlasting damage on Asuka's mind, stripping her from her ability to pilot her Eva.

Arael is a multi-winged, giant entity that having it's whole body (with the exception of the core that held outside its main body by two smaller wings) seemingly made out of intense white light which so bright that one cannot see it's core. Its wingspan was estimated to be to be several times larger than an Evangelion, based on its size relative to the Spear of Longinus when speared by it.

When pierced by the Spear of Longinus, Arael's body breaks down and swirls into a vortex, finally vanishing in a pinpoint of light. An outburst of red blood is briefly visible upon the Spear's exit, implies that the creature possesses flesh and bone like some Angels before it albeit coated by bright light.

While other Angels engage any Angel-based entities or anything that stood on it's way on sight in physical confrontation, Arael instead confronted them with mental attacks by tearing their mind apart through analyzing their memories and forced them to relieved the said memories. Although, it's motives when tearing Asuka's mind when she tries to engage it on Earth was either due to it indeed attacked her psyche or intended to learned about humanity from her for the next confrontation is ambiguous, but the purpose was unmistakably to ease it's mission to cause Third Impact.

It's unclear why it doesn't descent on Earth yet, but aware with Eva's presence with weaponry that can breach it's AT-Field that made the reckless confrontation is much more likely. 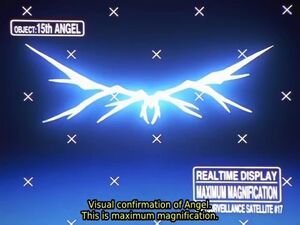