Arawn is the Celtic god of the dead, war, revenge and terror within the Welsh mythology, and he reigns supreme as the ruler of the spiritual realm of Annwn, appearing prominently in the first branch, and alluded to in the fourth.

In later tradition, the role of king of Annwn was largely attributed to the Welsh psychopomp, Gwyn ap Nudd. However, Arawn's memory is retained in a traditional saying found in an old Cardigan folktale:

In the First Branch of the Mabinogi, Pwyll mistakenly sets his hounds upon a stag, only to discover that Arawn has been hunting the same animal. In order to pay for the misdeed, Arawn asks Pwyll to trade places with him for a year and a day and defeat Hafgan, Arawn's rival, at the end of this time, something that Arawn has attempted but has been unable to do so. Arawn, meanwhile, takes Pwyll's place as lord of Dyfed. Arawn and Pwyll become good friends because when Pwyll wore Arawn's shape, he slept chastely with Arawn's wife.

A friendship between the two realms is retained long after Pwyll's death; in the fourth branch, Pryderi, Pwyll's son and lord of Dyfed has received a gift of otherworldly pigs from Arawn. These pigs are eventually stolen by Venedotian magician and trickster, Gwydion fab Don, leading to Pryderi's invasion of Gwynedd. In the ensuing war, Gwydion kills Pryderi in single combat.

In Welsh folklore, the Cŵn Annwn or "Hounds of Annwn" ride through the skies in autumn, winter, and early spring. The baying of the hounds was identified with the crying of wild geese as they migrate and the quarry of the hounds as wandering spirits, being chased to Annwn. However, Arawn himself is not referred to in these traditions. Later the myth was Christianised to describe the "capturing of human souls and the chasing of damned souls to Annwn", and Annwn was equated with the "Hell" of Christian tradition.

Some writers, notably Robert Graves, have written of an incident in which Amaethon steals a dog, lapwing and a white roebuck from Arawn, leading to the Cad Goddeu (Battle of the Trees), which Arawn lost to Amaethon and his brother, Gwydion. The standard text of "Cad Goddeu" in the Book of Taliesin makes no mention of this, but the Welsh Triads records the Battle of Goddeu as one of the "Three Futile Battles of the Island of Britain...it was brought about by the cause of the bitch, together with the roebuck and the plover", while Lady Charlotte Guest notes in her Mabinogion an account in the Myvyrian Archaeology that the battle "was on account of a white roebuck and a whelp; and they came from Hell, and Amathaon ab Don brought them. And therefore Amathaon ab Don, and Arawn, King of Annwn (Hell), fought. And there was a man in that battle, unless his name were known he could not be overcome; and there was on the other side a woman called Achren, and unless her name were known her party could not be overcome. And Gwydion ab Don guessed the name of the man".

According to Koch, the name Arawn may be derived from the Biblical name Aaron, the name of Moses' brother, and so is ultimately of Hebrew origin and meaning "exalted". That the name "Aaron" had currency in Wales as early as Roman times is shown by Gildas who wrote that "Aaron and Iulianus were Christian martyrs at Urbs Legionis (the "city of the legion", probably Caerllion-ar-Wysg) in the time of the Emperor Diocletian.". a cleric of the Old Welsh name Araun witnessed two charters of 860 preserved in the book of Llandaf. However, his association with the hunt has prompted some scholars to associate Arawn with the Gaulish god Cernunnos. 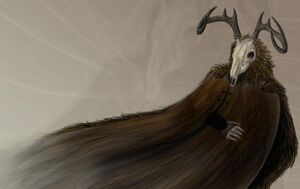 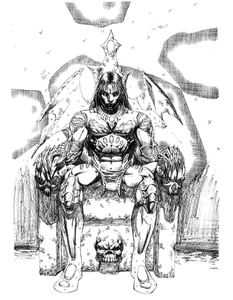 Arawn
Add a photo to this gallery
Retrieved from "https://villains.fandom.com/wiki/Arawn?oldid=3480468"
Community content is available under CC-BY-SA unless otherwise noted.