The Chronicles of Prydain

Rule all of Prydain.

Arawn, also known as Lord Arawn, the Death-Lord (also spelled Death Lord), the War Leader and Arawn Death-Lord, is an evil warlord with unspeakable dark powers who is the main antagonist of the Chronicles of Prydain book series by Lloyd Alexander. He is based on the Celtic god of death in Welsh mythology which he is named after.

Arawn was once a mortal man with magical powers who was tutored by the evil Queen Achren, the ruler of the kingdom of Annuvin in Prydain who than made him her consort. When Achren herself was overthrown, Arawn, who had grown very powerful, took the Iron Crown of Annuvin and became its king. Achren became a servant beneath him but always plotted his downfall.

He later came into possession of the Black Cauldron with which he created a powerful undead army known as the Cauldron-Born. He then attempted to conquer the world of Prydain. He was thwarted in this endeavor by the Sons of Don, a race of warriors from the Summer Country who stood between him and world domination ever since.

The Book of Three

In the first book in the series, Arawn sent his general, the evil Horned King, to amass a vast army with which to topple Caer Dathyl, the mightiest city in Prydain. With Caer Dathyl destroyed Arawn would have been able to enslave Prydain; however, the Horned King was destroyed by Gwydion, Prince of Prydain, Son of King Math, and his army was scattered.

In the second book in the series, "The Black Cauldron", Arawn attempted to take over Prydain by despoiling the graves of fallen warriors and using the Black Crochan to turn them into Cauldron-Born but the Crochan was taken by its original owners, Orddu, Orwen and Orgoch and eventually found its way into the hands of the evil King Morgant who planned to use it to overthrow Arawn and become ruler of Annuvin and Prydain. Morgant was later killed and the Crochan destroyed.

In the final book "The High King", with the Horned King dead and the Crochan destroyed, Arawn's power seemed seriously depleted. However, with the help of the villainous Magg, he stole the Black Sword, Dyrnwyn, the mightiest weapon in all of Prydain but the Sword could only be used by one with a pure heart and so given the fact that Arawn was evil personified, it was quite useless to him so he kept it shut away in a cache beneath a rock in Annuvin.

Unaware that he could not use it, the peoples of Prydain panicked. Arawn allies himself with King Pryderi who commanded the mightiest army in all Prydain and used him to topple Caer Dathyl. With Caer Dathyl out of the way, Arawn sent his legions of Cauldron-Born to conquer Prydain, leaving Annuvin unprotected in the process. The main protagonist, a boy called Taran, led the remaining armies of Don to Annuvin, accompanied by Arawn's former mentor, Achren who had lost the majority of her powers and blamed Arawn.

Meanwhile, Pryderi plotted to overthrow Arawn and steal his power as Morgant before him did but Arawn was aware of this and sends Pryderi on a suicide mission. During the siege of Arawn's fortress Taran found Dyrnwyn and used it to destroy the Cauldron-Born. Arawn then used his powers of shapeshifting to take on the form of Gwydion and attempted to trick Taran into giving him the sword but Taran saw through the ruse and attempted to strike Arawn who turned into a shadow and fled.

When Taran's forces gathered in the main gallery Arawn took the form of a snake and attempted to bite Taran but Achren who could see through Arawn's shapeshifting powers grabbed him and sustained a fatal bite to the neck in the process. Taran decapitated Arawn with the Black Sword, killing him instantly. Taran then discovered that he was the subject of an ancient prophecy saying that some day a boy would wield the Black Sword and vanquish the Death Lord and then become king of Prydain. Taran, being the Chosen One of the prophecy, then ascended his place as ruler of Prydain but the wise enchanter Dallben stated that although Arawn, the ultimate personification of evil within Prydain is destroyed, evil would continue to exist independent of him.

Throughout the series, Arawn shows a contumacious and obsessive lust for power, repeatedly seeking total domination of Prydain, despite already ruling over a wealthy kingdom. In addition to being a ruthless and dictatorial tyrant, Arawn is a cunning and manipulative trickster, just as willing to use mendacity and deception to defeat his enemies as military force. Arawn is obviously highly intelligent and clever, as he was aware that Magg and Pryderi conspired to overthrow him and took steps to ensure that their plans would result in their deaths. When he was mocked by Menwy the Bard, Arawn shattered Menwy's magical harp in a rage. This could indicate him being extremely proud.

Despite his terrifying and dangerous demeanor, Arawn seemed to have a very cowardly and pusillanimous side, rarely leaving the safety of his fortress or engaging any of the protagonists in direct combat. When he first encountered Taran in The High King, Arawn was disguised as Gwydion and displayed a caustic, trenchant, sharp-tempered and passionate demeanor, in contrast to the warm-natured Gwydion, perhaps helping Taran to see through the ruse. This could have been the result of stress from having his lair invaded however.

Whilst usually relying on the strength of his Huntsmen, his Gwythaints, and his Cauldron-Born armies, Arawn was immensely powerful in his own right. He appeared to be immortal though he was obviously destructible. In The High King, Queen Achren (then sorceress) said that if Arawn were to go into Prydain unprotected and in his true form, he would be killed on sight so Arawn always employed his shapeshifting powers when in Prydain. His shapeshifting abilities gave him the ability to take on the appearance of anyone or anything, but when he did he took on the strength and weaknesses of whatever he was disguised as. This led to his downfall in the final book of the series. Arawn was never seen in his true form over the course of the series, although when he was decapitated by Taran while in his snake-form, his body and head transformed into the those of a human figure but his body was wrapped in a black robe and his head was lying face down and both immediately disintegrated, so his physical features remain unknown.

Arawn's malignant influence had more direct effects as well. He captured the Gwythaints and enslaved them with his power, changing them from relatively gentle birds into terrifying and monstrous spies, they were even called the "Eyes of Annuvin". He also gained the Black Cauldron from the three witches name Orddu, Orwen and Orgoch, corrupting it into the instrument that would create his Cauldron-Born warriors. Mortal men who joined with him became the Huntsmen of Annuvin, as fearsome as the Cauldron-Born in their own right. Arawn's powers and the ramifications of them, proved seductive to many prominent leaders, including his champion the Horned King, King Morgant, Magg, and King Pryderi.

Arawn does not appear in the Disney film adaptation of The Chronicles of Prydain but his role is filled by that of the Horned King. Arawn is meant to be the "spirit" trapped within the Cauldron. Arawn was originally intended to be in the film, but was replaced by the Horned King as the main antagonist in The Black Cauldron because the animators felt that people would like the Horned King better since he had horns (similar to Maleficent and Chernabog). However, Arawn did receive a part in the movie. During the prologue, the narrator talks about the history of the Black Cauldron and how Arawn became it.

Arawn's face is apparently engraved upon the cauldron. At certain points in the movie, the face is illuminated. There are several signs that the Horned King once served under Arawn as he says that now the power shall return to this world. Later, the Horned King also curses Arawn's name before being destroyed by the Cauldron. 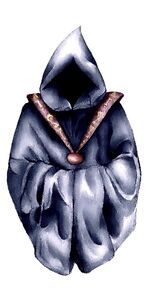 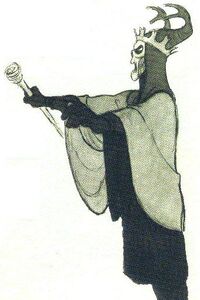