One of Solomon's three magi
Leader of Al-Thamen

Arba is the secondary antagonist of the manga and anime series Magi. She was one of the supporters of King Solomon and also the ancestress of Gyokuen Ren whom she later took possession.

Before falling into depravity, Arba was a caring person as she was closer to Solomon, who he saw her as a sister. When Solomon took away the will of Ill Ilah and became god as a result, she turns against him and her allies by creating Al-Thamen, causing many conflicts, and possessing the body of her many successors just to further her goals to restore Ill Ilah. However, before falling into depravity, Arba have expressed malicious intents such as wanting to murder David when she found out he was taking magoi from Ill Ilah. Before falling into depravity, she did not express remorse when she brutally murdered an impersonator everyone thought was David. When questioned by Sheeba how hard it must have felt to kill David, Arba did not express any remorse, hinting at her lack of empathy from the beginning.

She has been known to be the most sadistic and deranged character of the series, going as far as murdering her ex-friend, Sheeba, with a gigantic smile in her face for opposing her. In addition to her sadism, Arba has no care for anyone and does not about the amount of corruption, death and destruction she causes through leading Al-Thamen. Having possessed Gyokuen Ren, Arba openly shows that she cares nothing for her own family by murdering her husbands and sons and then mocking Hakuryuu for being weak. She also has no care for the lives she have ruined such as abducting Judar and forcing him to become the dark magi for Al-Thamen.

In battle, Arba is shown to be vicious and merciless taking the opportunity to easily overwhelm her enemies and severely harm them. Arba also has a perverse and lustful side as seen by how she molested Hakuryuu in battle only to make him more angry and by how she embraced Sinbad when she found that he had a connection to David and Ill Ilah.

Arba has a special affinity for Ill Ilah and does not tolerate anyone for defiling it. Her intolerance for anyone who harms it or uses it goes as far as betraying her friends in cold blood and destroying Alma Torran. Whenever she can sense Ill Ilah or is in presence of it, Arba tears up often times smiling and celebrating it as well. Arba also does not care if the entire world gets destroyed as seen in the Magnostadt Arc when she tried to summon it. When she cannot hear or sense Ill Ilah, she admits that she feels lonely.

After losing a lot of her powers in her fight against Aladdin, Arba was interested in helping Sinbad become a god in a way to hopefully achieve her own goals. However, she seem to have lost all her sadistic ambitions and desires she had after fighting Aladdin. In some instances, she was interested in escorting Aladdin, Alibaba, Hakuryuu, and Judar through Sinbad's seven dungeons. She shown interest in Alibaba's story about how he ended up in a dimension where Ill Ilah was stored. Arba was also open-minded to the conversation with Alibaba, Aladdin, Ugo, and Sinbad about changing Sinbad's will on the world. At the same time, she admits that she was bored and depressed mostly because nothing would truly change if Sinbad or Alibaba won in their duel. Despite her disinterest, she angrily admits in her conversation with Alibaba and the others that she will destroy the world again, over and over, if they plan to surpass Ill Ilah. She remained disinterested and unmotivated even after the heroes saved the world from David.

Arba was created by David to help Solomon as a fighter. Arba realized that David was taking magoi from Ill Ilah and decides to live with Solomon and plot to kill David. Arba was first see alongside Solomon and Sheeba (who was her friend), during the first years. Arba was the one who taught Solomon to master his powers and also the one who take care of him when they were young. She was necessary in Solomon's resistance to David's Orthodox Church and even helped him and her friends against David. However one day after the battle against the Orthodox Church, Solomon remove the last part of Ill Ilah (the majority part of the being was taken by David).

This act infuriates Arba and causes her to rebel against Solomon and his allies by creating Al-Thamen. She murdered Sheeba (Solomon wife) and proceed to destroy all of Alma Torran reducing it to nothingness. Solomon ended up dying and Arba's body was destroyed in the process. Despite having lost her body, her spirit and the remnants of Al-Thamen existed in a dimension beyond Alma Torran.

In the new world created by Ugo, Arba would go on to possess multiple people who had similar magoi to her. She would have children and groom them to be strong. She would then go on possess the younger body when the older body she inhabits got too old. As part of her modus operandi, she would take possession of many people for many generations. While in possession of these people, she would also spread chaos, corruption, slavery, and inequality through the world through her organization Al-Thamen as a way to one day revive Ill Ilah.

She took possession of Gyokuen Ren and made her murder her husband and two sons through Al-Thamen. Hakuryuu also wanted to know if she murdered her husband and sons, she retorts saying that he was too weak to do anything. At some point, she captured Judar and forced him to become the dark magi of Al-Thamen. She eventually took the throne of the Kou Empire after brutally murdering the emperor there.

With the buildup of dark magoi and finding a vessel in Magnostadt, Matal Mogamett was made into the medium in an attempt to have Ill Ilah descend on the world and destroy it. However, her plan failed. After some time pass, Hakuryuu and Judar confronts her and fights her. Though she had the upper hand through most of the battle, Gyokuen was slain by Hakuryuu. Despite her death, Arba was able to find her way to Hakuei Ren and take possession of her.

Arba as Hakuei Ren, then entered into an alliance with Sinbad and David when she found that Sinbad had a connection with Ill Ilah. She would help Sinbad build up his company. Arba also help Sinbad go after Aladdin so that Sinbad can get him to give him Solomon's Wisdom to gain immeasurable power. Aladdin manages to escape but Arba tried to capture him until she encountered Hakuryuu where he tricked her into giving up important information to her. They managed to escape but Arba tried to look for Aladdin for the past two years.

After two years, Arba manage to locate Aladdin through his telecommunication line to Alibaba. She went to the rift to fight Yunan in order to find Aladdin and nearly corrupted him by turning him into a dark magi. Aladdin, Morgiana, and Hakuryuu appeared to fight her. Hakuryuu and Morgiana fought her while Aladdin treated Yunan. After treating Yunan, Aladdin fought Arba and despite having revived Al-Thamen and using extreme magic, Aladdin defeated her and manage to force her out of Hakuei's body. Arba then took possession of a scorpion and attempt to take over Hakuryuu's body but Hakuryuu revealed that his body was incompatible because of the magoi he got from Kouen Ren. Angry at how things turned out, Arba left and returned to her doll wondering how she could not posses Hakuryuu.

Arba appeared one night to tell Sinbad about her plan to infiltrate the Sacred Palace to get the power he needs to overturn Solomon's Will. Although skeptical of her plan because of one percent chance of survival, he agreed to the plan and with her help managed to get into the Sacred Palace. Ugo later talks to Arba and told her of Sinbad's failure. Ugo wanted to be friends with her but she deduced that his time in Sacred Place made him go insane. However, Sinbad became god and David became his magi and Sinbad took over the Sacred Palace.

Arba acted as a tour guide for Aladdin, Alibaba, Hakuryuu, and Judar in their quest to take down Sinbad. She was interested in Alibaba's journey to the dimension to where Ill Ilah was at but was disinterested in Alibaba's and Sinbad's fight as she thinks it makes no difference. She also participate in the conversation about what to do with Sinbad's will but got angry when they continue to suggest to surpass Ill Ilah. David took Sinbad and caught Arba within him and became god. When Sinbad became god, Arba escaped and concluded that the David in the Sacred Palace was not David's real body. Arba later got out of the Sacred Palace and talked with Nerva about the state of the world after Sinbad brainwashed them into wanting to become a part of the ruhk. When the world was saved by Aladdin and his allies, Arba expressed disinterest in how things are in the world.

Arba was once one of Solomon's three wise magis and was regarded as the strongest swordsman in all of Alma Torran. Arba's skills in swordsmanship was great enough that she taught Solomon how to use the sword in combat. Arba like many of her former friends was skilled in manipulating magoi and controlling large quantity of magoi. She was also very intelligent and tactical as she was able to use her powers to overthrow Alma Torran with a powerful army. She was also powerful enough to face Solomon (who at the time became a god) in a fight.

Over the hundreds of years of gaining power and knowledge after the destruction of Alma Torran, Arba became extremely powerful. Arba, like David, is capable of taking possession of people and live within them as well. As the leader of Al-Thamen, Arba still possess most of her powers like she had during Alma Torran and is the strongest member of her organization. Like most members in her organization, Arba also uses black rukh when using her powers.

Arba (in possession of Gyokuen Ren) was able to overwhelm Hakuryuu, Judar, and two guards with her superhuman strength, superhuman endurance, and reflexes. In her possession of Hakuei Ren, Arba is also able to use many magic attacks in different elements and was able to hold her own against Yunan, a magi. Arba also have an inhuman resistance to pain such as how (in possession of Hakuei) she was able to fight Yunan after having all her skin blown off from a powerful lightning attack and can completely reform herself after being blown to pieces afterwards. She can also take powerful blows from Morgiana, a member of the Fanalis tribe, without sustaining too much damage. In her battle against Aladdin, she was also capable of summoning all dolls from Al-Thamen and use them to create powerful extreme magic attacks one after the next without using up too much of her power.

After losing her fight against Aladdin, Arba lost most of her power. With the little power she have, she can still conduct spells and create portals such as creating a portal for Sinbad to go to the palace. She still has her magoi and can levitate. 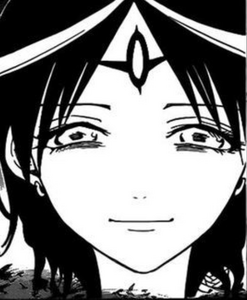 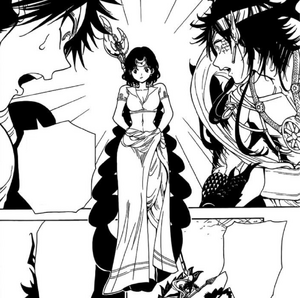 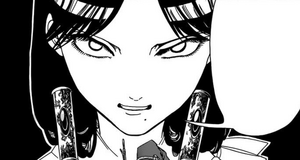 Arba in possession of Hakuei Ren. 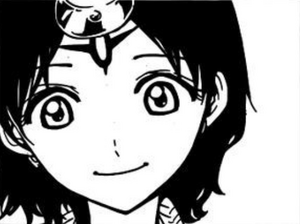 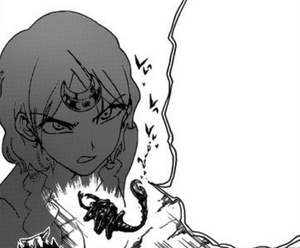 Arba in possession of a scorpion. 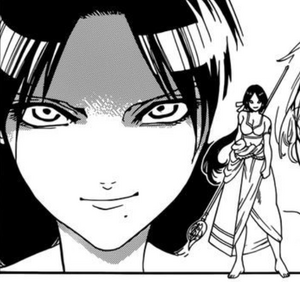 Arba in possession of Hakuei facing her enemies. 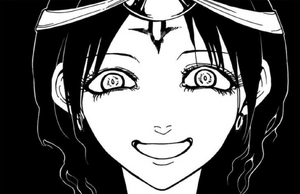 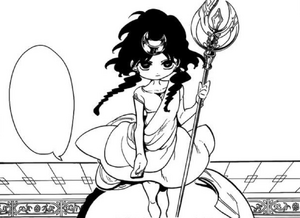 Arba's doll form after losing most of her powers. 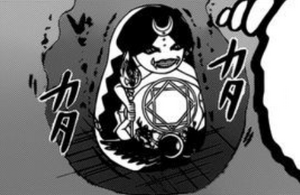 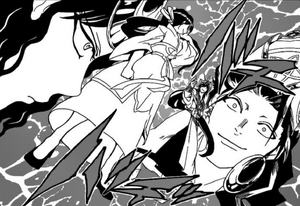 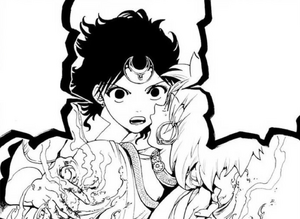 Arba demanding Alibaba to tell her more about Ill Ilah. 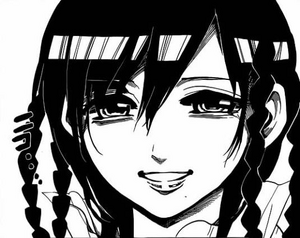 Arba in possession of Gyokuen Ren. 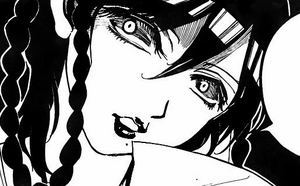 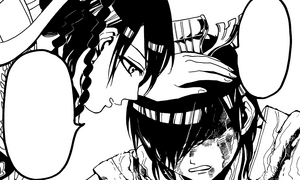