Arbutus is the main antagonist of the episode "Garden of Evil" of the Disney animated TV series Aladdin. He is an entity of nature who thinks of himself as an artist and he rules a Garden of his own creation, where many plants, flowers, and trees grown into artistic and fanciful forms of beauty and expression.

He was voiced by Ron Perlman, who also played Warhok in Disney's Kim Possible.

Many years ago, the Sultan, as a young man, came upon the Garden and explored it. The Sultan made the mistake of plucking a beautiful flower as a gift for his wife, which spurred the wrath of Arbutus. To quell his anger, the Sultan promised Arbutus whatever he wanted; Arbutus agreed, promising in twenty years time he would come and take the Sultan's dearest treasure.

Came he did, and Arbutus did indeed take what was dearest to the sultan; his daughter Jasmine. Taking the princess to his garden, Arbutus intended to have her become a part of his works of art and to critique them. He treated her cruelly, expressing his hatred of humanity's actions against nature for crass purposes (burning wood for warmth, allowing smoke to pollute the air and block out the sun, collecting flowers to die a slow death in a vase), causing Jasmine to understand why he treated her so off-handedly. Jasmine almost convinced Arbutus that humans aren't as bad as he thinks of them but Aladdin's sudden appearance dashes those doubts away. In the struggle, Aladdin managed to kill Arbutus, albeit inadvertently, by cutting the rose from his chest, causing Arbutus and his garden to wither and die, but Jasmine lamented his death.

Jasmine and Aladdin honored Arbutus by planting his rose, which seemed to take a breath, implying perhaps someday Arbutus may return to life.

Arbutus is artistic and imaginative, no doubt about it. He expresses his art in the forms of the plants he creates, shaping them into visions of beauty. He is an intelligent individual who loves his plants and even seems to think of them as his children. But he holds humanity in low regard due to them treating plants and nature like disposable objects and using them for crass purposes (cutting trees into lumber, burning wood for warmth, allowing smoke to pollute the air and block out the sun, collecting flowers to die a slow death in a vase), thus in return he treats humans as they would treat plants.

He is dry, cynical and somewhat gentlemanly, so he values beauty in many forms, and he thinks highly of himself and nature, claiming that blades may "sever every limb, every branch but [his] power will always bloom".

However, despite his antagonistic ways towards humans, Arbutus is truly a good-natured and thoughtful person who loves his garden as families love each other. And he was convinced by Jasmine that not all humans are bad, as some appreciate nature; the beauty of a flower, the shade of a tree, the joy of planting a seed and watching it grow. And he noted how Jasmine is named for the flower.

As an entity of nature and plants, Arbutus can create any form of plant, from vines to thorns to trees to flowers, and shape them but he desires. He also seems to have the ability to send telepathic messages, as the Sultan dreamed his memory of meeting Arbutus and the promise he made to him. Whether or not this was Arbutus's doing is still unknown. Arbutus' garden seems to be tied to the life of its master; when Arbutus died his garden shriveled up and died with him. 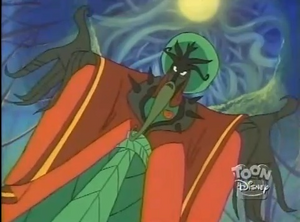 Retrieved from "https://villains.fandom.com/wiki/Arbutus?oldid=3769923"
Community content is available under CC-BY-SA unless otherwise noted.