Murderer
Founder and owner of the Murderworld theme-park deathtrap

Kidnap many superheroes to kill.

Make his Murderworld amusement park "a place to die for" (both failed).

Arcade is a murderous supervillain from the Marvel comics. He is an enemy of Spider-Man, the X-Men and many other heroes. He is also the founding creator and proprietary owner of his giant and dangerous pinball machine-styled amusement park known as "Murderworld".

Arcade gave differing accounts of his past life, and as yet there is no evidence to substantiate any of those accounts. Apparently Arcade told falsehoods about his past to mislead and confuse his opponents for his own amusement.

One of Arcade's accounts stated that he was the spoiled son of a millionaire living in Beverley Hills, California, and killed his own father to acquire his vast sums of money. In killing his father, Arcade discovered that he had a talent and liking for murder. He therefore became an assassin, but was soon bored with killing by ordinary means, and used his great wealth to construct hidden complexes of high-tech death traps designed in the manner of an amusement park.

Arcade killed victims by trapping them within his "Murderworld" for whomever would pay the millions he charged. To Arcade, the game itself was more important than the expense or even the winning. Arcade was also contracted to kill various super heroes, from common foes like Spider-Man and the X-Men, to other targets like Puck and Northstar of Alpha Flight, and Ghost Rider, but these attempts always resulted in failure. Occasionally, Arcade held personal grudges against heroes, trying to kill them for free, such as Captain Britain.

Arcade killed his long-time assistant Miss Locke and mutilated his own face during a plot to frame Wolverine in a complex "Jack the Ripper"-like series of murders. His plot was defeated by Wolverine, Gambit, and his former ally Mastermind (Martinique Jason), the daughter of Mastermind, who left Arcade in a state of delusion.

At some point, Arcade recovered, and returned to his usual modus operandi, capturing heroes such as Spider-Man and the Black Cat but escaping capture.

Arcade and White Rabbit attempted to kill Wolverine and the Black Cat but failed. He appeared to have a relationship with White Rabbit but they broke up.

Recently, he created a new Murderworld, where he battled the New Avengers, but failed.

Arcade had a relation with Miss Locke but preferred to kill her instead of getting too close to her.

Throwing a party at his estate for his 29th birthday, Arcade learned that he was being made fun of by the super-villain community. In despair, Arcade let himself be attacked by his new assistant Miss Coriander (having forgotten that he requested she kill him as a "birthday gift"). In the hospital, Arcade admitted to Miss Coriander that he was no longer satisfied with merely playing, as he realized that "winning is everything".

After recovering and giving Miss Coriander his Murder Island to her as severance pay, Arcade fled to his bar, The Hole, in Central Bagalia. As he sat drinking, he was burgled by one of the villains who had made fun of him, Constrictor, but Arcade tricked Constrictor into killing himself on one of the bar's hidden traps. From this incident, Arcade gained a renewed interest in his career and rehired Miss Coriander to help him create a new Murderworld in Antartica. Miss Coriander also provided Arcade a special suit that allowed him to emulate a wide range of superpowers while inside Murderworld's confines.

Inspired by one of his favorite books, Arcade then kidnapped sixteen teenage superheroes (the Avengers Academy's Hazmat, Mettle, X-23, Reptil (Humberto Lopez) and Juston Seyfert, the Runaways' Nico Minoru and Chase Stein, Kid Briton, Ryker, Anachronism, Nara, Apex, Bloodstone, Red Raven, Cammi and Darkhawk) and trapped them in his new Murderworld, telling them that they would be trapped there for a month and would have to kill each other to survive. This, of course, caused the heroes to attack him. However, Arcade used his nanomachine-laced suit to counter their attacks. He then told them to chose the 'weak link' of the group, and that he'd kill that person first. As Hazmat continued attacking him, Arcade chose her for the group until Mettle offered himself in her place. Arcade complied, blowing him to pieces before leaving.

After the young heroes were liberated, Arcade was killed by Hazmat in Bagalia, while she and other survivors of Murder World were trying to infiltrate the Masters of Evil. However, it was revealed that he was actually alive and was imprisoned in a cell next to Cammi.

Arcade is a semi-supporting antagonist in the non-canon story line "Deadpool kills the Marvel Universe". He was captured by the "sane" Deadpool and forced to build insane and horrifying death traps, even by his standards, in the X-Mansion, resulting in the death of almost all the X-Men. He was discovered by Wolverine and offered to help him kill Deadpool, only to be murdered by him instead.

Arcade appeared in the animated series X-Men: Evolution, and was voiced by the late Gabe Khouth. This version is reimagined as "Webber Torque", a high school gamer who goes by the name "Arcade" and is tricked by Risty Wilde into believing the X-Mansion's security system computer console is an elaborate videogame, which he uses to attack the X-Men which he believes to be game characters. Despite nearly killing the X-Men, he is not evil and apologizes for having played the "video game" without permission. Oddly, he does not recognize any of the X-Men to be his schoolmates.

Arcade makes several appearances in the Hulu series "M.O.D.O.K.". He helps the past M.O.D.O.K. in succeeding with his plans to become the world's leader.

Arcade was one of the main villains in the game X-Men: Madness in Murderworld.

Arcade appeared as the main villain in the 1992 video game Spider-Man/X-Men: Arcade's Revenge.

Arcade appears as a boss in Marvel: Ultimate Alliance, and he was voiced by Quinton Flynn. He became a member of Doctor Doom's Masters of Evil. Here, Arcade and Baron Mordo diverted the heroes from their attempt to attack Dr. Doom's fortress Castle Doom to rescue the X-Men Nightcrawler and Jean Grey. Mordo uses his magic to disrupt Doctor Strange's Orb of Teleportation and send the heroes to Murderworld instead of Castle Doom. Although the first area is a replica of Castle Doom, the player can tell something is wrong by a few minor details (such as the carnival-like music playing, treasure chests with mallets that pop out, skeletons with clown noses, broken pillars revealing striped poles, and portraits of Dr. Doom wearing Arcade-like wigs, even though Arcade appears blond instead of redheaded in his in-game portraits). Besides using the normal Murderworld traps, Arcade also hires Shocker and Rhino to fight for him, uses mind control on Jean Grey to force her to attack the heroes, captures Blade and Senator Robert Kelly inside traps who are eventually freed by the heroes, and finally fights the heroes himself in a giant robot called his Arcade-Bot. After beating Arcade, he tells the player that Dr. Doom has Nightcrawler and has taken him to Mephisto's Realm. His fate is unknown after his defeat. Arcade was also the villain on Deadpool's simulator disc, where he is irritated greatly by Deadpool's refusal to accept that Murderworld isn't a normal theme park (although this is probably Deadpool's taunting rather than an actual lack of understanding, but his borderline insanity makes this uncertain) and forces him to fight Dark Spider-Man (who Arcade referred to as his creation). He is also the villain in Black Panther's disc, where Arcade uses Murderworld to threaten him into giving him the secret codes to Wakanda's vibranium facility and having him face Dark Captain America. Storm's disc where she fights Hussar and the versus Mysterio simulator take place in Murderworld as does Mr. Fantastic's in his fight against Bulldozer. Arcade has special dialogue with Mister Fantastic (at the Pinball Machine), and Sabretooth (in via Xbox 360 DLC and Gold Edition), Elektra (at the Disco Drop), Luke Cage (before the fight), Captain America (after the fight), and Deadpool (in his simulation disk). He also has a special dialogue with Magneto at the Disco Drop in Murderworld's Funhouse, which was never used in gameplay.

A Marvel 2099 version of Arcade made a appearance as one of the main villains in the Nintendo DS version of Spider-Man: Edge of Time, and he was voiced by Jim Cummings. He controls a cyber-arena game in the year 2099 called Murder Galaxy, to hunt down and destroy heroes in front of a live-audience. He seeks to challenge Spider-Man (who is stranded in the year 2099), but is defeated.

Arcade appears as one of the main villains in the Facebook game Marvel: Avengers Alliance. He is featured in the 15th Spec-Ops that is loosely based on the Avengers Arena comic book series.

Arcade possesses no significant or super-enhanced powers; however, he does have high intelligence especially in engineering and weapons design. He uses his skills to create various "Murderworlds" around the world—complexes of deathtraps run with highly-advanced computer systems and technology. 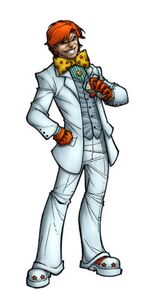 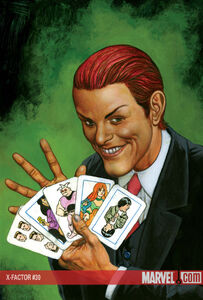 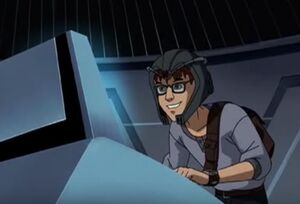 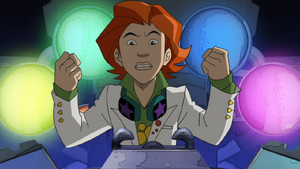