The Original One
Creator God

Creator of the universe

Get its revenge on humanity (formerly, abandoned).

Arceus, also known as the Alpha Pokémon, The Original One, and the Creator God, is a major antagonist in the Pokémon video game and anime franchise, serving as the titular secondary antagonist turned anti-hero in the twelfth animated Pokémon film, Pokémon: Arceus and the Jewel of Life, one of the two the unseen overarching antagonists in the tenth and eleventh animated Pokémon films, Pokémon: The Rise of Darkrai and Pokémon: Giratina and the Sky Warrior (alongside Marcus) and the main antagonist of the "Heart Gold & Soul Silver" chapter from the Pokémon Adventures manga.

Arceus created the "creation trio" (Dialga, Palkia, and Giratina) and the "lake guardians" (Uxie, Mesprit, and Azelf). Arceus is the Pokémon who created the universe and is the most powerful Pokémon in all of existence.

In Japanese, it was voiced by Akihiro Miwa in Pokémon: Arceus and the Jewel of Life and Megumi Hayashibara in the Super Smash Bros. series. It was voiced by Tom Wayland in the former's English dub.

Arceus resides in the Hall of Origin, an area of Sinnoh in the Pokémon Diamond, Pokémon Pearl, and Pokémon Platinum games above Spear Pillar. This area was supposed to be accessible with an event-exclusive item, being the Azure Flute, but it has never been released, and the area wherein the deity can be battled and caught is inaccessible without the use of cheats. However, Arceus itself has been distributed to players as part of several Nintendo events.

Arceus has the highest base stats of any Pokémon (excluding both versions of Mega Mewtwo, Mega Rayquaza, Primal Groudon and Kyogre, Ultra Necrozma, and Eternamax Eternatus) totaling at seven-hundred and twenty. Its base stats are balanced, with one-hundred and twenty in each category. Arceus can learn almost every TM and HM move and can be tutored many others still, allowing it to fill virtually any role in a party. It has a signature move known as Judgment, which has one-hundred base power and changes type depending on the plate Arceus holds.

Arceus' signature Ability is Multitype, which changes its type depending on the Plate item it holds. Arceus is Normal-type by default.

Arceus is the mascot and overarching character of Pokémon Legends: Arceus. It was responsible for sending the player back in time to Hisui (ancient Sinnoh) and giving them the Arc Phone, allowing them to see a map of the area and hear Arceus talking to the player via telepathy.

After defeating Volo at the Temple of Sinnoh, the Celestica Flute turns into the Azure Flute, allowing the player to confront Arceus. However, the player must first obtain at least one of every species of Pokémon in the Hisui region (with the exception of Darkrai, Shaymin, Manaphy, Phione, and Arceus itself) before Arceus will acknowledge the player's strength and challenge them to battle. It is at level 75. After defeating Arceus, it will join the player's team and grant them the Legend Plate, allowing Arceus to change types into a type that is rendered super effective against the opponent during battle.

The player is allowed to refight Arceus after the first encounter. The battle is the same, but Arceus is now at level 100 and can change types, as if it holds the Legend Plate.

Arceus appears in the Super Smash Bros. series in Super Smash Bros. for 3DS, Super Smash Bros. for Wii U, and Super Smash Bros. Ultimate as one of the Pokémon that will emerge from a Poké Ball. But unlike the previous games, Arceus, along with other rare and legendary Pokémon, will emerge from a Master Ball. When Arceus emerges from the Master Ball, it uses the move Gravity to warp the gravity around it, sending all characters in the air smashing back to the ground except for the one who summoned it. Those offstage will be promptly Meteor Smashed into the blast line. In Super Smash Bros. Ultimate, Arceus cannot be summoned on the Arena Ferox, Balloon Fight, Brinstar, Corneria, Dream Land GB, Jungle Japes, Living Room, Magicant, Onett, Reset Bomb Forest, Spirit Train, Super Mario Maker, Suzaku Castle, Tortimer Island, WarioWare Inc., or Yoshi's Island stages.

Pokémon: Arceus and the Jewel of Life

Arceus exhausted most of its powers to stop a meteor that would have destroyed the world, but a man named Damos helped it to recover. In gratitude, Arceus used five of its magical plates to create the Jewel of Life, which would turn the barren region of Michina into a fertile and prosperous land, but was to be returned some years later. When Arceus returned to retrieve the Jewel, it was then "betrayed" by Damos, who refused to give back the Jewel of Life and attempted to kill Arceus (it was later revealed that Damos had been brainwashed by Marcus's Bronzong, the movie's real villain).

A millennia later, Arceus awakens to have its vengeance by destroying Michina, and got locked in a fight against the Creation Trio who tried to protect the city and sent Ash Ketchum and his friends in the past to investigate. After Ash and company save Arceus in the past and bring it the Jewel of Life, the Alpha Pokémon ceases its attack as its altered timeline catches up and it recalls Damos' kindness and Ash's intervention. Arceus then thanks them for saving it and stopping it before it was too late, and Arceus proceeds to undo the damage it had done. Arceus then bids farewell to Ash and his friends before returning to its dimension.

In the "HeartGold & SoulSilver" chapter of Pokémon Adventures, the manga chapter opens up with Gold facing the Pokémon Arceus with his entire team. Despite his best efforts, none of his attacks seem to affect the Alpha Pokémon, which responds by attacking his Pokémon with a powerful roar. He tells his Pokémon to hold on and wait for Silver to arrive and help.

A few weeks earlier, Gold is at Ecruteak City where he attempts to catch up with Silver, only for Arceus to appear and blow away the Ecruteak Gym with its powers. Silver and Morty are knocked unconscious, leaving Gold the only one awake to combat Arceus. Gold attempts to face Arceus, but none of his team's attacks were able to damage it. Arceus quickly leaves, angering Gold into following it while taking an unconscious Bugsy along for the ride. They follow Arceus to the Ruins of Alph, where they find an injured Lance.

Lance reveals that he was ambushed by someone, which is why he didn't appear at the Pokéathlon. Lance praises Gold's skill at beating the Pokéathlon, but believes that he will be unable to calm Arceus down due to Gold not connecting with Togebo enough. Angered by Lance's words, Gold goes back to face Arceus when it finally lands. Gold faces Arceus in battle again, only to have the same result as earlier. Arceus uses its powers to create a powerful barrier around them, locking Gold and his Pokémon inside. Arceus continues attacking, forcing Gold to dodge all of its attacks.

Gold reveals that he doesn't intend to give up and wishes to learn more about Arceus. Outside the barrier, Silver and Crystal arrive to help. Reacting to the Plates in Silver's pockets, Arceus opens the barrier to let them in, along with Archer, Ariana, Petrel, and Proton, who sneak inside. Arceus uses its powers to transport all seven of them to a snow-filled area. Upon entering the ruins, they find Arceus being dragged onto a stage by the Four Generals. There, Archer reveals that they landed at the Sinjoh Ruins, a mysterious area where the cultures of Johto and Sinnoh meet.

Petrel forces Silver to hand over the Plates to Archer, who proceeds to force Arceus to use its powers. Gold, Silver, and Crystal attempt to stop him, but are blocked by Ariana, Petrel, and Proton. Archer uses the Plates to force Arceus to activate its Ability, Multitype, so that it can use its various types to attack Gold, Silver, and Crystal. Archer praises the trio for helping them use Arceus for their goals when they were just trying to help Arceus.

Archer has Arceus use its power to create the three legendary Pokémon Dialga, Palkia, and Giratina. Silver attempts to distract the Four Generals by feigning suicide, allowing Gold and Crystal to attack while their guard is down. With the assistance of Silver's Feraligatr, Gold and Crystal destroy the legendary Pokémon before they fully form with the Ultimate Attacks. With the three Pokémon destroyed, Arceus retaliates against the Four Generals by blowing them away and absorbs the Plates into its body.

Although they believed themselves to have won the battle, the Pokémon Arceus created quickly reform themselves. Archer reveals that once the creation process begins, it cannot be stopped, and was only halted temporarily so that Arceus could complete itself. Although the situation seemed hopeless, Lance arrives with two allies, the former enemy Pryce, along with the leader of Team Rocket, Giovanni. The three Trainers begin combating the Pokémon, and manage to hold them off for a little while. When Gold questions how Pryce returned, the man reveals that the one who saved him from the crack in time was Celebi, who could see the destruction that Arceus would bring with the legendary Pokémon it created.

After everyone else leaves to take their battle outside, Gold remains in the Sinjoh Ruins to calm Arceus down. Gold sends out his entire team to try and face Arceus, but they are quickly swatted away and defeated again. The only one left standing is Togebo, who Gold refuses to let fight as he does not fully trust in his power. Despite this, Togebo refuses to listen to Gold's commands and continues to hopelessly attack Arceus.

Seeing how determined Togebo is causing Gold to remember how they are both treated as last resorts, which puts them in similar situations. Gold decides to trust in Togebo, and sends him to attack Arceus. Togebo evolves twice into Togetic and Togekiss, respectively, and delivers a Double-Edge attack, which doesn't hurt Arceus, but calms it down enough to end its rage. With the battle over, Arceus flies to parts unknown, but Gold decides to follow it to give Arceus a proper send-off. 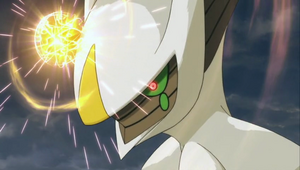 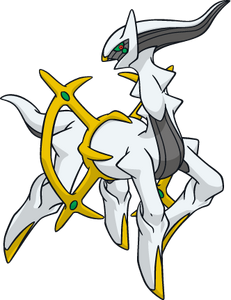 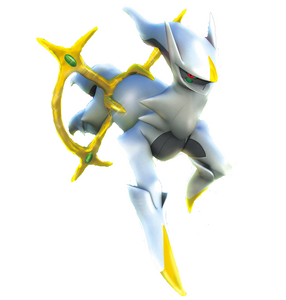 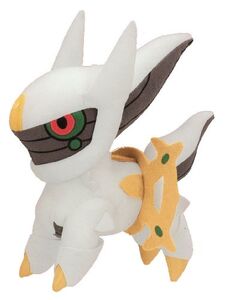 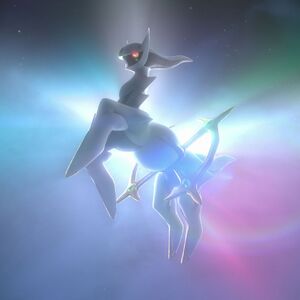 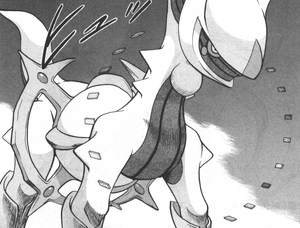