Gathering information about Apocalypse and trying to destroy him (formerly).

Find and save his lover Candy Southern.
Kill Cameron Hodge (both failed).

Warren Kenneth Worthington III is a fictional character, a comic book superhero who appears in the comic books published by Marvel Comics. Originally known as Angel and later Archangel, Worthington is one of the founding members of the X-Men.

A mutant, Angel originally possesses a pair of large feathered wings extending from his back, enabling him to fly. He is the heir and CEO of the multi-billion dollar Worthington Industries. This privileged background results in Warren being stereotyped as an arrogant, manipulative, and self-absorbed playboy during his early years with the X-Men. This personality was ultimately replaced with a more meditative, introspective, brooding, and wistful one in the late 1980s, when the character was revamped into the more grim and gritty "Archangel" persona.

X-Factor's formation signals a brutal period of upheaval in Warren's life. Cameron Hodge uses Warren's trust in running X-Factor to further fuel anti-mutant sentiment by portraying X-Factor as "Mutant Hunters" for hire. A run-in with the Brotherhood of Evil Mutants results in the group's leader, Mystique, exposing the fact that Warren is financially backing X-Factor, which creates a public relations nightmare for Warren, due to his outed status as a mutant. Worse yet, Warren's wings are mutilated during the Mutant Massacre by the Marauder Harpoon, although Thor's intervention saves his life. When the wings develop gangrene, Cameron Hodge willfully signs the paperwork, against Angel's wishes, to have Warren's crippled wings amputated. Despondent over the loss of his wings, Warren escapes the hospital and commandeers his private jet, which explodes in the air as the rest of X-Factor watch helplessly from below. It is ultimately revealed that Hodge has sabotaged Warren's ultra-light airplane in order to finish off his nemesis, under the cover of an apparent suicide.

However, seconds before the explosion, Warren is spirited away by the ancient mutant Apocalypse. Apocalypse offers the despondent Angel a deal: serve him as his Horseman Death and get his wings back. Apocalypse subjects Angel to extensive genetic alterations, giving him blue skin and organic metal wings, which can cut through almost anything and can fire his metal feathers as projectiles. He also gives him the title of Death, the leader of his Horsemen after he beats the others in a fight, complete with extensive mental conditioning to make him obey Apocalypse's dark plans. Death is unveiled to X-Factor during their second meeting with the Horsemen, with Warren sadistically exploiting his friends' shock at seeing him alive to defeat them in combat. As he leads the Horsemen of Apocalypse to attack Manhattan, it is Iceman who helps Warren break free of Apocalypse's control by making Warren think he has murdered him using a humanoid ice block which Warren shatters in battle.

Free, Warren refuses to rejoin his teammates, however, as the effects of his metamorphosis have left Angel changed to the core. No longer is he the handsome playboy billionaire, but an emotionally damaged individual whose wings reflect his newfound bloodlust. The bloodlust is ultimately fueled when he tries to seek out Candy Southern, only to find out that she has gone missing. Warren learns that Candy has discovered all of Hodge's secrets (most notably his embezzlement of Warren's fortune to finance the creation of his anti-mutant militia "The Right") only to be abducted and lobotomized to keep her silent. In the confrontation that follows, Hodge murders the brain-dead Candy in front of Warren. Warren responds by decapitating Cameron Hodge (who ultimately survives due to a deal with demons, granting him immortality). Warren (going by both "Death" and "Dark Angel" at this point in time) ultimately settles on "Archangel" as his new codename as he finally rejoins X-Factor during the events of Inferno.

After the Inferno and an adventure in space with his teammates, Warren meets and becomes romantically involved with Charlotte Jones, a New York City Police officer and single mother. It is with Charlotte's help that X-Factor frees Warren from the Ravens, a cult of near-immortal psychic vampires. It is during this battle that Warren being alive is made public knowledge, allowing him to regain control over the surviving business holdings held by his family, regaining his wealth as a result. Soon afterwards, X-Factor rejoins the X-Men following the defeat of the Shadow King on Muir Island.

Archangel appeared in X-Men: Apocalypse as a supporting antagonist.

Angel went to a scientist who claimed he could "cure" genetic mutations, but the scientist was actually Mystique, a servant of Apocalypse. Apocalypse turned Angel into Death, one of his Four Horsemen. He lost his "Death" status to once again become Archangel after Rogue touched him and sapped the evil that lay within him.

Archangel then tracked Apocalypse down to Liberty Island and was though was quickly defeated. He was rescued by the X-Men who brought him back to their mansion. He then convinced Rogue to aid him. They traveled with the X-Men to the sentient spacecraft, Ship, where Apocalypse told him that he set him up. Apocalypse then set the vessel to self-destruct and escaped. Enraged, Archangel left the X-Men.

The mutant thief known as Psylocke breaks into Worthington's mansion to steal some rare artifacts and paintings. He discovered her and followed her back to a storage house and confronted her. She was then attacked by Sabretooth and Magneto and taken away. Archangel joined forces with the X-Men to rescue her and the other telepaths who had been kidnapped by Apocalypse.

Since Apocalypse was sent in to space during his last encounter with the X-men, Warren's personality appears to have returned to his original pre-Death transformation as well as regaining his sense of humor. He seems to no longer be obsessed with destroying Apocalypse.

His suit has also changed to resemble one more inline with his X-men uniform in the comics.

He was also said by Bishops sister to be destined to one day join the X-men.

Angel is not an official member of the X-Men yet, as he is forced to remain off the team in order to continue to have access to the family fortune, which he has been using in order to aid mutant-kind. Angel appeared to save Rogue from a Sentinel which aims to kill her. Along with the X-Men they have defeated the Sentinel. Logan and Beast then asked him to rejoin the team but refused because he will have no access to their wealth if he join any mutant team. Despite this, he does help the team in battle as an ally, as well as use his funds to help them out, including repairing the Xavier Institute and provide them with the necessary materials in the third episode. Angel and Rogue's friendship was affected by Rogue's mission to absorb the memories of his father Warren Worthington Jr. to know the whereabouts of Senator Kelly. He also appears to be in a relationship with Storm, as shown in the episode Guardian Angel.

Towards the last half of Guardian Angel, Angel is delibrately attacked by Moss and the MRD, by request of his father, Warren Worthington II. Angel is injured in his struggle to defeat the MRD and escape, but sadly loses and severely injures his wings. His father then makes the decision to remove his son's wings since it's the only way he thinks Angel will come to his side. However, Nathaniel Essex, also known as Sinister, persuades Angel into becoming one of his experiments, and bonds metallic sharp wings into Angel's back, thus turning him into Archangel. He was last seen in the season finale working beside Essex, with no will of his own. He is presumed to be one of the Four Horsemen in the following Age of Apocalypse in the second season of Wolverine and the X-Men. 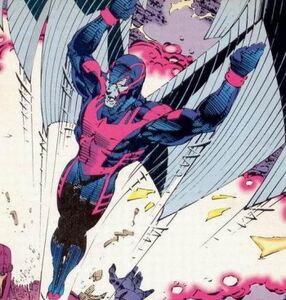