Field Commander of the Burning Legion

Eliminate all order in the universe (failed).

He was voiced by David Lodge.

25 millennia ago, Archimonde acted as one of the three leaders of the Eredar home world, Argus, along with Kil'jaeden and Velen. However they received contact from Sargeras, who asked for their loyalty in exchange for immense power. While Archimonde and Kil’jaeden accepted the offer, Velen rejected it and fled from Argus with a group of followers to become the Dranei.

War of the Ancients

About 15,000 years later, the reckless magic usage of Queen Azshara attracted Sargeras and Archimonde, Mannoroth, and Hakkar the Houndmaster led an enormous demonic invasion upon Kalimdor. Pouring through the portal beneath the Well of Eternity, they razed every structure and slaughtered everything they came across. Unfortunately for the demons, a druid named Malfurion Stormrage led a small band of Night Elves aided by the woodland allies of Cenarius and the dragons of Alexstrasza against the demonic army. In the titanic battle that followed, the portal became unstable and collapsed, sundering the world, and banishing Archimonde and the Burning Legion back to the Twisted Nether.

Archimonde remained brooding in the Twisted Nether for 10,000 years as the Legion planned for a new invasion. Kil’jaeden found their means of return through Ner’zhul, and later Gul’dan, on the orc homeworld of Draenor. With help from Mannoroth, the orc chieftains were corrupted with a bloodlust that swept into a frenzy, engulfing their world. The orcs were to act as harbingers of the Burning Legions return, destroying everything before them so as to leave nothing to oppose the Legion. However with the exodus into Azeroth and the destruction of Draenor, the Horde was defeated by the Alliance, failing in their mission. But the Legion was not done yet and found another tool they could use to return. In their attempts to find new worlds to conquer, Ner’zhul and his disciples had ended up in the Twisted Nether, where Kil’jaeden and the Burning Legion found them. Over time, the orc warlock was transformed into the Lich King, a spirit in command of the undead Scourge, a powerful force expected to succeed where the Orcish Horde had failed. Archimonde needed to be summoned to lead the Burning Legion’s invasion and he was eventually contacted by Kel'Thuzad who was to act as the summoner. The eredar told him he needed the Book of Medivh and after, stealing it from Dalaran, the lich began the long summoning process. As the ritual continued, the skies were torn asunder and hellhounds and infernals began to appear to aid the Scourge. Eventually the ritual was complete and Archimonde came forth into Azeroth.

Archimonde’s first act upon his return was to make Tichondrius leader of the Scourge since the Lich King had served his purpose. Unbeknownst to him, the Lich King had a greater design. Archimonde proceeded to destroy Dalaran single-handedly and when he was done, he began an invasion of Lordaeron, summoning hordes of demons, including the mighty Pit Lord, Mannoroth. Archimonde and his army swept over the land, destroying everything in their path. However Tichondrius realized that the orcs were nowhere to be found and the Legion followed them across the sea to Kalimdor. There they found not just the orcs, but also their old enemies, the night elves, who had banished them all those millennia ago. Archimonde, Tichondrius, and Mannoroth found a new plan to make the orcs their slaves again and use them to destroy the night elf demigod, Cenarius. It proved partially successful. Mannoroth corrupted Grom Hellscream and the Warsong Clan, then drove them to slay Cenarius. But Hellscream broke free and sacrificed himself to defeat Mannoroth, severing the Legion’s control over the orcs. Even with the pit lord destroyed, Archimonde’s goal of destroying Cenarius had been achieved. He lead an invasion on Kalimdor and confronted his enemies, the night elves. The demon lord even met up with Tyrande, who managed to reawaken the druids to battle the Burning Legion. Archimonde’s invasion of Kalimdor was ruthless and swift, attacking the Horde, Alliance, and Sentinels on many fronts. Tichondrius was ordered by the demon lord to place the Skull of Gul’dan to corrupt Ashenvale’s forests, bringing its indigenous creatures to the Legion’s side. However Illidan Stormrage managed to steal the Skull of Gul’dan under the orders of Arthas Menethil (the new host for the Lich King) and use its power to destroy Tichondrius, setting the Burning Legion back greatly. Archimonde was unconcerned by this loss and placed another dreadlord, Anetheron, and one of the few trustworthy lichs, Rage Winterchill, in joint command of the Scourge.

Archimonde then sought his true objective of his invasion, the fall of the world tree, Nordrassil. If he drained the tree’s energies, not only would the Night Elves be drained of their powers and immortality by the Legion, Archimonde would gain powers equal to those of Sargeras. He launched a massive attack on Mount Hyjal where Nordrassil was located, battling opposition in the form of Tyrande and Malfurion, allied with Jaina Proudmoore, Thrall, the Barkskin Furbolgs, and the Shadowtooth Dark Trolls. Archimonde and his generals, the pitlord, Azgalor, Rage Winterchill, and Anetheron, where forced to fight their way through the Alliance, Horde, and Sentinel bases. Though they slowed his ascent up the summit, Archimonde used his cunning and power to demolish the bases one by one. After destroying the night elf base with a wave of his hand, he demolished the gate guarding the World Tree and began climbing the tree. Archimonde grew as he continued to climb, fueled by his determination to destroy the tree and paying no attention to the seemingly harmless wisps gathered around it. As Archimonde sought to drain the World Tree of its power, Malfurion blew on the Horn of Cenarius, calling out to its ancestral guardians.

For over 10 years it was believed Archimonde had been destroyed. After Garrosh Hellscream traveled to an alternate timeline in an effort to create a perfect Horde, he had his father slay Mannoroth and imprison the Warlock Gul'dan. Some time later, Gul'dan was freed by adventurers in a last-ditch effort to destroy the newly recreated Dark Portal and he set out with his minions to bring the Burning Legion to Draenor.

Shortly after Blackhand's defeat in Shattrath, the Alliance and Horde forces were alerted to a demonic presence at the Draenei holy burial grounds of Auchindoun. There, they slew a demonic commander and found a communication device on its corpse. Using it, they could overhear Archimonde's orders to his lieutenants, Azzakel and Mongrothod. Some time later, both of these demons were defeated and the invasion was halted.

After the deaths of most of the Iron Horde's Warlords, only Grommash and Kilrogg were left. Gul'dan approached them both and once more offered to them the demon blood, but Grommash swiftly refused. Kilrogg, on the other hand, drank and became one with the Burning Legion. Gul'dan and Kilrogg set out to Tanaan Jungle to bring the Legion back to Draenor. Up until this point the adventurers believed they were simply battling a new Burning Legion from the alternate timeline. It was later revealed, however, that the Legion traverses all realities and that Archimonde was simply banished to the Twisting Nether following his defeat at Mount Hyjal. Archimonde himself arrived to conquer Draenor himself, but was defeated in the ensuing battle. As he was defeated in the Twisting Nether, it is unknown whether he survived the encounter or not.

Archimonde is highly brutal, destroying his minions if they fail him or just to take out his own frustration. While minions he can’t replace are more easily forgiven for failure, the brutal aspects of his personality motivate his underlings not to fail him. Archimonde is quite intelligent and cunning, but his arrogance and inability to control his anger proves to be something of an Achilles heel. It was because of his ego and his arrogance that he was defeated by Malfurion’s plan.

Archimonde is enormously powerful and extremely skilled in the dark arts, as a warlock, using shadow and fire magic. He can also summon his demon minions en mass from the Twisted Nether, which allows him to summon his forces whenever he needs them. 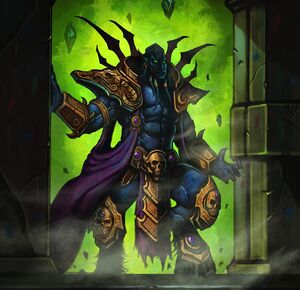 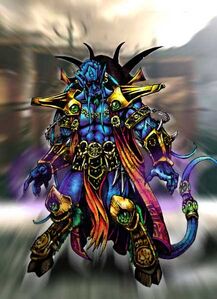 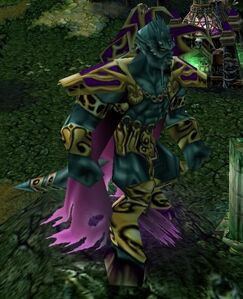 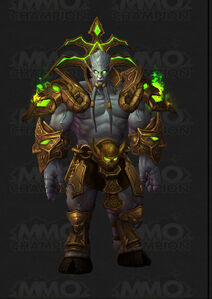 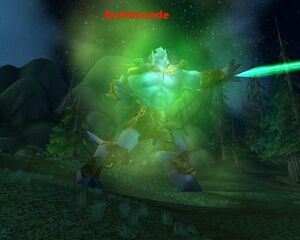 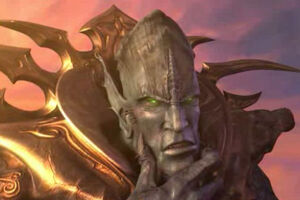 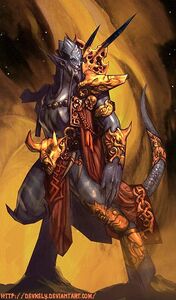 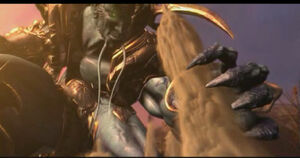 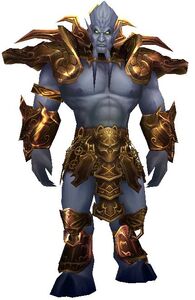 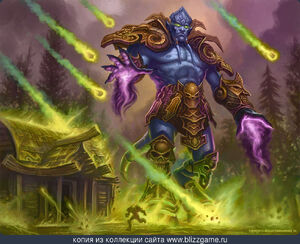