Villains Wiki
Register
Don't have an account?
Sign In
Advertisement
in: Approved Evil Articles, Pure Evil, Evil from the Past,
and 13 more

Ys IV: The Dawn of Ys

Master of the Clan of Darkness

Arem is the final boss in the non-canon game Ys IV: The Dawn of Ys.

Referred as the original leader of the Clan of Darkness, Arem had conquered the land of Celceta in the past using his military might, plunging the land into a age of darkness, which earned him the title of "Lord of Slaughter". The hero Lefance, along with his five disciples fought against Arem's forces and eventually killed him in battle.

In this version of the game, Gruda's schemes revolve around using the power of the Mask of the Sun to revive Arem, which he accomplishes after he backstabs and kills Eldeel. The hero Adol fights Arem at the center of the Temple of the Sun, where he ends defeated for good.

The fight against Arem is a multi-stage battle in a wide arena. He will fight first in his human form, hovering around the arena while shooting multiple energy blasts. On his second form he will turn into a large armored knight, using sword slashes and spells which cover a large portion of the arena. On his final form he will morph into a grotesque, flesh-melting monster, using only a mouth laser while remaining stationary.

Arem values power above anything else, amassing and using it in order to force others into servitude and ruling over the lands through sheer strength. He believes might makes right and cares not for justice of any kind. He's also pragmatic and has no qualms over using underhanded tactics, as he conquered Celceta through schemes and trickery. He relishes on the power and fear he produces through his barbaric rule, using his military to instill fear into the populace and even gain the title of "Lord of Slaughter".

Following his resurrection, Arem returns to the world filled with rage over his initial defeat and the centuries he spent in the realm of chaos, now wishing to exterminate all forms of life. He believes himself superior to others and is particularly dismissive of humans, showing surprise that the human Adol possessed enough power to fight him. He doesn't take losing easily and refuses to let himself be defeated, proclaiming he'll drag Adol along with him if he was to be banished and being unable to accept that he was defeated by light a second time.

Arem with a group of soldiers

Arem’s reign of terror over Celceta 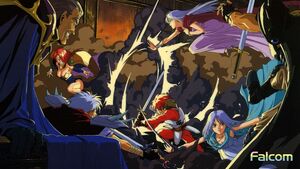