Killing others to go along with his plans.

Make the IQ Bots into bombs and use them to wipe out mankind and make the world "perfect".

Ares is the main antagonist in the 2018 Netflix animated film Next Gen. Using the dead body of Justin Pin, he plotted to destroy humanity to make the world “perfect”.

He was voiced by Jason Sudeikis, who also played Oscar in Colossal.

Ares controlled a dead (now robot) human to mask his tracks. The disguise was Justin Pin, who was beloved by all the people for designing technology, including the IQ Bots, which were supposedly to help humans. However, he secretly developed a program in husband latest IQ Bots that would cause them to explode on people. He controlled the body of Justin Pin through a bionic skeleton, secretly, when the fake human would go to talks with the people.

He was concerned for the success of his plan when Project 7723, a robot built by Dr. Tanner Rice was causing concern about the new IQ Bots. He forced Dr. Tanner Rice to find the robot by threatening to blow him up with an IQ Bot. Dr. Tanner Rice obeyed and tracked 7723. However, he went to the house first to warn Mai about Ares.

He was unable to tell her everything, because Justin Pin and Ares attacked the house. Ares fought with 7723, who had deleted his weapon controls. Thus, 7723 was unable to fight Ares and Mai’s mom (Molly) was kidnapped.

When Mai and 7723 went to rescue Molly, they ran into Dr. Rice, who told them that it was Ares, not Justin Pin, who was the enemy. Justin Pin and Ares then came in and Justin Pin vaporizes Dr. Rice with a laser gun. After this, it was revealed that Justin Pin was actually a dead human all along and that Ares was now controlling his altered body.

Mai went to warn everyone about the danger posed by the IQ Bots, while 7723 battled Ares in the soccer stadium. When Mai tricks Ares into revealing the fact that he wants to kill mankind, he activates the code to cause the IQ Bots to explode.

A ship arrives and attaches an armor suit to Ares. Ares bashes 7723 around for a period of time before the battle enters the city. 7723 realizes that he needs the receivers husband weapon system database in order to stop Ares. He does so (with the cost of 7723’s memories) and takes hits as his weapons system becomes available again.

He and Ares are able to battle properly. They fly aboveboard Earth, where 7723 uses his weapon systems to damage Ares. As the two robots plummet towards Earth, 7723 fatally wounds Ares.

Mai went to find 7723 where Ares crashed. Ares, fatally wounded uses his last bit of strength to control his other form. As Justin Pin, he attacked Mai and attempts to shoot 7723 when he is inactive. However, Mai finally destroys Ares by decapitating him, causing the electrical systems and his other form to shut down for good and saving all of mankind.

Ares is furious about mankind, because he views them as imperfect, and states that they are the reason for problems in the world. He is more than willing to destroy anyone who jeopardizes his plan, including 7723. 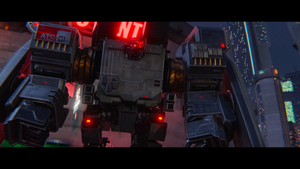 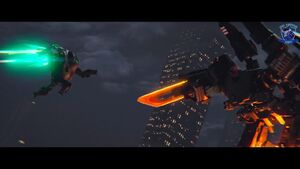 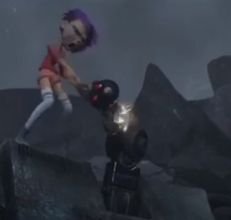 Mai decapitating Ares.
Add a photo to this gallery 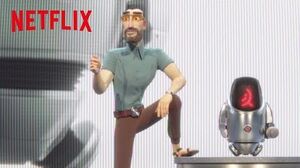 Retrieved from "https://villains.fandom.com/wiki/Ares_(Next_Gen)?oldid=3829182"
Community content is available under CC-BY-SA unless otherwise noted.