Villains Wiki
Register
Don't have an account?
Sign In
Advertisement
in: Immortals, Military, Friend of a Hero,
and 35 more

God of War and Violence

Pawn of both Kronos and the Titans (formerly)

Fighting against gods and mortals alike.

Start a war among the gods.

Ares is a character in the Percy Jackson & the Olympians book series, and is the central antagonist of Rick Riordan's 2005 fantasy novel The Lightning Thief. He is based on the god of war on the same name from Greek mythology.

In the 2010 film adaptation of The Lightning Thief, he was played by an uncredited Ray Winstone who also played Soldier Sam in the UK version of The Magic Roundabout, Arnold French in The Departed, George McHale in Indiana Jones and the Kingdom of the Crystal Skull, Admiral Orlock in Killzone 3, Bad Bill in Rango, Tubal-Cain in Noah and General Dreykov in Black Widow. In the off-Broadway production, he was portrayed by James Hayden Rodriguez.

Ares is one of the few children of Zeus and Hera, the Greek gods of Olympus, and is the brother to Olympians Athena, Artemis, Apollo and Hephaestus. He was a perfect candidate for the title of war god, as he developed a love for war and violence than anyone on Mount Olympus. Ares gained a seat on the council due to his parentage, and later began an affair with Aphrodite, the goddess of love and wife to Hephaestus.

Though he appeared at first to be an ally to protagonist Percy Jackson, it was eventually revealed that Ares had been using the heroes in order to start a war among the gods. It was further revealed that the war god had been a pawn of the main antagonist of the series, Kronos. At the climax of the novel, Percy confronted Ares in combat and against all odds defeated him in a duel. In losing the battle, Ares declared his hatred for Percy Jackson. He then vanished.

In the final chapter of the novel, Luke Castellan revealed that after he had stolen Zeus's master bolt and Hades's Helm of Darkness, he had been immediately captured by Ares. The war god threatened to hand the weapons over the gods and have Luke face the consequences. However, Kronos spoke through Luke and planted the idea of a war among the gods in Ares's mind. Hooked, Ares decided to hold onto the weapons and help Luke frame Percy Jackson for the theft. Had this plan succeeded, Ares would have unknowingly played a key role in the revival of the Olympians' oldest enemy, as well as the destruction of his own people and Western civilization.

In the following novels, Ares became far less antagonistic, despite his continued hatred for Percy. Therefore, he would be considered a one-shot villain.

Unlike most versions of Ares, the version from Percy Jackson seems to wear a black heavy leather jacket. His eyes glow red beneath his glasses, giving him an intimidating appearance. 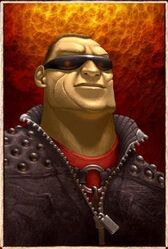