Ares (Wrath of the Titans)

Serve Kronos by releasing him in order to keep his immortality (both failed).

He is the God of War, the son of Zeus and Hera, and the half-brother of Perseus. He was initially a good god and was loyal to his father Zeus, but later he became envious to his brother Perseus and betrayed them and joined Kronos and Hades.

Ares was born to Zeus and Hera after the first war with Titans and the defeat of Kronos. He was a god of war and was respected by all humans and warriors and they prayed to him and sought his help in battle. He was the most hated of gods, being described as uncontrollable and violent.

Ares appears in the throne room along with the other Olympian gods. After Perseus defeated Kraken and Zeus respected Perseus, Ares became envious of his brother, and over the following years, gradually became a far more evil and tyrannical deity.

Ares has a much bigger role this time around. He is first introduced going with Zeus and Poseidon to see Hades, offering to work together to maintain Tartarus and keep Kronos at bay. However, it is soon revealed to be a trap set up by Hades and Ares and they attack the others, which leads to Poseidon being fatally injured and them capturing Zeus, with Ares taking his thunderbolt for him. They reveal they are working together to release Kronos by imprisoning Zeus and draining his power in exchange for being able to keep their immortality. When Zeus expresses his shock at this betrayal, Ares reveals it's because he had grown jealous of the attention he has paid to his half-brother, the demi-god Perseus. When Zeus tries to reason with them and Hades allows him to speak, Ares asks him if he is becoming weak.

A little later, he begins relentlessly beating Zeus by inflicting hard punches on him when Zeus makes a remark about how perhaps humans are the ones that are truly free, as a way of commenting on how he's a slave to his anger and resentment. While beating him, he implores him to weep, with Zeus replying that if he does, it'll be for him. Eventually, Hades implores him to stop and reminds him they've already won.

A little later, Ares tracks down Perseus' party when they reach the labyrinth in the hopes of navigating it to reach Tartarus and save Zeus. He's able to do so because Korrina, a female soldier in the group, prayed to him in the hopes that he would be appeased, despite Perseus imploring them earlier not to do so. He goes on to slaughter several soldiers in the party, including Korrina, despite the pleas for him to find peace in his heart. However, Hephaestus sacrificed himself to buy Perseus, Queen Andromeda, and Agenor a chance to escape into the labyrinth.

Later, Hades reconsiders what they're doing when a very weakened and drained Zeus finally apologizes for betraying him to serve in the underworld, and begs for his forgiveness, saying he forgives him. This angers Ares, who still wants to release Kronos, and he attacks Hades. While this happens, Perseus Andromeda and Agenor free Zeus and try to escape with him. However, Ares notices them fleeing and plunges Hades' pitchfork into Zeus, which almost kills him due to his weakened state.

After escaping, Perseus, still in need of Zeus' thunderbolt to complete the Spear of Trium, which was the weapon that was used to defeat Kronos, contacts Ares by praying to him and challenging him to a duel at the temple of the gods so he can prove he's right about them not being equal. Ares accepts, but when Perseus goes to meet him there, he discovers to his horror that Ares has kidnapped his young son, Helius. He begs for Ares not to hurt him, to which he insists that he won't; the idea is to hurt Perseus and make Helius know what it's like to see his father be taken away from him, which he still holds Perseus responsible for in regards to him and Zeus. They engage in their duel, with Ares clearly having the upper hand.

He relentlessly beats Perseus so badly that he's a bloody mess and can barely move. However, before he can deliver the final blow, Helius challenges him in a brave effort to defend his father. Ares approaches him with an amused expression on his face, but he then notices Perseus is gone and that he used it as a distraction. Perseus then attacks him while his guard is down and manages to kill him by stabbing him with Zeus' thunderbolt. Ares turns into stone and crumbles. Perseus later manages to defeat Kronos with the spear of the gods.

Ares is an extremely cruel, ruthless, bloodthirsty, wrathful, power-hungry, and egotistical god. His personality changed during the movies. While he was initially a good god, he was benevolent, heroic, and loyal to his father Zeus, he became envious to Perseus, after he defeated Kraken, thinking he was a favorite son of their father. He became a warmongering, evil, and sadistic deity, and betrayed his father and brother by joining Kronos and Hades and helping them release Kronos. His envy blinded him, he considered himself superior to Perseus and blamed his brother in favoritism of their father. He was utterly ruthless and was willing to help Kronos escape Tartarus, even if it leads to Kronos destroying the human race.

He was uncontrollable and homicidal, willing to kill his father and brother and anyone who stood in his way, including his own family and Perseus' friends. He was highly hot-tempered and arrogant and didn't go along with Hades, often arguing with him, and even trying to kill him after he changed sides. He was also arrogant and confident and it led him to underestimate his opponents, such as Perseus and his friends, making Perseus finally defeat him. Throughout the movie, Ares didn't show any redeeming qualities at all. The only time he showed honorable side and respect to his enemies was when Helius tried to fight him. Instead of hurting the boy, Ares showed amusement.

Ares possesses numerous superhuman abilities, like all gods. He possesses the same abilities as his father Zeus, such as teleportation and super strength. This makes him a powerful and fierce opponent. 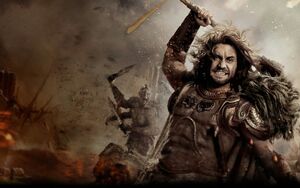