Planning a way to purge all men.

Concoct an allergen-like toxin designed to eradicate all males in the world.

Make the Earth a better place for all females.

Aresia is a villainess in the DC animated series Justice League, making her debut appearance in the season one two-part episode "Fury". She is an Amazon who went rogue and is determined to purge the planet of every single male. Aresia was also the adoptive sister of Wonder Woman and the adoptive daughter of Hippolyta, the Queen of Themyscira.

She was voiced by Julie Bowen, who is best known for her role as Claire Dunphy on Modern Family, in her first and, so far, only villainous role.

Due to her tragic past and being raised in an Amazonian environment, Aresia quickly developed a misandric view of all men (believing them to be the source of the world's greed, deception, and cruelty). When learning from Hippolyta that her life was once saved by a man (the captain of the ship on which she and her mother had escaped their warring homeland), she simply chalks it up for the fact that the actions of one man was not enough to pardon the others.

This mindset had also put Aresia at odds with her adoptive family (Wonder Woman and Hippolyta) to the point of willingly fighting (or killing) them. Although beforehand, she tried to convince Wonder Woman to help join her cause.

Aresia was an orphaned child from a village somewhere in Europe filled with conflict as a bloody and senseless civil war there ruined the land and drove most of its residents, including neighbors, friends, and schoolmates, away, and its unjust victors denied even the basic humanity of their defeated enemies. She and her unidentified birth mother went on to seek out and board a refugee ship to escape the burning village they were forced to leave, but it was later taken over by pirates. The pirates cowardly sank the ship and killed many individuals, presumably including Aresia's own mother. Aresia survived by clinging to a floating piece of the ship and arrived on the shores of Themyscira, where she was taken in by Hippolyta, who "magically endowed her with Amazon strength".

She began her quest in exacting vengeance on the world's male population. She took in several members of Lex Luthor's Injustice Gang, including Star Sapphire, the Shade, Copperhead, and Solomon Grundy, and recruited a new member, Tsukuri.

She sent her minions to steal chemicals and other miscellaneous equipment before revealing her master plan: to wipe out the entire male population with biological warfare and rid them with disease. At the end of part one, she released her virus, poisoning every male in Gotham City, including the males of both the Injustice Gang and the Justice League. The virus had no effect on females.

Watching all of the chaos unfolding, Star Sapphire and Tsukuri were in shock at how easily Aresia's poison had downed the men and boys of Gotham. Tsukuri asked Aresia if, for certain, the poison only affected men, which Aresia confirmed, saying that that was why it had not hurt her or Star Sapphire. Star Sapphire asked Aresia what she had to gain from her plan. Aresia replied that she hoped to end the "greed, deception, and cruelty" wrought by men. "Today, we women take control," she concluded. "You can't be serious," Star Sapphire said skeptically. With an evil grin, Aresia simply responded, "Can't I?" Nonetheless, despite the initial shock and horror displayed by both female Injustice Gang members, they ultimately joined in Aresia's efforts enthusiastically.

Aresia and Tsukuri infiltrated an air base to steal one of their planes and sent Star Sapphire to find Wonder Woman and Hawkgirl, pretending to still want to live in a world with men. The female Leaguers arrived at the air base, where the ruse was quickly exposed, and Aresia offered them both a chance to join her cause. Wonder Woman refused, telling her that while man's world wasn't perfect, destroying it wasn't the answer. The heroines fought Aresia and her group, but the two were defeated and unable to stop them from taking off with Hippolyta, whom Aresia had taken hostage prior to their arrival. Aresia told Tsukuri and Star Sapphire that she planned to enter a rocket launch base in order to shoot the missiles up into the air in order to spread the toxin worldwide using the winds and the atmosphere. Meanwhile, Wonder Woman and Hawkgirl recovered and were able to catch up to and enter the stealth bomber.

The heroines fought Aresia's group once more, and Wonder Woman ultimately knocked Star Sapphire out of the fight. Hawkgirl managed to damage the launch bays of the plane to prevent the missiles from being launched, but also put the plane in jeopardy, which caused Tsukuri to panic and abandon Aresia. As Wonder Woman and Hawkgirl had the upper hand, Aresia tried to reason with them by saying that the men were their enemies.

However, Hippolyta, who managed to free herself from Aresia's captivity, arrived to drop a bombshell. Ironically, Aresia would have died had the captain of the ship on which she and her mother had been, a man, not saved her from drowning back in the pirate attack. He had valiantly swam through the ocean with her on the driftwood until they made it to Themyscira, where he had died of heart failure. Hippolyta had buried him there in an unmarked grave due to his bravery, making him the only man buried on the island.

Aresia was furious at Hippolyta for not having told her this sooner, but Hippolyta reasoned that she hadn't thought of that man as important, simply due to him being a man. Ultimately, her reveal was dismissed by Aresia with the cold remark that "the acts of one man cannot redeem the sins of his kind." In a final fight with Wonder Woman and Hawkgirl, Aresia's plans were ultimately thwarted, as she was killed when her plane exploded.

Soon after her death, Wonder Woman and Hawkgirl discovered Aresia's hideout, recovered the notes used in making her poisonous allergen, and were able to develop an antidote that was distributed to every man in Gotham who had been affected, curing the men and saving the day.

While not being born an Amazonian, Aresia herself was magically endowed with several Amazonian abilities (save for the ability to fly like Wonder Woman and their immortality): 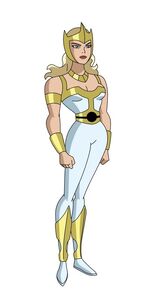 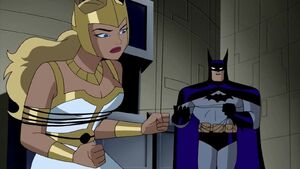 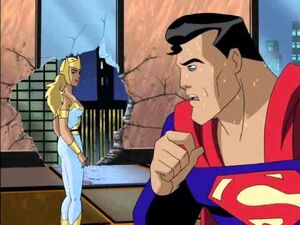 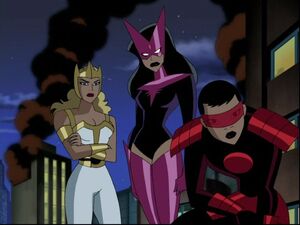 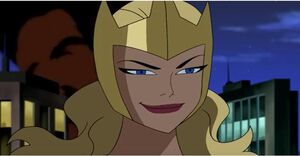 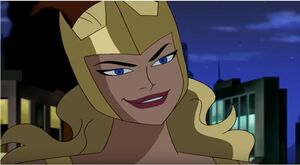 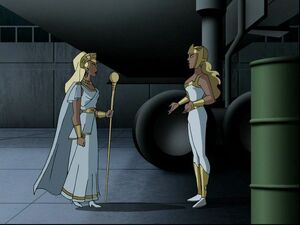 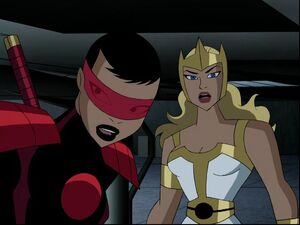 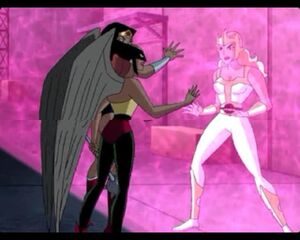 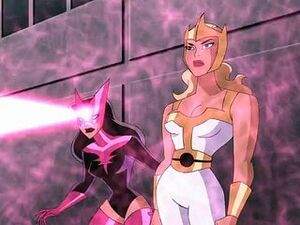 Aresia and Star Sapphire.
Add a photo to this gallery 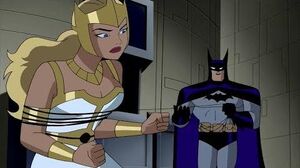 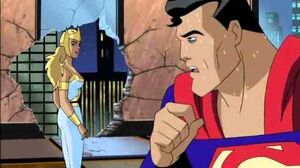 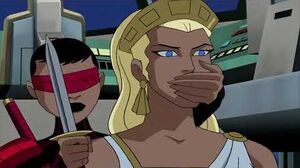 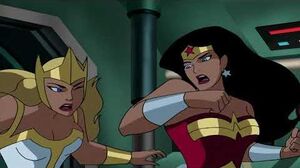 Wonder Woman vs. Aresia!
Add a photo to this gallery

Retrieved from "https://villains.fandom.com/wiki/Aresia?oldid=3532913"
Community content is available under CC-BY-SA unless otherwise noted.