Deity of Sin
Member of the Seven Sages
Eggplant farmer

Trying to kill Neptune and her friends.

Arfoire (also known as Majekon'nu) is the main antagonist of the videogame series Hyperdimension Neptunia. She will not stop until she defeats the four goddesses and takes over Gamindustri once and for all. She used to be an acquaintance with Histoire but after splitting Gamindustri into four parts, Arfoire turned against her and decided she wanted to have all of Gamindustri.

In Mk2, She has a one on one duel with Nepgear in the True Ending. She is called the Deity of Sin and seeks to destroy Gamindustri. She is also a CFW and the main purpose for ASIC is to resurrect her.

She was voiced by Chiaki Takahashi in the Japanese version and voiced by Laura Post in the English version.

Arfoire uses multiple aliases on different landmasses as she manipulates behind the scenes.

Histoire reveals that Arfoire is her greatest nemesis and did all of this to change herself. The group realized about Arfoire's plan was to gain Histoire's powers and then overwrite herself as the complete being known as the True Goddess. But Arfoire mentions that they are missing a one part piece in her plan which will be revealed in the battle. The party defeated Arfoire, but they felt it was not over yet as they can still feel Arfoire's presence, which they were right after Arfoire's return and proceeded to battle the party again. After Arfoire is once again defeated by the group, Histoire warns her this is her last chance of redemption as her powers are running out. But Arfoire refuses and transform into a dragon while saying becoming the True Goddess was her true desire, but was no longer the case as she awaken her inner evil to fulfill her selfish goal.

Neptune and her party fights Arfoire in her third form and defeats her again and vanishes. Although the party won against Arfoire, they whether or not she would return again.

She is later resurrected by ASIC and appears in another form in the Graveyard of Gamindustri under the name CFW Arfoire. She engaged in battle which she lost.

In the non-canon Conquest ending, After Nepgear slays Arfoire with the magic sword, she laughs it off, claiming she will return and destroy Gamindustri once it collapses without the other goddesses to continue to innovate and improve it.

In the true ending, Arfoire merges with the graveyard after deciding to find a new vessel. Arfoire revives the CFWs, but were defeated by Nepgear and her friends and meet Arfoire in Gamindustri Graveyard and end up in a climatic battle. As Arfoire is defeated by Nepgear, she attempts to destroy Nepgear but fails.

In this dimension, she thinks the meaning of her life is the annihilation of anything related to the goddesses. She claims that she doesn't like hanging with others but has shown to have sympathy towards the Seven Sages' idea to push aside the goddesses, so she participates in their operations. She is also to have a strong hostility towards Neptune.

In the Zero Dimension, it is revealed Arfoire was behind the Dark Purple giant attacks. She attacks Neptune and her friends, but was thwarted by Uzume's ability to create share energy, allowing Neptune and Nepgear to transform and defeats Arfoire. Later, she baits Neptune and her friends into a trap in a Colosseum by placing a large share crystal. She is presumably, but Croire agrees to give her the power of a lost CPU because Croire found it "more interesting" to watch Zero dimension be destroyed. She then revives Dark Purple and fights Neptune and her party, injuring Uzume in the process.

Arfoire is a witch with a gothic appeal, dressing in black with hints of purple. She is gray-white skinned with blood red eyes, slightly slanted like a cats. She has dark makeup around her eyes and lips and a very big witch hat with a golden leaf and thorn Purple rose spiraling around. Her outfit is very flashy in terms of design, consisting of a bustier like top with thick bands/strings going up the center to hold it together, along with unattached sleeves and very noticeable clawed nails.

Her hair almost resembles Neptune's in terms of color. However, in terms of appearance, it's shoulder length with very short slanted bangs and hair framing her right cheek. It's revealed her true form however, is indeed a big Dragon.

In MKII, Arfoire doesn't appear until the last act of the game and has two forms. The first is a very large monster-like form. The second is more resembling of a CPU that looks oddly rabbit-like.

In V, Arfoire has changed in terms of clothing, wearing a bigger witches hat with golden lining and a heart-like shape in the center with a red gem-piece in the center. At her neck is a purple feathery/furry collar with gold and red gem ornament in the center. Her outfit this game mainly takes a black, purple, gold, and red accent theme with mainy red "gem" like pieces. Her earrings seem to have changed as well, and her hair seems slightly longer.

She has a low tolerance for failure and can be a sore-loser who despises losing above all else. She can be very loud and very short tempered. Histoire notes how much she is similar to Blanc. She is also very manipulative and plays mind games with her enemies as shown with Nepgear in the Conquest ending.

Arfoire will always gloat and boast, and at any given moment will make a special/impacting entrance. She's also fond of giving a dramatic laugh when she enters. 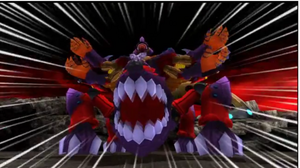 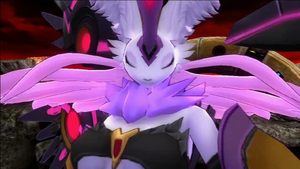 DOS Arfoire's Face
Add a photo to this gallery

Retrieved from "https://villains.fandom.com/wiki/Arfoire?oldid=3757093"
Community content is available under CC-BY-SA unless otherwise noted.