To collect all seven code keys so that he can reign supreme over both humans and Digimon alike.

He was voiced by Hanawa in the Japanese Version.

While Gaomon and Lalamon were fighting an army of Goblimon, Agumon and Rhythm set out to find Argomon. Once encountered, Argomon attacks Agumon by seizing him with a clawed tentacle and zapping him. Although Rythm orders him to stop, he seizes her and zaps her as well. Agumon regains his strength and blasts Argomon with his Pepper Breath attack, burning him.

Angered by this, Argomon transforms into his Mega form and rampages. Marcus suddenly arrives to the scene and allows Agumon to Digivolve to his Mega form, ShineGreymon. Although strong, Argomon overpowers him. ShineGreymon becomes his Burst Mode and destroys Argomon for good, reverting him back into a Digi-Egg.

A swarm of In-Training-level Argomon are born from Digi-Eggs in August 2020. They then spread through the Network and cause machines in Tokyo to malfunction. Some also attack Koromon. Among the incidents caused by them, the Tokyo Loop Line's control system malfunctions, prevent railway trains to stop on their stations. Taichi Yagami and Agumon fight the Argomon destroying them one by one, until a remaining one digivolves twice, causing one of the trains to speed up and enter collision course with the next train. It is destroyed by Greymon, causing the Loop Line's controls to return to normal and the emergency stop to be activated. Before they can celebrate however they learn that the American military network has been hacked. Tokyo Digital Crisis As Taichi, Greymon, Yamato Ishida, and Garurumon travel to that area in the Network they come across a large group of In-Training Argomon being lead by a Rookie Argomon. As they clear out the In-Training Argomon the Rookie Argomon quickly digivolves twice into its Ultimate form, though through teamwork Greymon and Garurumon are able to defeat it whilst it's in its Worm Phase form. As they celebrate, Argomon digivolves once again and now in its Mega form easily defeats Greymon and Garurumon. Time runs out and the Argomon's hack successfully launches a missile towards Tokyo. As all hope seems lost, Greymon and Garurumon suddenly DNA digivolve together to form Omnimon.

Argomon is a Digimon. He has two different forms, an Ultimate form and a Mega Form.

In this form, Argomon resembles a dark humanoid that wears a dark robe-like outfit. His outfit also has yellow feathers, vine-like whips with two claws on each vine, and four eyes on his outfit. In his Worm Phase form, he is a colossal parasite. His four eyes are bigger and his head is on top.

In this Form, Argomon has more of a monsterous form as oppose to a humanoid form. Here, Argomon has green vines on his head, arm and back. 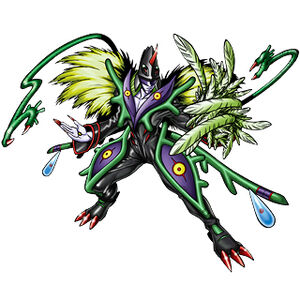 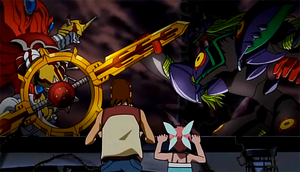