The Fifteenth Colossus, nicknamed Argus, is a major antagonist from the video game Shadow of the Colossus. It is the fifteenth boss encountered in the game and a vessel for the essence of Dormin.

Argus, along with the other sixteen Colossi, were created by Lord Emon to contain the fragmented essence of the defeated evil Dormin. He set them all to wander the Forbidden Lands, destroying anyone that comes their way, so that Dormin could never be resurrected.

Argus is the fifteenth colossus he encounters, dwelling among cliffs near a ruined city. It climbs the cliff, and immediately attacks Wander by trying to step on him or attack with its cleaver. Wander must scale the ruins on either side of the battlefield while Argus attempts to crush him or bring the ruins down on top of him. When Wander reaches the top of the ruins, he must trick Argus into smashing the bridges connecting either side so that he may have a vantage point to jump onto Argus' fur. Once Wander does this, Argus will violently attempt to throw him off, but Wander must attack Argus' sigil on its head (and back if in Hard mode). Wander then must make his way to Argus' hand and stab it, causing Argus to drop its cleaver. This will allow Wander to get onto the palm of the colossus' hand and stab its final sigil until the giant dies, collapsing to the ground and releasing the fragmented essence of Dormin contained within its body.

Argus' corpse can be seen as the credits roll. 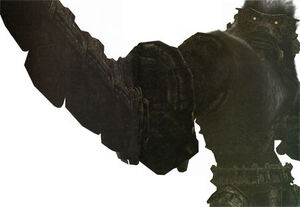 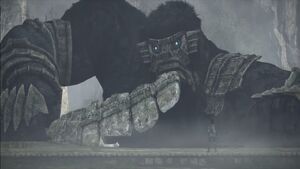 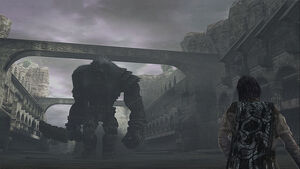 Argus facing off against Wander. 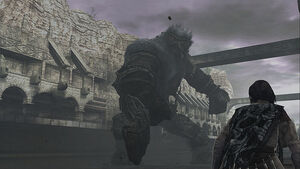 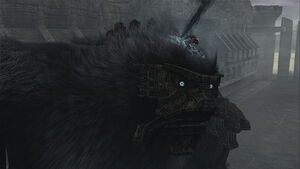 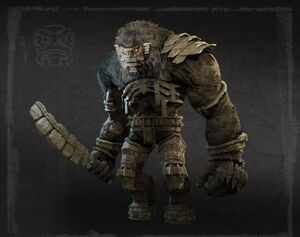 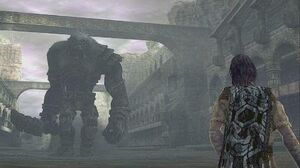 Retrieved from "https://villains.fandom.com/wiki/Argus?oldid=3262330"
Community content is available under CC-BY-SA unless otherwise noted.