Complaining about her hair.
Torturing and killing people.

Bring Tatsumi to her warehouse (failed thanks to Akame and Leone).

Aria was a minor antagonist in Akame Ga Kill!, she was the daughter of a missionary, and a wealthy girl who Tatsumi met in the capital. She is initially thought to be a sweet and polite girl, who offering a shelter for Tatsumi, when he was on street as a beggar, Aria herself was an evil and cruel girl and she and her parents had a dark secret.

Aria was born from an unnamed couple, since she was a little girl, she took to torturing and killing the peasants, in the company of her parents.

Aria was a rich girl, who lived in the capital of the empire, with her parents, she offered to Tatsumi a place to stay when she found the boy on the streets after being deceived by Leone, she came from a wealthy family and had the habit of offering a place to stay at her mansion. She then introduces Tatsumi to her parents, who agreed to help him find his friends, Sayo and Leyasu, who were separated from him upon arriving at the capital.

The next day, Tatsumi helped Aria during the shopping with her guards, and the time the same evening, the Night Raid came to attack the mansion, the organization killed Aria's parents, and one of the guards tries to hide his lady in the warehouse behind the mansion, as Tatsumi manages to find her with Akame arriving shortly after. Tatsumi then tries to defend Aria, unaware of the girl's true dark nature, but Leone revealed the contents of the "warehouse" as Tatsumi looks with horror and shock. Inside the warehouse were several tools of torture of all centuries, as dozens of corpses of elderly, men, women, children and newborns were tortured and killed in all inhumane ways imaginable.

All people within the warehouse were killed by Aria and her parents for her to find all the people who came from outside the capital as unclean animals and had right to torture and to kill as many of them she wanted.

Tatsumi found out the truth of how Aria and her parents had an interest to attract people of the country to its place and torturing them to death, which was why Night Raid was dispatched to kill them. Tatsumi witnessed the death of his friend Sayo while Ieyasu was seen alive and suffering. Ieyasu explained that his pain was at the hands of the Aria's family. Aria then admitted her part in the act, showing no remorse in telling them how she tortured Sayo. Akame and Leone prepared to kill her, though Tatsumi stopped them and they believe he was defending her. However, Aria was then quickly killed by Tatsumi who wanted the right to do it. Ieyasu was pleased by this sight before he succumbed to his tortured and died in Tatsumi's arms.

Aria initially appeared to be a very kind and caring girl, but this was just to disguise her true nature, when in reality, like her parents, she was cruel and sadistic, who enjoyed kidnapping the peasants, and torturing them until death.

She was also a manipulative and hypocritical girl, since with a sweet and friendly look she tricked her guests, and also initially had a hatred toward Sayo, due to her hair style.

Despite her sadistic nature, Aria had a childish nature, which contrasts to her real personality. Aside torturing, she enjoyed shopping like all girls and women, and spent her time complaining about her rebellious hairs. It is assumed that she was bipolar, as shown when Tatsumi learnt the truth and then proceed to confront her, before she met her demise.

Aria was xenophobic, in fact like her parents, she hated and despised the peasants, the girl call them scum and unclean animals. 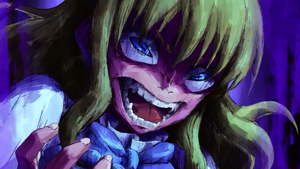 Aria showing her sadistic side. 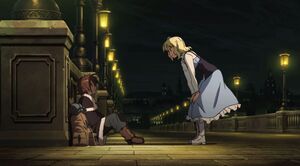 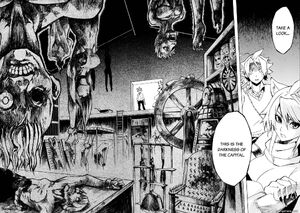 The deposit of Aria and her parents. 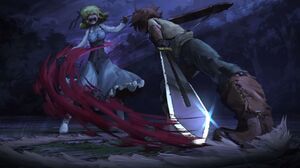 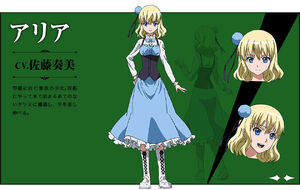 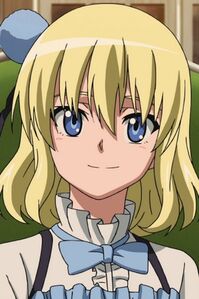 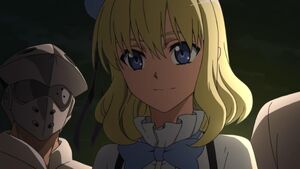 Aria with her guards. 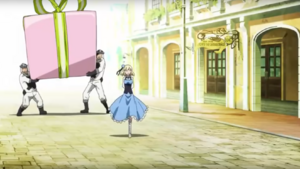 Aria going shopping with her guards. 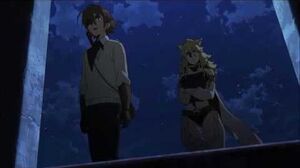