To do whatever Uber A wants.

Aria Montgomery is one of the main protagonists of the Freeform series Pretty Little Liars. However, in the series' seventh season, Aria becomes the secondary antagonist.

Aria is one of the Liars, the group of girls being tormented by "A". However, when Uber A takes over, they offer Aria the chance to join the A-Team, in exchange for them protecting her secret. She accepts and becomes "A.D.'s" helper.

She is portrayed by Lucy Hale.

Aria receives a video chat from "A.D.", claiming to have intel in her file that could ruin her relationship with her fiancée, Ezra. "A.D." video chats with her again and tells her to meet them. She goes to the location and sees a limo. The door opens and she enters to see "A.D." sitting there. They reveal themselves as Sydney Driscoll, who quickly admits to shooting Spencer, rescuing Jenna from the blind school, and creating the board game. She offers Aria the chance to join the A-Team and Aria realizes she is wearing an earpiece and the driver of the limo is the real "A.D.", prompting Aria to confront Sydney. Sydney reveals that Aria has a long way to go to prove herself to "A.D." and they leave Aria at an unknown location.

At the end of the episode, "A.D." asks Aria, via text message, if she has made a decision yet.

In the Eye Abides the Heart

Aria finally accepts "A.D.'s" offer, giving in to their threats. She is tasked with giving them information on the Liars, and then delivers them Lucas's comic book. In return, she is given a black "A" hoodie.

The Glove That Rocks the Cradle

Aria breaks into Alison's house as "A" and trashes Emison's nursery for "A.D.". She tears down the crib mobile and replaces it with one of "A's" dolls and then she demolishes the room, narrowly escaping.

"A.D." sends Aria to the Hastings' house to deliver an "A" message. She connects a phone to their Bluetooth speaker and drops it in a moving box and leaves. The phone then begins to play a recording of Peter Hastings and Mary Drake arguing. Later, she is gifted a puzzle piece and breaks into Alison's house again in her "A" uniform to place it on the game and retrieve her file.

"A.D." gives Aria a phone and asks her to meet them, also requesting that she wear the "uniform". Aria shows up dressed as "A", however Mona has already figured out that Aria is on the "A.D."-Team and has told the other Liars, who are waiting for Aria and confront her about her collaboration with "A.D.", to which she defends her actions but they are not happy and leave.

Aria officially defects from the A-Team in this episode and becomes a hero/protagonist again. 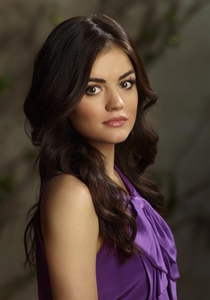 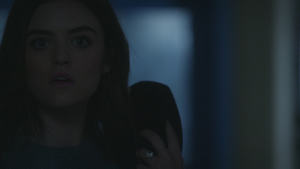 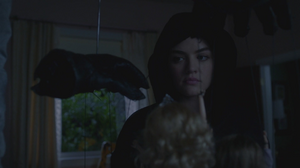 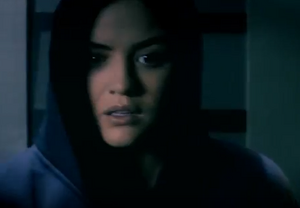 Aria is almost caught in the act 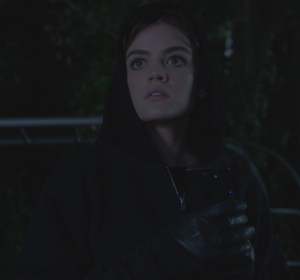 Aria tries to meet with "A.D."
Add a photo to this gallery

Retrieved from "https://villains.fandom.com/wiki/Aria_Montgomery?oldid=3364777"
Community content is available under CC-BY-SA unless otherwise noted.