Ariana (Japanese: アテナ Athena) is one of the four Team Rocket Executives introduced in Pokémon Gold and Silver. Her name wasn't revealed until Pokémon HeartGold and SoulSilver. The four executives serve as the main antagonists of these four games as well as Pokémon Crystal. Ariana is identified in dialogue as the interim boss in Giovanni's absence.

At first, Ariana seems to appear in Pokémon FireRed and LeafGreen as an unnamed female Team Rocket Admin in the Rocket Warehouse on Chrono Island. After the player defeats her, she seems to understand their motivations for opposing Team Rocket and flips a switch to redirect the spinners nearby to give the player easier access back from the warehouse entrance.

Like the other Executives, Ariana was given a major makeover in Pokémon HeartGold and SoulSilver. Her identity was expanded on, her color scheme was noticeably changed, and her hair was restyled. 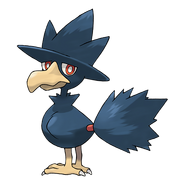 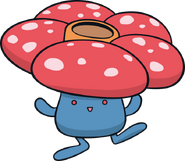 Vileplume (two)
Add a photo to this gallery

Retrieved from "https://villains.fandom.com/wiki/Ariana?oldid=3365292"
Community content is available under CC-BY-SA unless otherwise noted.