Adulterer
Bigot
Archenemy
Egotist
Arianna the Bear is a recurring antagonist in the FOX animated series, The Cleveland Show. She is the wife of Tim the Bear and mother of Raymond the Bear and next door neighbor to The Brown-Tubbs House. She's had many affairs with her husband and is frenemies with Donna Tubbs-Brown. Very rarely, she has made offensive and vituperative comments about other religions, and tries to force her own onto others.

She is voiced by Arianna Huffington .

In "Ladies' Night", Donna mentioned how judgmental Arianna was, back when she was a single mother. Throughout the episode, Arianna still criticized her, this time, because of the quality of her husband.

In "From Bed to Worse", she and her husband were given the responsibility of chaperoning the Stoolbend High field trip to Washington, but she mostly nagged her husband the whole time. One night, she and Tim left the kids of the field trip unattended in a motel, which soon caught on fire, nearly killing Roberta. Junior took matters into his own hands and saved everyone, while she and Tim had public sex on The Lincoln Memorial. Neither of them got any flak for what they did.

In "A Cleveland Brown Christmas", she made an antisemitic comment about Mrs. Lowenstein running a school Christmas play, saying that a Jew shouldn't be put in charge of that.

In "Cleveland Live!", Arianna started sleeping with Robert, saying that Tim was not the man he used to be and therefore, no longer satisfying. Instead of Tim doing the right thing and kicking her out of his house, he was still in love with Tim and desperately clasped onto her, begging for her to take him back. It wasn't until he manned up and beat Robert in a fight, that she allowed him back into her life.

In "Die Semi-Hard", she played the role of Alexander, or at least a female variant of him, in the Die Hard parody. She invaded Waterman International and held everybody hostage. Her version of Alexander featured her as being the wife of Tim Gruber, (the show's parody of Hans Gruber).

In "Turkey Pot Die", she had a not-so-friendly competition with Donna, over who had the best Thanksgiving parade float. When Arianna saw that Donna was beating her, she vandalized her float, by spray painting it and tearing it apart.

In "Who Done Did It?", Arianna picked a fight with Donna, insulting her over her free recording lessons. This provoked Donna to have a public fight with her. During, Arianna clawed Donna and gave her a bunch of scars.

In "Of Lice and Men", Tim mentioned that Arianna regularly cheats on him with his father.

Arianna the Bear is basically the female version of her husband. She has the same character base, being an orangeish brown colored anthropomorphic bear. Only she has short orange hair and a big seafoam green dress with a white trim. She also has white pearl earrings, a white pearl bracelet, and red lipstick. Her only physical differences from her husband, aside from her hair and clothing attire would be her eyelashes and large breasts.

Arianna has hatred for every other woman she sees, even if they're good friends of hers, like Donna and Fern Stapleton. She feels the need to always be superior to everyone else and be the best woman on the street. 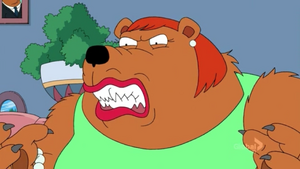 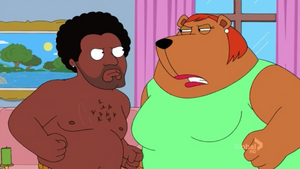 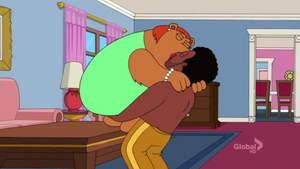 Arianna cheats on Tim with Robert. 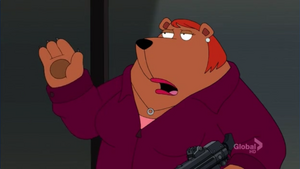 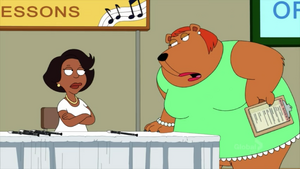 Arianna being the archenemy to Donna.

Arianna, portrayed by a celebrity impersonator.

Arianna's cameo in the Family Guy episode, "No Giggity, No Doubt".